President proposes in state of the union speech to parliament on the eve of country’s 74th independence anniversary. 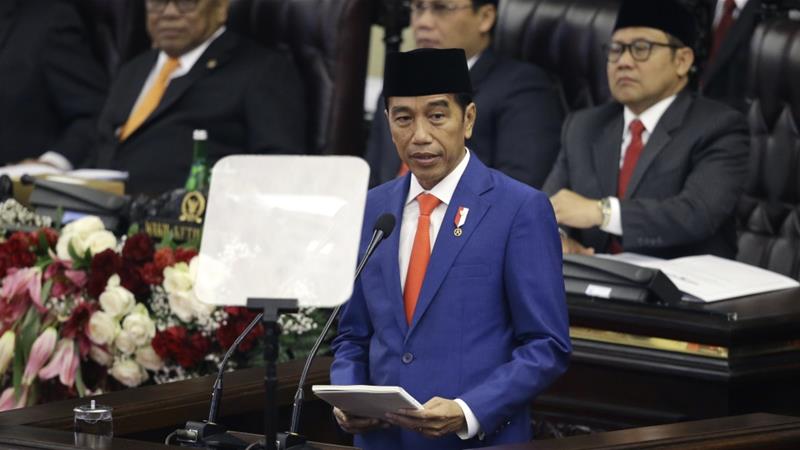 Indonesian President Joko Widodo has formally proposed to parliament a plan to move the country’s capital from Jakarta, on the crowded island of Java, to Kalimantan on the island of Borneo.

Widodo, also known by his nickname Jokowi, made the proposal during his state of the union speech at parliament, a day before the country celebrates its 74th independence anniversary.

“I hereby request your permission to move our national capital to Kalimantan,” said Widodo, who will be sworn in for a second term in October after winning April’s election.

“A capital city is not just a symbol of national identity, but also a representation of the progress of the nation. This is for the realisation of economic equality and justice,” he said, without specifying the exact location for the new capital.

Prone to flooding and rapid sinking because of uncontrolled groundwater extraction, Jakarta is the archetypical Asian mega-city creaking under the weight of its dysfunction.

Only four percent of Jakarta’s waste water is treated, according to the government, polluting rivers and contaminating the groundwater that supplies the city.

Congestion is estimated to cost the economy $6.5bn a year.

Improving inadequate infrastructure in the country of 260 million has been Widodo’s signature policy which helped him win a second term in the elections earlier this month.

Jakarta has a population of about 30 million in its greater metropolitan area.

In April, Planning Minister Bambang Brodjonegoro said a new capital would require an area of 30,000-40,000 hectares and it will have a population of between 900,000 and 1.5 million.

“This is a big job, impossible to take just one year, it could take up to 10 years,” he was quoted at that time.