Inside the State Banquet: How Queen treated President Trump to dinner

Inside the State Banquet: How the Queen treated President Trump – and 170 guests split into some VERY intriguing pairs – to dinner of Windsor lamb and strawberry sable in the Buckingham Palace ballroom

Donald Trump dined with the Queen as she granted him the highest honour possible for a visiting world leader this evening.

The US President and First Lady joined about 170 guests for the State Banquet in the ballroom of Buckingham Palace, where Melania was seated next to the Prince of Wales.

The President entered through the East Gallery after arriving for the banquet just before 8pm in his Marine One helicopter. 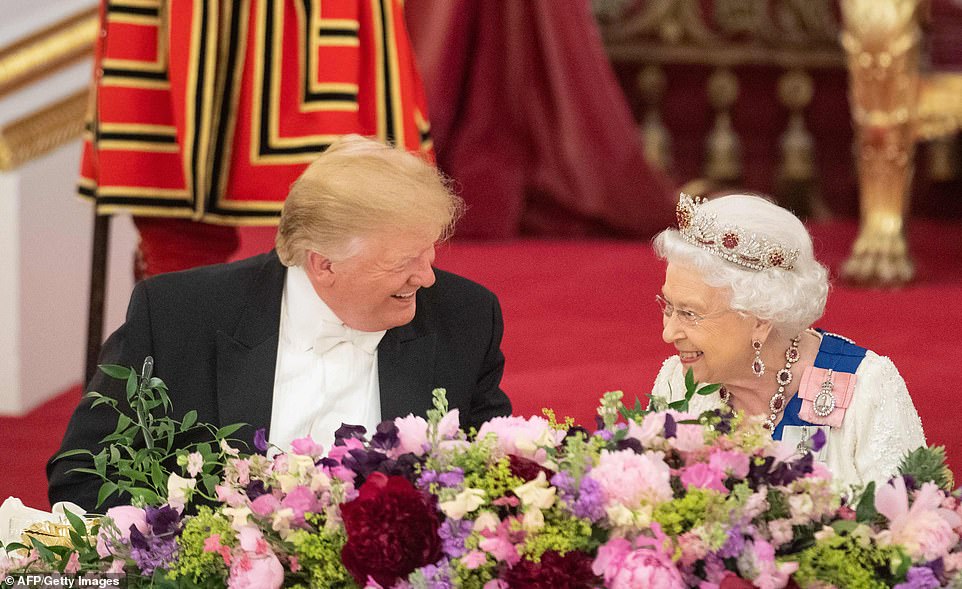 U.S. President Donald Trump sits with Queen Elizabeth at the State Banquet at Buckingham Palace in London last night as the Republican was granted the highest honour possible for the monarch to give a visiting world leader 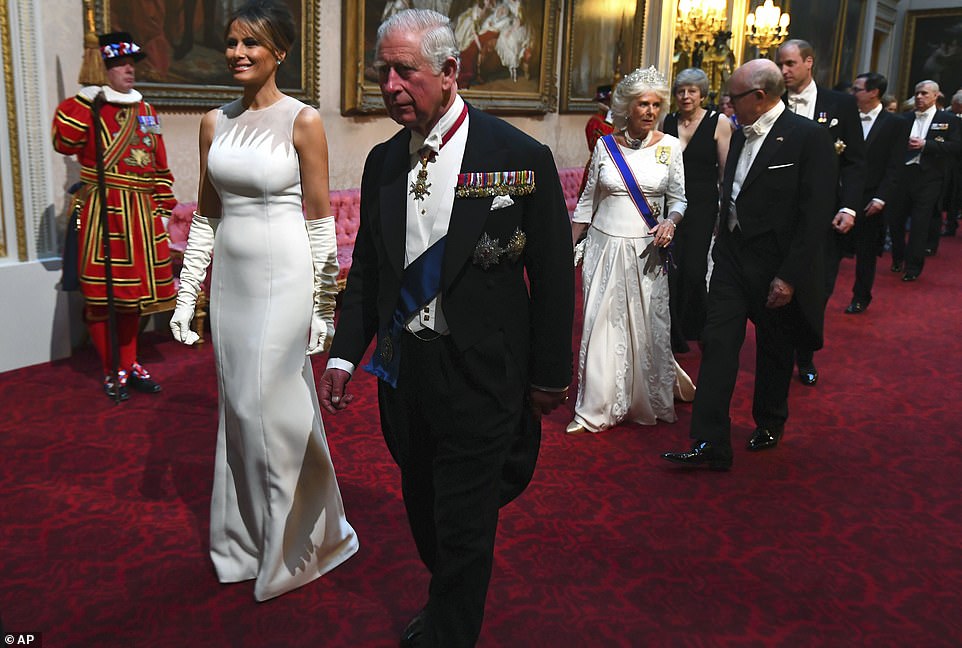 Pictured: First Lady Melania Trump walks alongside Prince Charles as they enter the ballroom for the State Banquet to welcome the US President 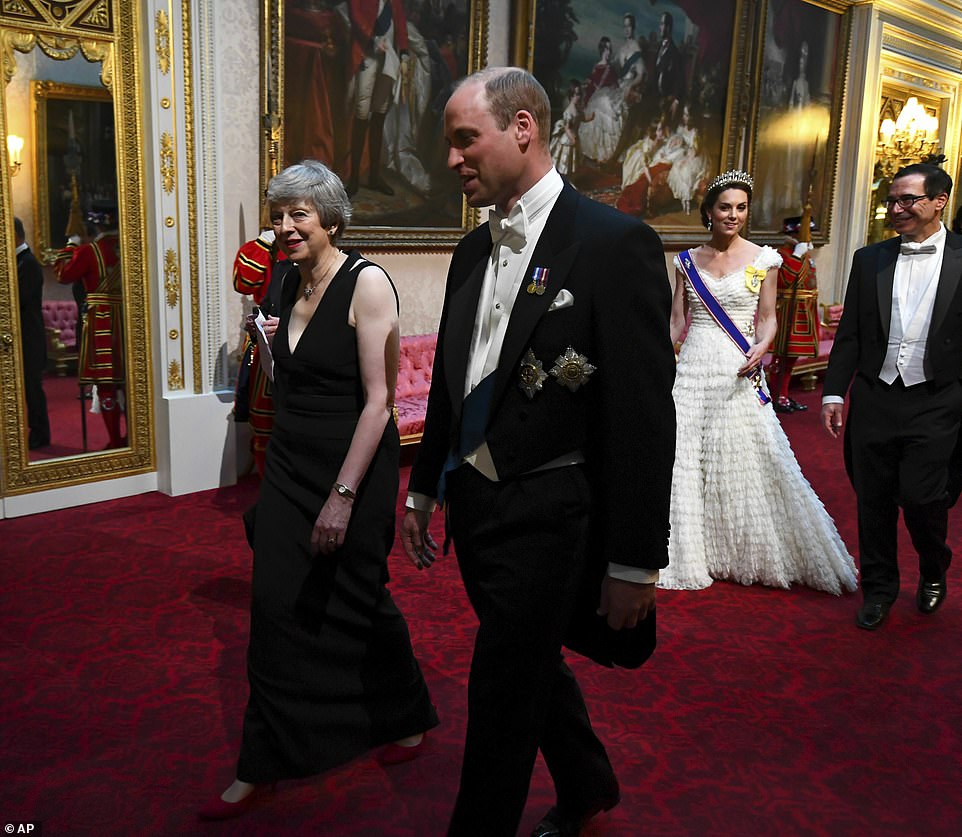 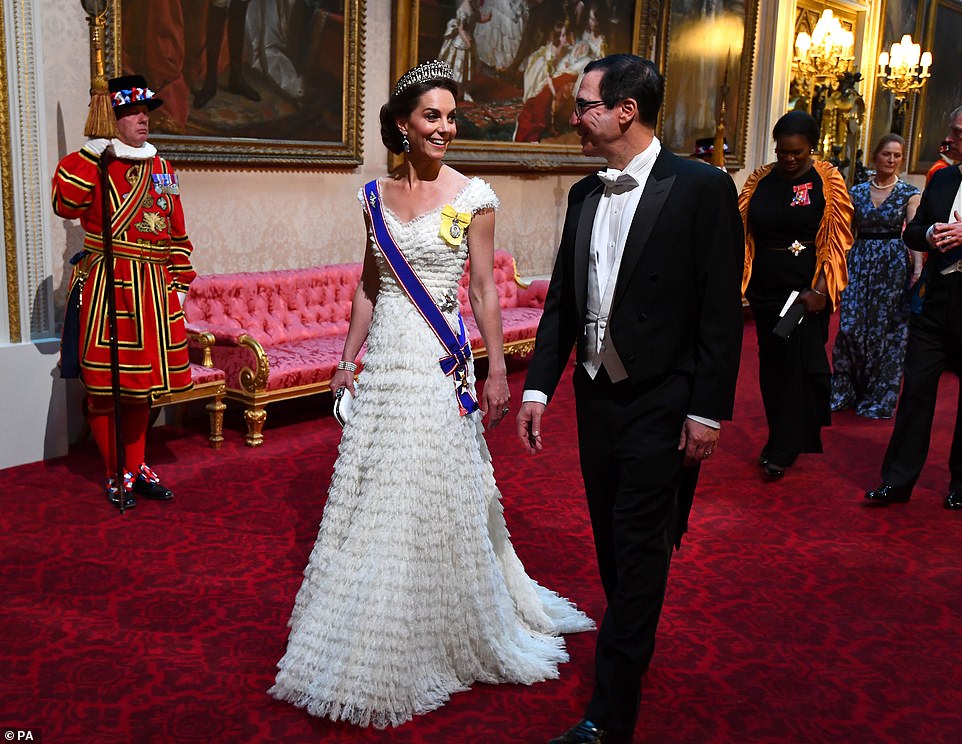 The Duchess of Cambridge and United States Secretary of the Treasury, Steven Mnuchin arrive through the East Gallery during the State Banquet at Buckingham Palace 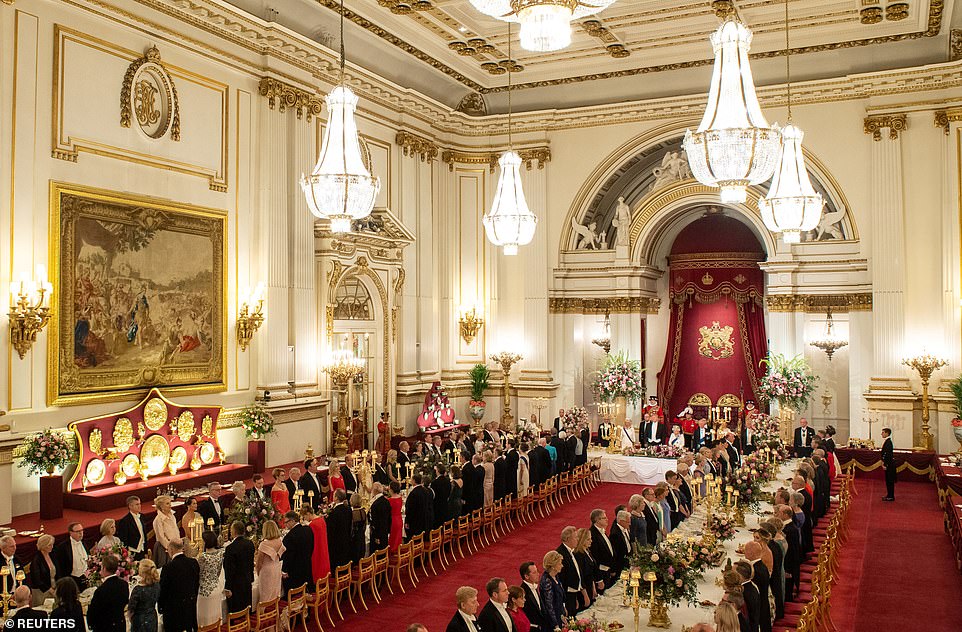 Inside the State Banquet: About 170 guests are pictured seated in the ballroom of Buckingham Palace as they attend the dinner for Donald Trump

The Duchess of Cornwall sat on the other side of the president. Also at Camilla’s side was US ambassador Woody Johnson. William was between the Prime Minister Theresa May and Mr Johnson’s wife Suzanne Ircha.

The Duchess of Cambridge sat between US secretary of the treasury Steven Mnuchin and the Lord Mayor of London Peter Estlin.

The president’s daughter and adviser Ivanka sat between the Countess of Wessex and International Trade Secretary Liam Fox, while Ivanka’s husband Mr Kushner, a senior adviser to Mr Trump, had the Princess Royal on his right and Mark Carney, governor of the Bank of England, on his left. 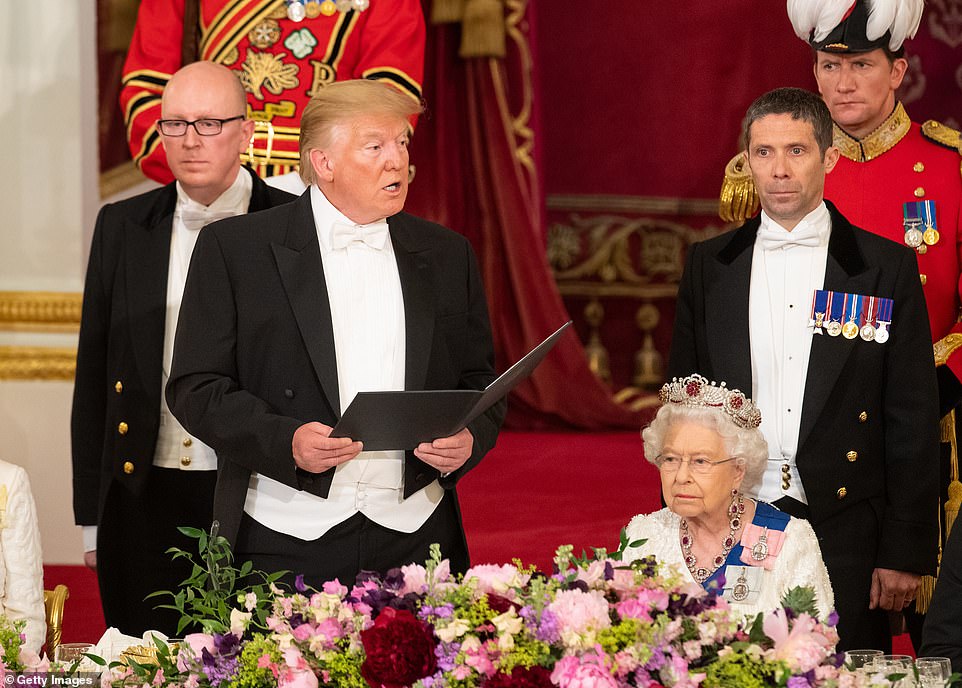 President Donald Trump makes a speech as Queen Elizabeth II listens during a State Banquet at Buckingham Palace. The President spoke of the sacrifice made by British and American soldiers on D-Day

The Duke of Sussex, who was at the private lunch earlier, was noticeably absent, as was the Duchess of Sussex, who is on maternity leave looking after their four-week-old son, Archie.

Labour leader Jeremy Corbyn declined his invitation to the dinner, which comes ahead of commemorations marking the loss of American and British life on D-Day.

A steamed fillet of halibut with watercress mousse, asparagus spears and chervil sauce served as the banquet’s starter, followed by a saddle of new season Windsor lamb with herb stuffing, spring vegetables and port sauce. 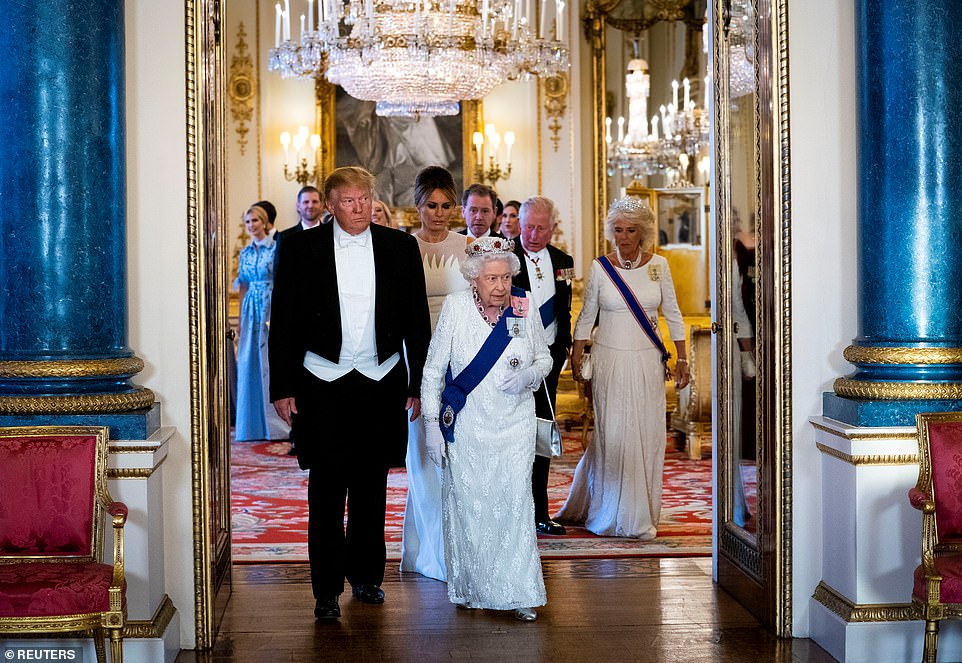 Dessert was a strawberry sable with lemon verbena cream – made of crisp biscuits, smooth pastry cream and fresh fruit. Palace staff spent three days laying the table, on which napkins are folded like dutch bonnets.

The dress code was tiaras and white tie, or national dress. The guests, invited due to their ties with the US, ate from priceless dinner sets.

Their plates were spaced exactly 18 inches apart and glasses and chairs were all the same distance away from the table edge. Six glasses were set out per guest, with a special cushion placed on the Prince of Wales’s chair.

As is customary, the Queen inspected the horseshoe-shaped table herself in the afternoon, making her way round the room and checking the preparations with the Master of the Household, Vice-Admiral Tony Johnstone-Burt.

Nineteen stations surrounded the table and each was manned by four members of staff – a page, footman, under butler and a wine butler.

Preparations in the kitchens were made as close to the event as possible – with every dish handmade from scratch. Royal chefs had presented four possible alternatives to the Queen before she settled on one for the state visit.