At the United Nations Anti-Racism conference, Iran’s foreign minister says his nation’s “willpower is dedicated,” to the elimination of Zionism.

With the United States and 33 other nations boycotting a banner UN anti-racism conference due to its history of antisemitism Wednesday, Iran’s new foreign minister invoked the destruction of the Jewish state, perhaps observers say, giving the countries who boycotted the conference an even bigger reason to have stayed away.

The event, known as Durban IV, had the theme of “Reparations, racial justice and equality for people of African descent.” Wednesday’s event was to commemorate and adopt a statement 20 years after the first meeting in Durban, South Africa. While the original purpose of the event was combating racism, critics say it has been hijacked by an anti-Israel agenda that turned it into an anti-Semitic hate fest leading the U.S. and Israel to walk out of the first conference. 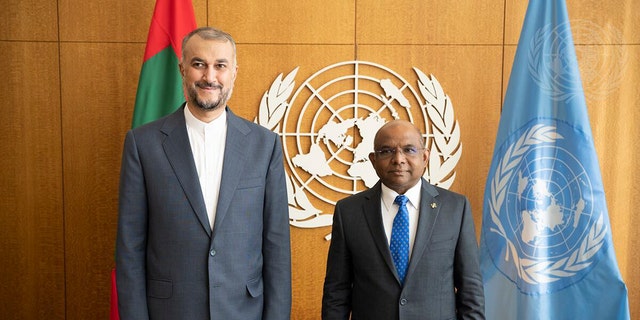 Iran’s new foreign minister, Hossein Amir Abdollahian who is in New York this week for the UN General Assembly said his country was against all forms of racism while threatening the existence of Zionism.

“As the new foreign minister of the Islamic Republic of Iran, I’m honored to announce that my nation’s willpower is dedicated to the total elimination of all forms of racial discrimination, including apartheid and Zionism.” He continued, “These are crimes that constitute horrible atrocities such as child killing and the creeping occupation through settlements, which extends to the proximity of al-Aqsa mosque.”

Behnam Ben Taleblu a senior fellow at FDD who focuses on Iran told Fox News that, “Abdollahian didn’t mince words: the Islamic Republic will use every opportunity afforded to it to seek “the total elimination” of Zionism. That is code for working towards the destruction of the Jewish state.”

He said the new foreign minister’s words should serve as a warning to the Biden administration about engaging with the regime in Tehran. “Washington should understand that working zealously to engage Iran with the aims of reviving the flawed 2015 nuclear deal not only makes no strategic sense given Iran’s irreversible nuclear advances in 2021 but would result in yet another infusion of cash to the world’s foremost state sponsor of terrorism. That would mean men like Abdollahian would be in a greater position to put their money where their mouth is.”

The US ambassador to the UN, Linda Thomas-Greenfield wrote in a statement that, “The United States will not participate in the United Nations 20th Anniversary Commemoration of the Durban Declaration and Program of Action (DDPA) consistent with longstanding U.S. policy going back multiple administrations. The United States remains opposed to the anti-Israel and anti-Semitic underpinnings of the Durban process, and has longstanding freedom of expression concerns with the DDPA.”

Her statement said that the Biden-Harris administration, “are deeply and profoundly committed to advancing racial justice and equity and the elimination of racial discrimination, xenophobia, and discrimination in all forms.” Noting that it was a top priority of her and the administration.

Her statement concluded that, “Racism is a problem in every society. Every country has an obligation to address racial inequality and injustice, both internally and multilaterally. We very much look forward to continuing to work in collaboration with our fellow member states on these critical issues in more inclusive fora.”

Of the sixty  or so countries speaking only three came from the European Union, Belgium, Ireland and Portugal. Also speaking was the UN Secretary General Antonio Guterres, the President of the UN General Assembly  Abdulla Shahid and  the UN Human Rights chief Michelle Bachelet.

Anne Bayefsky, director of the Touro Institute on Human Rights and the Holocaust and president of Human Rights Voices who had organized a counter-conference last week told Fox News that, “For the enemies of Israel who had high hopes that Durban IV would fast track Israel to political isolation and oblivion, the global gathering was instead a major setback. Not only did 34 states boycott, but they boycotted because the demonization of Israel was recognized as a form of modern antisemitism.”

She noted that 75% of the countries speaking at the conference were deemed “not fully free” according to the definition by Freedom House that ranks countries based on freedom,  and noted that “Durban IV proved to be an opportunity for the Iranian Foreign Minister to broadcast over UN WebTV around the world a call for the “elimination” of the Jewish state. In effect, backing another mass genocide for the one they claim never happened. And yet in the 21st century UN, it was just business as usual and nobody interrupted, cut the mic, or escorted him off the premises.”

On the issue of reparations, South African President Cyril Ramaphosa speaking to the conference called upon the UN to take reparations up. “South Africa calls on the United Nations to put the issue of reparations for victims of the slave trade on its agenda. We support the adoption of special measures, including affirmative action programs and targeted financial assistance, as restitution to communities whose ancestors were sold into slavery.”

The Prime Minister of Barbados, Mia Amore Mottley,  called for negotiations with relevant governments, “to seek to ensure that we can negotiated a package of developmental programs, capital transfers, debt cancelations that would us to deliver some semblance of long-overdue justice to our people and our countries.”

She said it was important to “ensure that 2022 is the year that we make critical breakthroughs in our just and righteous quest for the reparations for our people, conscious that all we seek to do is to give our people the best development opportunity that they can have, having been deprived of it for centuries.”

Barryl Biekman the Coordinator of the Monitoring Working Group on the Durban Declaration and program of Action spoke out against what she said was the disinformation and propaganda against Durban and made an appeal for reparations “Reparations is very simple. It’s a very simple payment for a debt that is owed for crimes against humanity which we are committed in various degrees and forms have continued into the 21st century.” She concluded that, “Reparations will be received, as we said in 2001. They stole us. They sold us. They owe us. Reparations now.”

Also speaking at the conference were Russia and China. China’s State Counsellor and Foreign Minister Wang Yi said that the slave trade and colonialism, “are the primary root causes of racism. People of African and Asian descent and indigenous peoples were victims of such practice in the past, and they continue to bear their consequences even today. The relevant countries should at least have the courage to face up to this disgraceful past and take measures to end the sufferings caused by their practices.”

China has long been accused of torturing and imprisoning minority populations including Muslims and other religious groups.