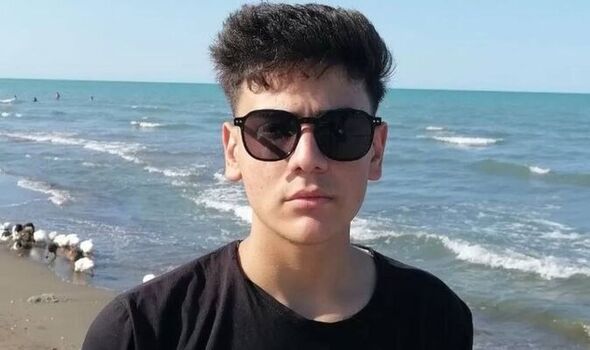 Sources who spoke to BBC Persian said the teenager was shot from less than one metre away. His death certificate said he died as a result of liver and kidney damage caused by birdshot. A video from the boy’s funeral showed his father pleading: “What crime had he committed, that you sprayed his stomach with 24 birdshot?”

Abolfazl’s parents had no idea what had happened to him after he took part in the protest.

The following day they were summoned to the police station to collect him – but when they arrived, they were told he was dead.

Abolfazl’s father was apparently warned not to talk to the media by police, but has broken his silence.

The family was put under pressure to say that their son was a member of the Basij, a volunteer militia that has been involved in the violent crackdown on protests.

Plain clothes security forces reportedly infiltrated the mourners at Abolfazl’s funeral and shushed those who tried to express their anger.

Abolfazl’s aunt held up a picture of him over his grave, but a female agent snatched the frame and put it under her veil, the BBC reported.

Some mourners were also stopped after the funeral and told to delete the videos from their phones.

Sources told the BBC he was “a happy teenager who loved making others smile”.

He had become frustrated with the corruption in the country, what had happened to Mahsa Amini and watching videos of Iranian women getting beaten up and killed in the streets.

A video of him posted on Twitter shows him playing with birthday balloons, laughing and dancing.

Abolfazl is one of 32 children and teenagers killed by security forces in the crackdown, according to figures from Iran’s Human Rights Activists News Agency (HRANA).

The agency estimates 244 protesters have been killed and more than 12,500 others have been detained, many of them young people and children.

Protests erupted in Iran after the death of 22-year-old Mahsa Amini in police custody after she was arrested for not wearing her hijab correctly.

They have since developed into the biggest challenge to Iran’s clerical leaders for years as protesters call for the downfall of Supreme Leader Ayatollah Ali Khamenei.