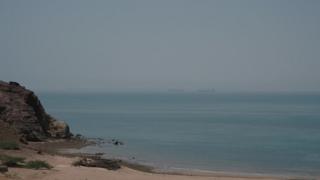 An Iranian navy “friendly fire” incident in which a ship was sunk has killed dozens of sailors, unofficial reports say.

Local journalists said the frigate Jamaran was testing a new anti-ship missile which locked onto and hit Konarak, a logistical ship.

It described the incident on Sunday near the Strait of Hormuz as a “crash”.

According to the unofficial reports, Jamaran – operated by Iran’s Revolutionary Guards Corps (IRGC) – fired the missile prematurely before Konarak had time to sail away from a floating target it had towed to a designated position.

In January, the IRGC mistakenly shot down a Ukrainian passenger plane near Tehran, killing all 176 people on board, at a time of heightened tension with the US.