Baghdad: The Iraqi military is training a former member of an Iran-backed militia, who is under US sanctions for killing protesters, to become a high-ranking officer in the army, according to six government, security and militia officials.

They said that Hussein Falih Aziz, known as Abu Zainab al-Lami, had been sent to Egypt with Iraqi officers for a year-long training normally reserved for the country's military personnel. 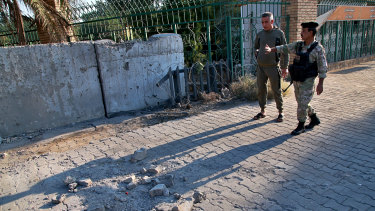 Security forces inspect the scene of the rocket attack at the gate of al-Zawra public park in Baghdad, Iraq.Credit:AP

A defence ministry document seen by Reuters showed his name, with the rank Major General, on a list of officers attending the training until next summer.

Making Lami a senior officer in the army is one of the boldest moves yet by Prime Minister Mustafa al-Kadhimi, a US ally, to dilute the power of Iran-backed militias in Iraq, the officials said, and aligns with Washington's stated desire to curtail Tehran's influence across the Middle East.

An Iraqi government spokesman and Iranian officials could not immediately be reached for comment.

A source close to Lami confirmed his deployment to Egypt for training.

Supporters of the plan see it as a way of weakening militias that boast tens of thousands of fighters and who hold considerable sway over Iraq's security and economy.

They say it will hasten the fracturing of some groups belonging to the Popular Mobilisation Forces (PMF), the state paramilitary umbrella organisation whose security branch Lami has directed for years.

The PMF did not immediately respond to a request for comment.

An Iraqi official, speaking on behalf of the government, declined to comment on Lami, but said there was a plan to restructure the PMF, including providing military training to its leaders. 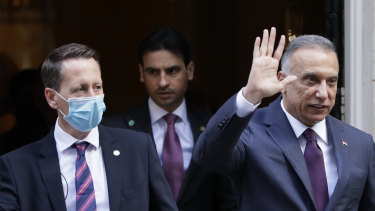 Trying to root out Iranian influence: Prime Minister of Iraq, Mustafa al-Kadhimi, right, waves to the media as he leaves Downing Street after a meeting with Britain’s Prime Minister Boris Johnson in London.Credit:AP

Some critics, however, call it a risky gambit that puts someone with a questionable human rights record and who has been close to Iran at the heart of the Iraqi military.

They see it as another sign the prime minister is giving concessions even to some of the most hardline, Iran-aligned officials to secure support for his government.

"The plan is to bring onside PMF leaders who are not seen as totally loyal to Iran and to ready them through this military training for positions inside the military and security apparatus," said a security official.

Lami is the head of security for Iraq's state paramilitary grouping and a one-time member of the Iran-backed Kataib Hezbollah militia. The source close to him denied he had any formal ties to Iran or the militias it supports.

He was put under US sanctions in 2019 for his alleged role, first reported by Reuters, in ordering the use of lethal force against anti-government protesters. Lami has since denied any role in the killing of peaceful demonstrators.

The tenure of Kadhimi, who took office in May, has been marked by a face-off between his government and parts of the armed forces on one side, and Iran-aligned militias on the other.

The US killing of Iranian military mastermind Qassem Soleimani and the Iraqi paramilitary chief Abu Mahdi al-Muhandis in a drone strike in Baghdad in January left the militias in disarray earlier this year.

Kadhimi has sided with the United States in efforts to weaken Iran-aligned Shi'ite Muslim groups that have grown to dominate Iraq's economy and state institutions since the US-led overthrow of Sunni dictator Saddam Hussein in 2003.

The US state department declined to comment for this article.

Kadhimi has made security sector reform a priority, focusing on a reshuffle of top state security posts.

Yet US and Iraqi officials say the militias continue to harass the 3,000 or so remaining US troops based in Iraq. Some lesser-known militia groups said they were behind rocket attacks on the US embassy in Baghdad.

An Iraqi security official said recruiting Lami into the army was part of an attempt by Kadhimi to bring the PMF closer to his government.