Footage has emerged from Fox News of Israel’s missile defence system Iron Dome in action as it intercepts multiple rockets fired at the country by Hamas, the terrorist organisation that runs the Gaza strip, following a day of attacks. The US-funded missile defence system is reported to intercept 90 percent of rockets fired by Hamas. Recent fighting has seen thousands of rockets fired from both sides as tensions boil over in the region after weeks of clashes between Palestinian’s and Israeli authorities following the expulsion of Palestinians from their homes in East Jerusalem.

The tensions culminated in violent clashes between worshipers and Israeli police at the Al-Aqsa Mosque and retaliatory rockets were launched by Hamas.

In the new footage, Fox News reporter Trey Yingst reports on the ground next to the Israeli’s Iron Dome missile defence system.

As he is speaking a rocket bursts out of its launch station as the reporter tells viewers about the systems’ capabilities.

The rocket shoots up to intercept a rocket fired by Hamas into southern Israel. 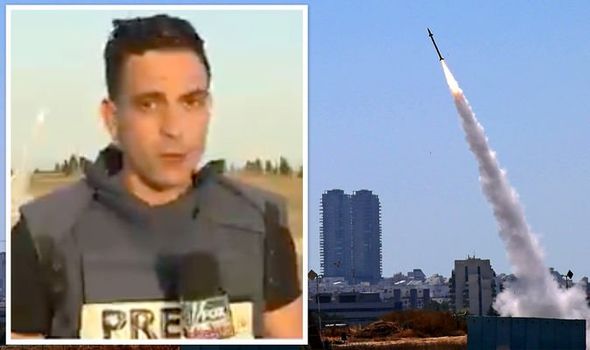 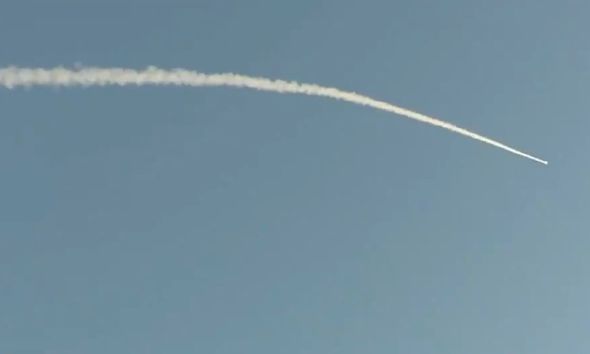 Then the missile then intercepts the Hamas rocket in a massive explosion.

He adds: “Interception. That is an example of what Israel has been dealing with all day.”

A loud boom follows the interception as it explodes into pieces above Israel.

Sunday Express’s Defence and Diplomatic editor Marco Giannangeli said the effectiveness of the Iron Dome had gone down to 80 percent amid the ongoing barrage of rockets aimed at it. 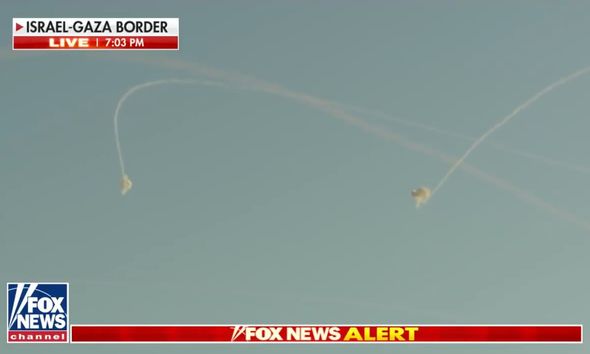 “Iron Dome isn’t perfect – 80 pc effectiveness right now due to number of Hamas missiles – but the death toll in Israel would be very different without it.”

It is believed Iron Dome intercepts around 90 percent of the rockets fired by Hamas, which now number in the thousands following recent days of attacks.

The footage comes as Israeli forces have destroyed entire tower blocks, killing and displacing Palestinian civilians in fighting over the last week. 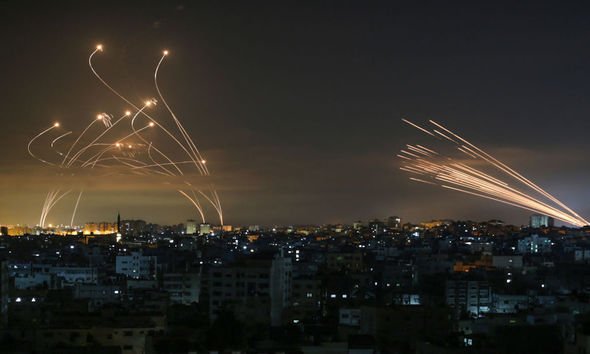 An Israeli airstrike in Gaza destroyed several homes on Sunday, killing 42 Palestinians, including 10 children, health officials said, as militants fired rockets at Israel with no end in sight to seven days of fighting. Many more children are amongst the dead on both sides as missile strikes hammer Gaza and parts of Israel.

One airstrike from Israel flattened a foreign media building in the Gaza strip which housed Al-Jazeera, the Associated Press and other media outlets.

While Hamas militants have retaliated by firing rockets back as the violence enters its second week.

The violence is the worst seen in the area since 2014, culminating after weeks of rising tensions following the forced expulsion of Palestinian families from the East Jerusalem neighbourhood of Sheikh Jarrah. The families have had numerous court cases filed against them by several pro-settler organisations since 1972.

They claim that land the families lived on was originally under Jewish ownership, but Palestinians see this as an extension of an official Israeli policy to displace as many Palestinians as possible from Jerusalem.

Confrontations between Palestinians, Israeli settlers and the Israeli police have been taking place since the end of April as Israeli courts gave May 2 as the eviction date for families .

The expulsions led to violent clashes between Palestinian’s celebrating Ramadan at the Al-Aqsa mosque in Jerusalem, a holy site revered by both Jews and Muslims, and the Israeli police which then boiled over into retaliatory rocket attacks fired by Hamas, who control Gaza, at Israel.