Every day under lockdown, Harry Hutchinson travels to his menswear shop in Berwick and stares at the walls.

"I’ve got nothing else to do," he says, summing up the past six months as "horrendous". 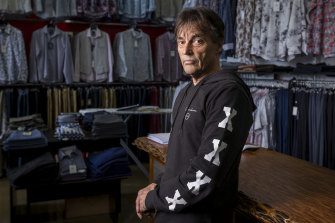 For the first time, he has seen a psychologist. And he says his shop, Harry’s Clothing, will have to close for good if the state government does not allow it to reopen before November.

Mr Hutchinson had anticipated reopening the store in Loveridge Walk, off High Street in the south-east Melbourne suburb, on October 19, under the state government's next major easing of COVID-19 restrictions.

He felt "terrible" when, on Sunday, Premier Daniel Andrews indicated metropolitan Melbourne would not be taking the large steps out of lockdown that might have been expected because opening up would create too great a risk of triggering a third wave of the pandemic.

Mr Hutchinson sells stock online and via click and collect, but it’s not much. Pre-pandemic, his income was about $15,000 a week, but it was now $1000 a week, he said.

He is surviving on JobKeeper and his savings, but is running out of reserves. He reckons if he is still closed by November, "I’ll just close the door, walk away from the debt".

"I’m 68 years of age and, unfortunately, I’ll go on the age pension. I’m old school, never been out of work in my life. Never had a government handout," he said.

"My mental state is not good, like a lot of people’s, and I’ve had to seek professional help."

Mr Hutchinson last week put up a poster in his window that was distributed by local state Liberal MP Brad Battin. The poster, with Mr Battin’s name on it, says: "It's time to open Victoria." 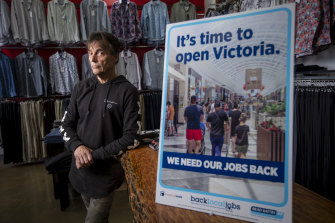 Mr Hutchinson with the poster calling on the state government to let businesses reopen.Credit:Wayne Taylor

Mr Hutchinson is a friend of Mr Battin, having employed the MP when he was a 15-year-old. But he says he is not a political party member and has voted both Labor and Liberal previously.

He just wants to reopen his shop – immediately. He said COVID-19 case numbers might not go down further this year and "we need to live with it".

He said there were only a handful of active cases in the Casey Council area, and current rules on who could open were unfair. A nearby cafe often had 15 people waiting to be served, and a newsagent sold socks, hats and T-shirts, yet Harry’s Clothing was closed.

She said the low case numbers that would trigger the next step in the road map out of lockdown, including retail reopenings, were unattainable.

"In all seriousness, I don’t know how long us small businesses can hang in there and just keep on hoping for these rays of sunshine that we’re waiting for and aren’t forthcoming," she said.

Rob Imperatore, owner of Shanikas Italian restaurants in Berwick and Pakenham, said the shutdown "can’t go on for too much longer, surely" and that business was on hold over a small percentage of the population affected by the coronavirus.

He called for restaurants to at least be allowed to open indoors with limited numbers, because outdoor dining was at the mercy of the weather and could be expensive to set up.

Get our Coronavirus Update newsletter for the day’s crucial developments and the numbers you need to know. Sign up to The Sydney Morning Herald’s newsletter here and The Age’s here.