A further five cases were linked to the Avalon cluster and one to a medical transport worker grouping. The final case, from western Sydney, remains under investigation. 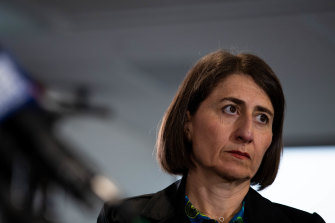 On Thursday Victoria announced that masks would be mandatory for residents entering indoor public venues from 5pm today and recommended they be worn when visiting family or friends. A number of experts have criticised the NSW government's refusal to make mask wearing compulsory on public transport and indoor venues during the crisis.

Ms Berejiklian said NSW was trying to "strike the right balance" in relation to mask wearing and other protective measures, adding she was reluctant to place more burdens on Sydney residents than what was needed.

However, the Premier said stronger safety measures were being considered for the third cricket Test at the SCG.

"We are very much keen to work with the SCG, to make sure the COVID safety plans are robust but also if the situation evolves and we're more concerned about community transmission, then we will take the appropriate [steps], " Ms Berejiklian said. "So I think it's really clear that this is an evolving situation and we will update our advice accordingly."

Ms Berejiklian repeated her warnings that Sydneysiders should stay home this New Year's Eve, and asked for more residents, even with the mildest of symptoms, to get tested. There were 27,894 tests reported to 8pm on Wednesday.

Chief Health Officer Dr Kerry Chant said the Sydney outbreak was "a bit of a roller coaster ride". She drew the distinction between positive cases who are close contacts compared with mystery cases where the source is unknown such as the Croydon cluster.

"The sooner we can find any missed cases in the community, the quicker we can close down those chains of transmission," she said.

"We're seeing transmission occurring in close contacts of people who were infected in the original seeding events. And so over the last few days, a number of the cases have been those close contacts.

Anyone who visited any of the following venues at the listed times is considered a close contact who must get tested immediately and isolate for 14 days regardless of the result.

Meanwhile, South Australia will reinstate its hard border with NSW, but Premier Steven Marshall said Victorians would still be able to come and go from the state unfettered – for now.

Victoria has recorded a further three local cases of COVID-19 on top of the three cases announced last night.

Gatherings in homes in Melbourne for New Year's Eve will be restricted to 15 people, down from 30, and masks will again be mandatory indoors.

Acting Victorian Premier Jacinta Allan said that if you were planning a New Year's Eve party, "you will need to reduce your numbers".

"From 5pm tonight masks will be mandatory indoors. If you are planning to leave your home at the moment, we ask people to carry their masks with them, we are now asking them to wear a mask if they are indoors in any location which is not their private home," she said.