Jealous ex-boyfriend, 29, is found guilty of brutally murdering young mother, 33, in a jealous rage after launching savage attack in front of her three-year-old son

A former trainee jockey who was likened to ‘a ticking time bomb’ in court faces being jailed for life for the sadistic murder of his ex-girlfriend.

Charles Jessop, 29, attacked Clare Nash, 33, in a ‘vicious and cowardly’ attack on her doorstep in Newmarket, Suffolk, in front of her three-year-old son after lying in wait for her to return home.

A judge at Ipswich Crown Court heard how the terrified youngster, yelled: ‘It’s Charlie, he’s got a knife, and he’s going to chop my mum’s head off’.

Miss Nash ended up being dragged in to her downstairs toilet by knife-wielding Jessop after she told him: ‘Not in front of the child.’

She was then stabbed multiple times before Jessop’s knife broke and he continued his attack by strangling her behind the closed door.

Jurors heard a harrowing 999 call made by her housemate Peter Claringbold who had been looking after her son. 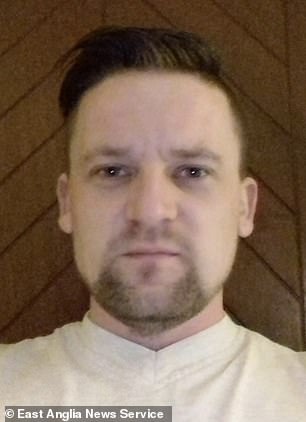 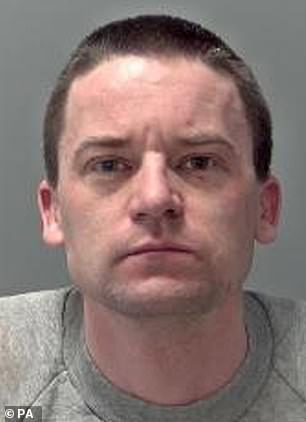 Charles Jessop (pictured), 29, attacked Clare Nash, 33, in a ‘vicious and cowardly’ attack on her doorstep in Newmarket, Suffolk, in front of her three-year-old son after lying in wait for her to return home

Mr Claringbold held his phone up to the toilet door so call handlers could hear Jessop scream, ‘You are going to die’ as he stabbed Miss Nash at her home.

Jessop of Newmarket had denied murder, but was found guilty on Wednesday after an eight-week trial. He was remanded in custody to be sentenced on July 16.

Jurors heard how he was enraged when she refused to go back to him and started a relationship with another man.

Jessop was arrested at the mother-of-two’s home within minutes of the attack as she lay dying on January 16 last year. He repeatedly told officers: ‘I have won’.

The court was told how he shouted out in a pub two days earlier: ‘I am going to slit her throat because if I can’t have her, no-one will. I will go to prison and do time for it.’

He bombarded her with ‘relentless’ calls and messages before her death, sending her 95 texts on Christmas Day in 2019 and another 174 over the next four days, threatening to kill himself if he did not see her.

She called police three times in the six weeks before her death to report that he was threatening her, but she declined to make a statement against him.

A police constable gave her safety advice on the morning of January 16 and assessed that she was at ‘medium risk’ of domestic violence, said prosecutor Mark Cotter.

Jessop was said to have cycled to her home with a kitchen knife later in the day and lay in wait for her.

Mr Cotter described Jessop in the trial as an ‘unbelievably dangerous’ man with previous convictions for violence against women.

He added: ‘This defendant has been a ticking time bomb for years and years. It was simply a question of which unfortunate soul was going to be in the way when he exploded.’

Mr Cotter said Miss Nash had cried out she was pregnant during the attack ‘in a desperate attempt to make him stop’.

But he added: ‘He mocked her for this, imitating her plea for mercy, as he was arrested.’ 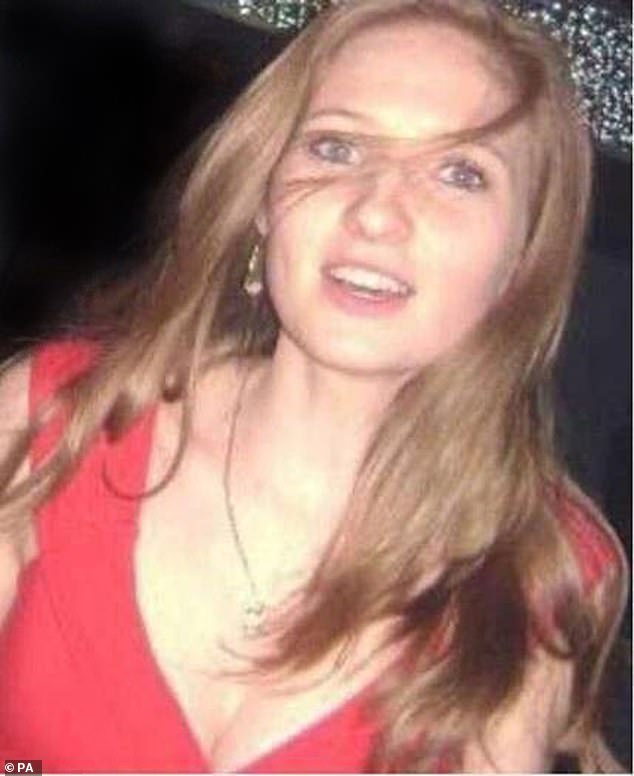 Miss Nash’s housemate Peter Claringbold held his phone up to the toilet door so call handlers could hear Jessop scream, ‘You are going to die’ as he stabbed Miss Nash (pictured)

A post mortem revealed that she had not been pregnant, but was unable to conclude whether she died of blood loss or strangulation.

When interviewed the following day by police, Jessop claimed he suffered from anxiety and thought he might be schizophrenic.

Describing how he got angry, he said: ‘Sometimes the only way I can deal with that is letting my anger out.’

But Jessop was later seen by a psychiatrist who stated that he there was no evidence of him having schizophrenia.

It was concluded instead he had a form of personality disorder which did not ‘explain the killing’, said Mr Cotter.

In a later interview, he alleged Miss Nash ‘played a lot of mind games’. When asked by police to explain his actions, he replied: ‘Good, done, No comment.’

Jessop pleaded guilty to manslaughter due to diminished responsibility midway through his trial.

He tried to claim his behaviour might have been altered by him having repeatedly snorted prescribed anti-depressants.

Jessop said he felt like he was in a video game similar to Grand Theft Auto on the day of the killing with ‘a lifeline and stars’ flashing in his mind, symbolising how much life he had left and how ‘wanted’ he was by police.

But Mr Cotter said Jessop had ‘simply become enraged by Clare Nash’s determined rejection of his unwanted advances and further angered by her new relationship’.

He added: ‘That anger fuelled by jealousy drove him to kill Clare Nash in a vicious, pre-meditated and cowardly attack in her home.’

The court heard how Jessop and Miss Nash started seeing each other in the second half of 2019, but the relationship began to break down in the December and she started a new relationship with bar manager George Petrie in the New Year.

Mr Cotter said there was evidence of Jessop behaving ‘in an obsessive and controlling way’ over several months.

He said Miss Nash called police on December 4, 2019 and told an officer who attended that Jessop had slapped her in the face, but she did not want to a make a complaint.

She called police again a week later on December 11 during an argument with him in Soham, Cambridgeshire, but her phone battery run out.

The court heard how Miss Nash then ran into an Indian restaurant, saying: ‘He’s going to kill me. Call the police.’

She rang police for a third time on January 14, 2020, to say she had received repeated threatening calls from him.

Officers were unable to see her immediately due to ‘resourcing issues’, but she was given safety advice over the phone and she said the calls had stopped.

An officer tried to see her the next day, leaving a voicemail message and a note at her address when she was not at home.

She was then spoken to on the morning of January 16, but did not wish to pursue a complaint, said Mr Cotter.

Senior Investigating Officer Detective Inspector Matthew Connick of Suffolk Police said: ‘This was a vicious, pre-meditated and unprovoked attack on Clare Nash by Charles Jessop so it is satisfying to see the jury found him guilty of this horrific act.

‘While justice has been secured for Clare’s family the investigation team are acutely aware that this will not bring Clare back to them and the pain of her death still remains.

‘Our thoughts are with the family at this time and I would like to thank them for their support during the investigation and trial’.

Miss Nash’s father Brian Nash said: ‘While nothing will return Clare to us, the emotional burden has been lessened knowing justice has been served. She was deeply, deeply loved and will be missed by her family and friends.

A spokesperson for the Independent Office for Police Conduct said: ‘We decided to independently investigate as there had been contact between Suffolk Constabulary police officers and Clare Nash in the days before her death.