Jealous mother jailed for running over a pregnant love rival

Jealous mother, 20, is jailed for three years for running over a pregnant love rival after learning she was expecting a baby with her partner

A jealous mother has been jailed for three years for running over a love rival after learning she was expecting a baby with her partner.

Glass had given birth two months before the incident and Ms Dunlavy was 36 weeks pregnant at the time, with both children sharing the same father, known as Jayden, Isleworth Crown Court heard.

A day before the incident, the two women had exchanged aggressive text messages in which Glass threatened to kill Ms Dunlavy, the court heard.

David Markham, prosecuting, told the court Glass then ‘deliberately drove her vehicle’ at Ms Dunlavy while her ‘own child was in the vehicle in an unsecure baby seat’.

Glass pleaded guilty to cruelty to a child, dangerous driving, malicious communication and grievous bodily harm with intent, and was sentenced to three years in a young offenders institution and banned from driving for 30 months. 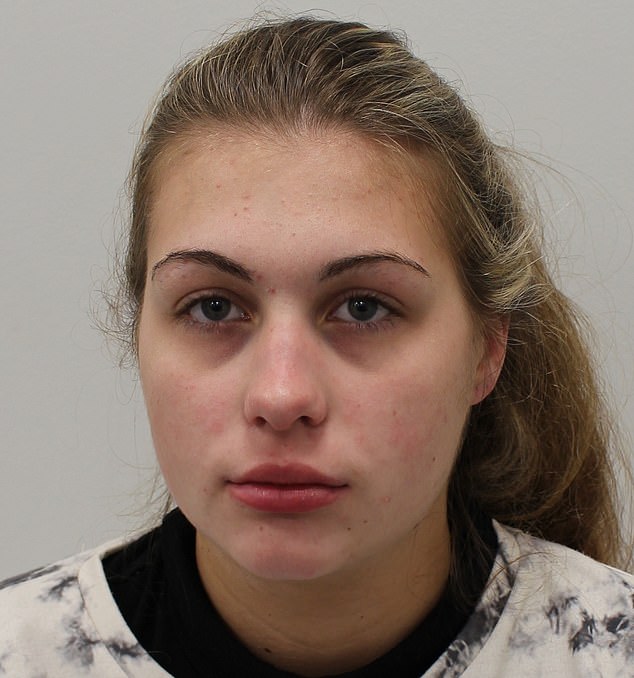 Jealous mother Alexis Glass, 20, mounted the pavement in her car and crushed her love rival Chantay Dunlavy against a wall on Summerwood Road, Isleworth, west London, on September 10 last year

Mr Markham said it was clear that tension ‘simmered between the two women before the attack’ in September.

In the messages, which were read to the court, Glass said she would be happy if Ms Dunlavy’s baby died during labour.

In response, Ms Dunlavy wrote: ‘You’re pushing your luck. You don’t know who I am, Jayden can give you numerous occasions where I’ve thumped a bitch’s face.

‘Last time I saw you you ran. Instead of being a full grown adult you are being a pathetic little child. No one wants him, you can have him.’

In a follow up message, Glass said: ‘Your baby is going to grow up knowing it should have been aborted. Luckily I drive, I will just run you over.’

The next day, Ms Dunlavy went with her mother to the property where Glass was living to ‘resolve matters peacefully’, Mr Markham said.

When Glass arrived, Ms Dunlavy’s mother got out of the car to speak to her, leaving her daughter alone in the vehicle.

She told the defendant she had seen the messages and that it had to stop as they were both in the same situation with Jayden.

As Ms Dunlavy left the car to join her mother, she and Glass began shouting at each other, prompting the mother to leave the scene with her daughter.

Glass got into her car and said: ‘You’ve come to my house, I’m going to kill you. This is self defence’, the court was told.

Ms Dunlavy and her mother moved to an area behind some bollards as Glass sped at them and slammed the brakes, the court heard.

CCTV footage showed Glass driving towards them, mounting the pavement and pinning Ms Dunlavy against a wall.

Her mother jumped on the bonnet while shouting at the defendant before Glass reversed her car and drove off.

In a victim impact statement read in court by Mr Markham, Ms Dunlavy said she felt ‘overwhelmed with sadness and fear about losing her baby’.

Mr Markham said: ‘The attack ruined the remaining weeks of her pregnancy and replaced it with fear. She was unable to give birth in the way she had planned.

‘It was extremely traumatic for her.’

Ms Dunlavy said: ‘Since the attack I have suffered with extreme panic attacks, depression, feelings of fear.

‘I avoid social situations and even avoid going to the shop.’

She also said she struggles to walk more than a few metres without having to stop and is still suffering from swelling and pain nearly six months later.

Mr Markham said she ‘expresses concern that there may be another attack’ from Glass. 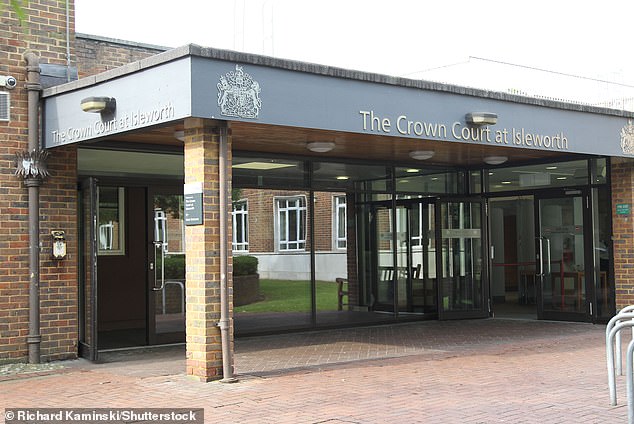 Glass pleaded guilty to cruelty to a child, dangerous driving, malicious communication and grievous bodily harm with intent, and at Isleworth Crown Court (pictured) she was sentenced to three years in a young offenders institution and banned from driving for 30 months

Appearing by video link from HMP Bronzefield, Glass left the video room while Mr Markham read the facts of the case but she returned to listen to her representative, Jose Olivares-Chandler.

‘I have had numerous conferences with Miss Glass and during those she has appreciated the impact on Chantay and her family’, Mr Olivares-Chandler said.

‘This was an impulsive, isolated and out of character incident. This defendant wants nothing more to do with the victim and her family.’

Judge Alistair Hammerton said: ‘The defendant’s actions were aggressive and impulsive and she appeared to be acting from raw emotions, anger and jealousy, because her boyfriend was having a baby with someone else.

‘She used her car as a weapon and targeted someone who was pregnant and therefore vulnerable.

‘I accept that she was suffering from postnatal depression at the time and I have also read references describing her as a loving mother who worked for the elderly.’

Glass’ son is now in foster care, the court heard, and Judge Hammerton said it is unlikely Glass will be given primary care of him when she is released.

She received three years detention in a young offenders institute and is banned from driving for 30 months.

Glass was also given a restraining order preventing her from contacting Ms Dunlavy or her mother for five years.