JK Rowling has called for an end to the ‘climate of fear’ around the trans debate after being sent ‘heart-breaking’ letters from women who had irreversible gender reassignment surgery.

The Harry Potter author, 55, said she ‘had a huge postbag’ with hundreds of letters following her comments over the summer, adding that 90 per cent of them were in support of her stance.

She told Good Housekeeping magazine: ‘Many women are concerned about the challenges to their fundamental rights posed by certain aspects of gender identity ideology.’ 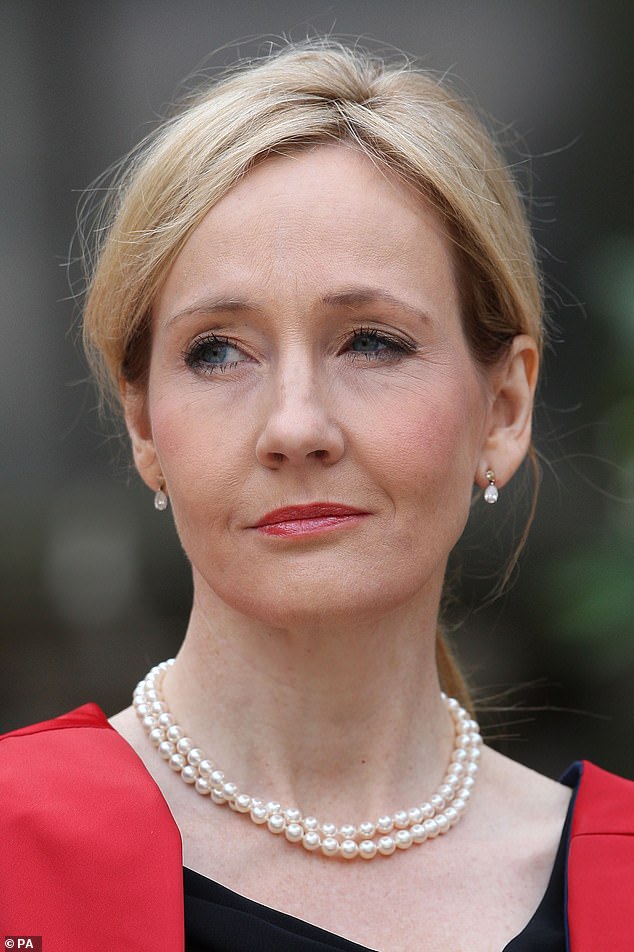 JK Rowling (pictured), 55, said she ‘had a huge postbag’ with hundreds of letters following her comments over the summer, adding that 90 per cent of them were in support of her stance

It comes after Keira Bell, 23, brought legal action against the Tavistock and Portman NHS Trust, which runs the UK’s only gender identity development service for children, for putting her on puberty blockers at the age of 16.

Ms Rowling today called for ‘a more nuanced conversation’ about the ‘huge increase’ in the number of girls and young women seeking to transition.

She added: ‘I’ve had a huge postbag since speaking up on this issue and more than 90 per cent of the letters and emails have been supportive.

‘My correspondence have included medical staff, social workers, prison workers, workers in women’s refuges and members of the LGBT community, including trans people.’

She said people were ‘afraid to speak up’ and called for a ‘more nuanced conversation’ around women’s rights.

A hashtag calling for Ms Rowling’s death was number one trending on Twitter in October. 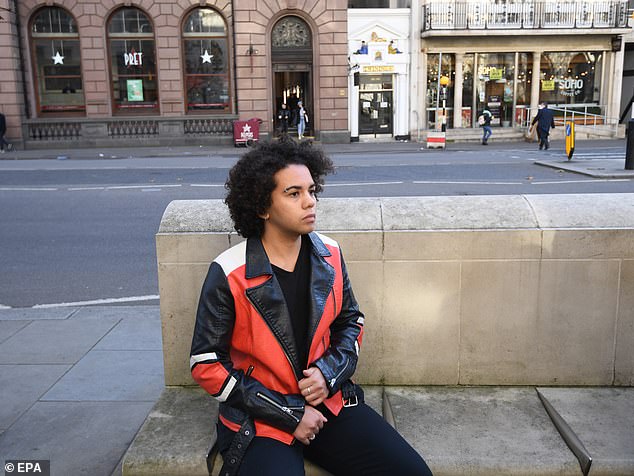 It comes after Keira Bell (pictured), 23, brought legal action against the Tavistock and Portman NHS Trust, which runs the UK’s only gender identity development service for children, for putting her on puberty blockers at the age of 16

‘Many are afraid to speak up because they fear for their jobs and even for their personal safety. This climate of fear serves nobody well, least of all trans people,’ she said.

‘I believe everybody should be free to live a life that is authentic to them, and that they should be safe to do so.

‘I also believe that we need a more nuanced conversation around women’s rights and around the huge increase in numbers of girls and young women who are seeking to transition.

‘Some of the most heartbreaking letters I’ve received have been from young women, who regret the irreversible surgeries they’ve undertaken. These stories need to be told.’

In June, Rowling sparked controversy when she questioned the use of the phrase ‘people who menstruate’ instead of the word ‘woman’ and went on to insist that the concept of sex is real.

Reacting to an article, she tweeted to her 14.5m followers: ‘I’m sure there used to be a word for those people. Someone help me out. Wumben? Wimpund? Woomud?’

Her stance led to a massive backlash with criticism coming from fans and Harry Potter stars including Daniel Radcliffe, Emma Watson, Rupert Grint, and Eddie Redmayne. 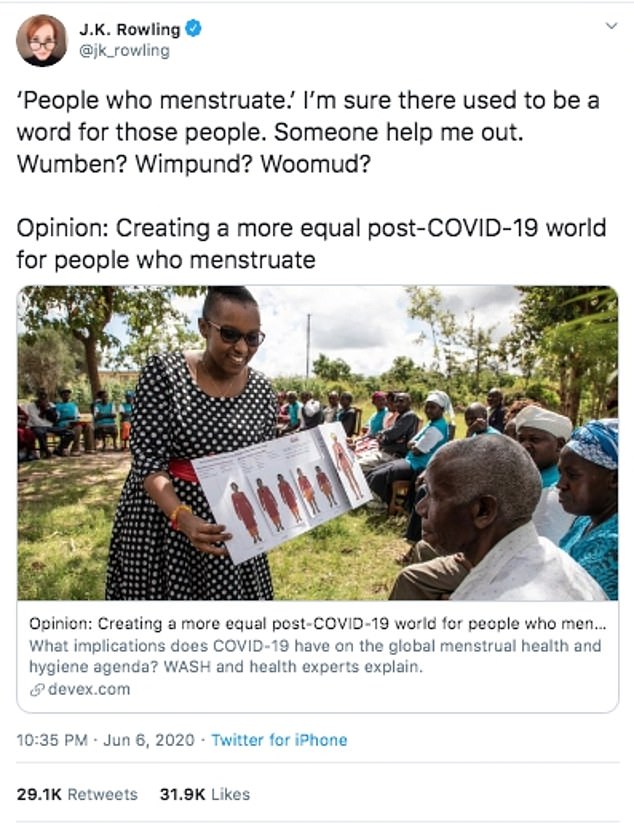 In June, Rowling sparked controversy when she questioned the use of the phrase ‘people who menstruate’ instead of the word ‘woman’ and went on to insist that the concept of sex is real 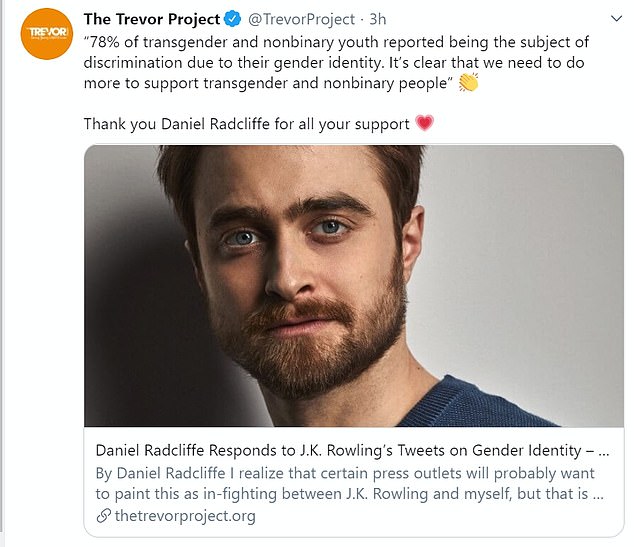 Her remarks led to a backlash from stars including Daniel Radcliffe, who played Harry Potter in the film franchise of the series, and Eddie Redmayne, who stars in Rowling’s Fantastic Beasts films

She later posted a 3,663 word essay on her personal website revealing she was sexually assaulted in her 20s.

It told of the domestic violence she suffered in her first marriage to Portuguese journalism student Jorge Arantas, which she described as ‘violent’.

She has since revealed she has received enormous support for voicing her beliefs.

Her comments follow a ruling last week in the High Court that children under the age of 16 are unlikely to be able to give informed consent to undergo treatment with puberty-blocking drugs.

Ms Bell claimed she was treated like a ‘guinea pig’, and said doctors failed to carry out a proper psychiatric assessment and should have challenged her more over her decision to transition to a male as a teenager.

The judges said in their ruling: ‘It is highly unlikely that a child aged 13 or under would be competent to give consent to the administration of puberty blockers.

‘It is doubtful that a child aged 14 or 15 could understand and weigh the long-term risks and consequences of the administration of puberty blockers.’

Speaking outside the Royal Courts of Justice on December 1, Ms Bell said she was ‘delighted’ with the High Court’s ruling.

She said: ‘This judgment is not political, it’s about protecting vulnerable children. I’m delighted to see that common sense has prevailed.’

Though she is now in the process of transitioning back to a woman, she faces further legal hurdles because by law she is now a man, and may be infertile.

Her lawyers had argued that children going through puberty cannot properly consent to taking puberty blockers. 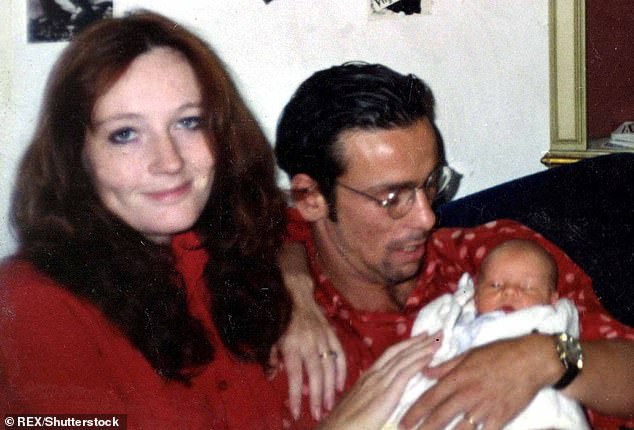 She said she was a ‘domestic abuse and sexual assault survivor’ and was in a ‘violent’ first marriage to Portuguese journalism student Jorge Arantes. Pictured: The former couple with their daughter Jessica, who is now 26

They said there was ‘a very high likelihood’ that children who start taking hormone blockers will later begin taking cross-sex hormones, which they say cause ‘irreversible changes’.

The Tavistock and Portman NHS Trust had argued that taking puberty blockers and later cross-sex hormones were entirely separate stages of treatment.

The trust argued that medical specialists in this field should be able to make calls based on their assessments and claimed it was ‘a radical proposal’ to suggest children did not have the capacity to give consent.

But judges ruled that both treatments were, ‘two stages of one clinical pathway and once on that pathway it is extremely rare for a child to get off it’. 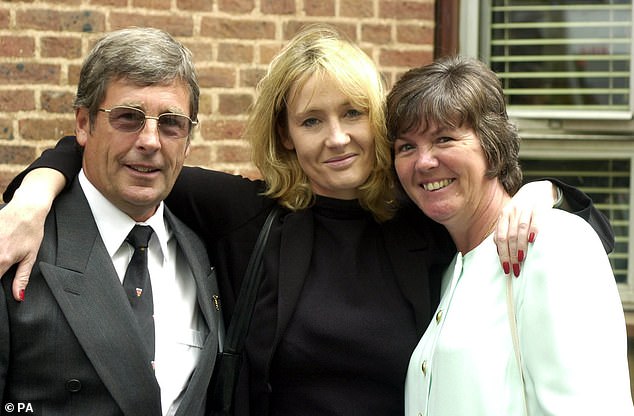 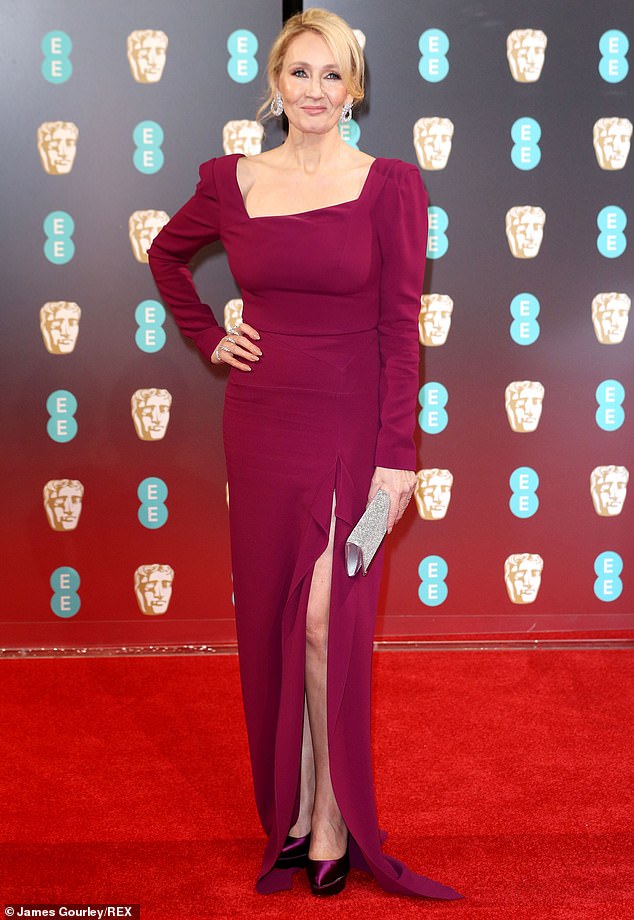 This means doctors may now seek approval or support from the court before prescribing puberty-blocking drugs to children, to try and avoid liability.

Rowling has found herself at the forefront of the trans debate and has been targeted by trans campaigners who called for her to be ‘cancelled’ after she spoke out over the summer.

‘I know and love trans people, but erasing the concept of sex removes the ability of many to meaningfully discuss their lives. It isn’t hate to speak the truth.

‘The idea that women like me, who’ve been empathetic to trans people for decades, feeling kinship because they’re vulnerable in the same way as women – i.e., to male violence – ‘hate’ trans people because they think sex is real and has lived consequences – is a nonsense.’

She continued: ‘I respect every trans person’s right to live any way that feels authentic and comfortable to them. I’d march with you if you were discriminated against on the basis of being trans.

‘At the same time, my life has been shaped by being female. I do not believe it’s hateful to say so.’

Ms Rowling was subjected to bitter attacks from transgender activists following the publication of her latest novel, Troubled Blood.

The novel is published under Rowling’s pseudonym Robert Galbraith and features a ‘transvestite serial killer’, which sparked furious backlash online a day before the book’s release on September 15.

A collection of over 50 actors, writers, playwrights, journalists joined together to pen a letter in response to ‘hate speech’ directed against Rowling.

It was was triggered in response to the hashtag #RIPJKRowling trending at number one on Twitter and said Rowling was a victim of ‘an insidious, authoritarian and misogynistic trend in social media’.

The letter wrote the hashtag declaring her dead on social media was ‘just the latest example of hate speech directed against her’.

WE STAND WITH JK AGAINST HATE

JK Rowling has been subjected to an onslaught of abuse that highlights an insidious, authoritarian and misogynistic trend in social media.

Rowling has consistently shown herself to be an honourable and compassionate person, and the appalling hashtag #RIPJKRowling is just the latest example of hate speech directed against her and other women that Twitter and other platforms enable and implicitly endorse.

We are signing this letter in the hope that, if more people stand up against the targeting of women online, we might at least make it less acceptable to engage in it or profit from it.

We wish JK Rowling well and stand in solidarity with her.

a, calls, end, for, JK, Rowling, to
Celebrities