Just Stop Oil sparked rush hour chaos again this morning after an activist scaled the motorway gantry on the M25.

Police have been called to deal with protester, who is in place between junctions 6 and 7 in Surrey. Traffic is still moving at the moment.

It came despite National Highways getting a High Court order barring the eco-zealots from disrupting Britain’s busiest motorway.

Police have proactively made a series of arrests amid the demonstrators’ plans for large-scale blockades.

Last night, leader Roger Hallam, 56, and two other eco-activists were taken in for questioning, according to The Sun – while the Met confirmed this morning it made a further four arrests at an address in south London for conspiracy to cause public nuisance.

Mr Hallam was not at home when the police raided his property to arrest him, but they later said he had been arrested on suspicion of the same offence.

The eco-group carried out an entire month of action over October and were planning daily action until Christmas. 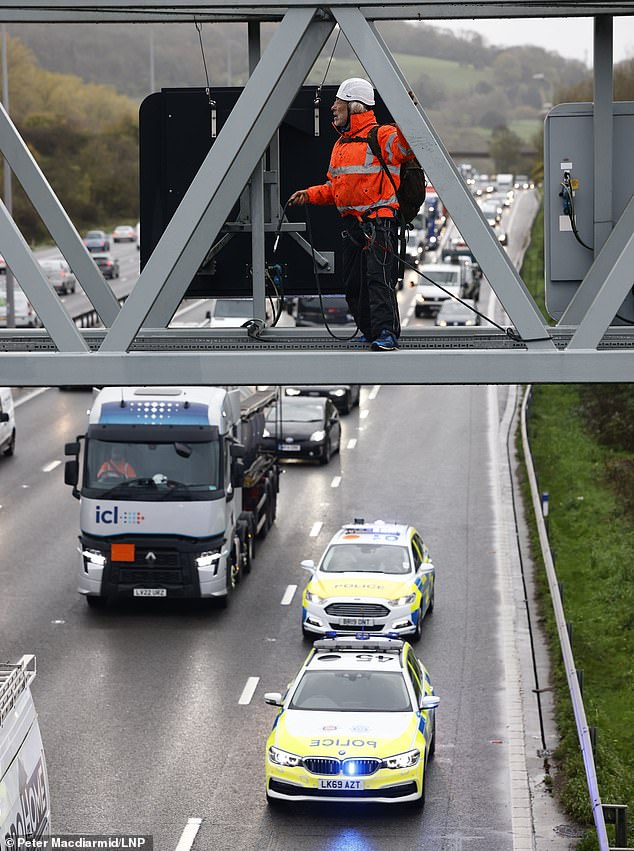 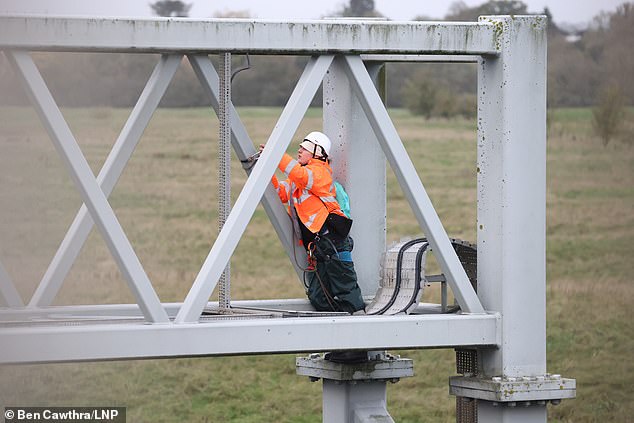 Police have been called to deal with protester, who is in place between junctions 6 and 7 in Surrey. Traffic is still moving at the moment 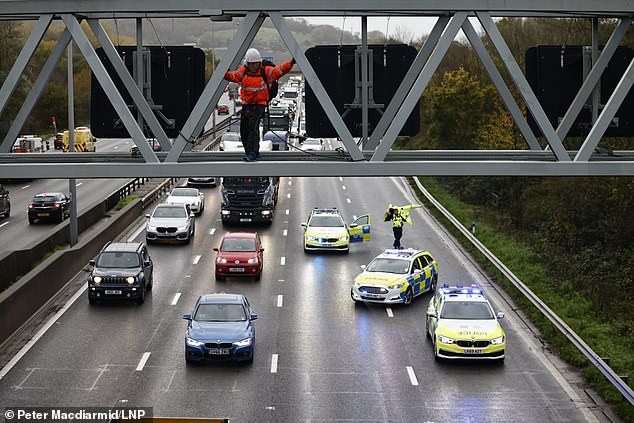 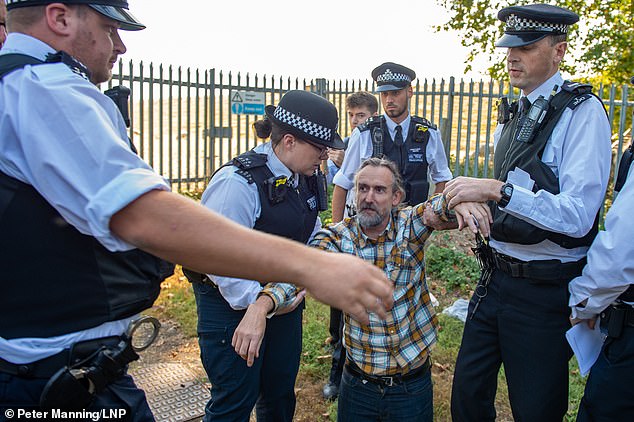 The leader of Just Stop Oil, Roger Hallam, was arrested last night for reportedly planning large-scale blockades to bring traffic to a stand-still on the M25 (pictured: Hallam being arrested in 2019) 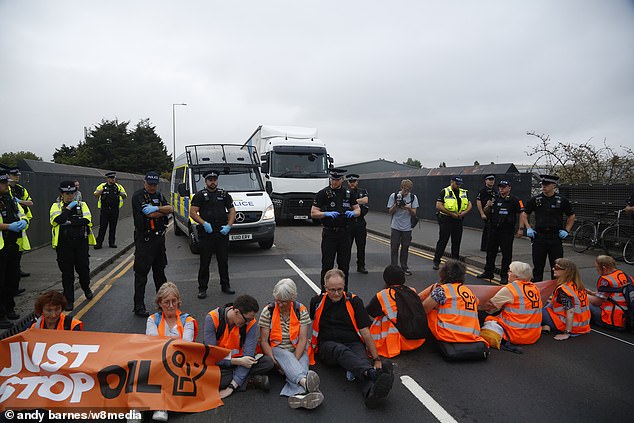 Hallam,56, and two other eco-activists were taken in for questioning by Met police last night, The Sun reported

Farmer Roger Hallam, 55, who helped found Extinction Rebellion, before leaving to joining protest organiser Insulate Britain, wants to ‘bring down all the regimes in the world’, starting with Britain, and believes those running society ‘should have a bullet through their heads’.

There have been allegations of a ‘cult-like’ following for the Welshman who compares his tactics to those of heroic activists Gandhi and Martin Luther King. He is said to have been inspired to take up climate activism after his farm in Wales went bust due to bad weather.

Ironically, Mr Hallam owns a farmhouse which was described as ‘poorly insulated’ in an official energy performance certificate. His 2,000 sq ft farmhouse in Carmarthen, South Wales, was given the lowest possible energy rating on the certificate. It is unclear if Mr Hallam has taken steps to improve the rating since it was issued six years ago.

Asked about the certificate, a spokesman for the group said: ‘This is the point – UK homes are the leakiest in Europe, with many millions of families being unable to afford the advice and help needed to insulate the building they live in.’

Hallam has also compared the murder of six million Jewish people at the hands of the Nazis to other historical massacres and claimed that memory of the Holocaust was holding Germany back.

The former organic farmer was quickly condemned by Extinction Rebellion groups in Germany after his comments with a newspaper in the country.

Metropolitan Police confirmed they have launched a ‘significant’ operation to identify and arrest climate change protesters suspected of planning ‘reckless and serious’ motorway disruption as Cop27 gets underway.

Mr Twist said: ‘Our investigation has strong reason to suspect the Just Stop Oil group intend to disrupt major motorway road networks which would risk serious harm to the public, with reckless action to obstruct the public on a large scale.

‘All those arrested are suspected of engaging in conspiracy to cause public nuisance contrary to Section 78 Police, Crime, Sentencing and Courts Act 2022.

‘There remains a possibility outstanding suspects are still intent on causing unlawful disruption to the public. The Met has mobilised specialist teams and drawn police officers from across the capital to respond.’

According to the Met, which is conducting the operation in conjunction with the National Police Coordination Centre (NPoCC), more than 10,000 officer shifts have been dedicated to policing Just Stop Oil protests since the start of October.

The court has granted a further injunction which aims to stop unlawful demonstrations on the M25, which encircles Greater London, in an attempt to end disruption to the busy road by the environmental group.

It means that anyone entering the motorway and fixing themselves to any object or structure on it, and anyone assisting in such an act, can be held in contempt of court.

They could face imprisonment, an unlimited fine, and the seizure of assets.

The injunction was secured in addition to an court order obtained by National Highways earlier this year that targeted protesters including those from Insulate Britain.

Transport Secretary Mark Harper said he instructed National Highways to apply for the latest injunction to tackle a ‘reckless minority of protesters’.

He said: ‘Protesting by blocking busy motorways or climbing overhead structures is extremely dangerous and disruptive, which is why I instructed National Highways to apply for this further injunction, which the courts have granted.

‘This will make it easier to take action against this reckless minority of protesters.

‘They could face imprisonment or an unlimited fine if they breach the injunction.’ 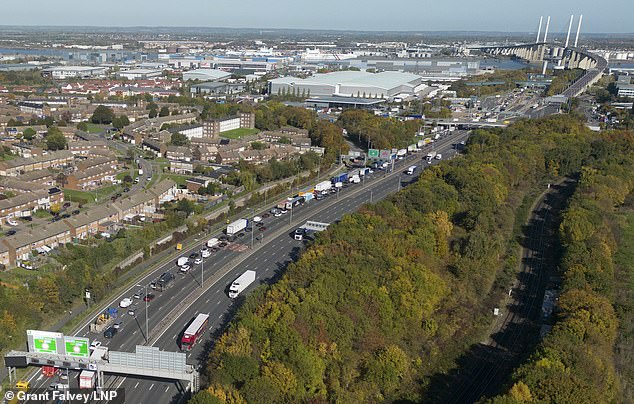 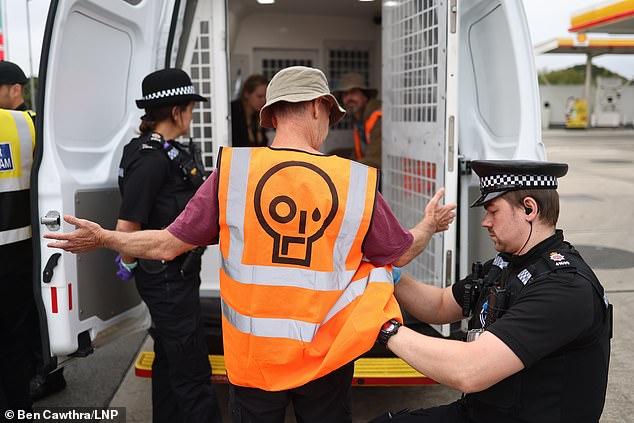 Mr Hallam, who also co-founded Extinction Rebellion said their action up until Christmas would potentially be ‘the most significant act of civil disobedience in decades’

Duncan Smith, executive director for operations at National Highways, added: ‘Millions of people rely on the strategic road network every day and they have a right to expect it to operate as it should.

‘We already have an injunction covering hundreds of miles of our network. This further court order will make it easier to take action against those reckless individuals who choose to unlawfully protest on the M25.

‘Protesting on these busy roads is extremely dangerous for the protestors themselves and all road users.

‘National Highways remains committed to do whatever it can to seek to deter unlawful protest activity and punish all of those who breach the injunction orders in the eyes of the law.’

National Highways’ existing injunction covers the M25, the M25 feeder roads and major roads in Kent and around the Port of Dover until May 2023.