Keir Starmer’s ratings have plunged to the same low as Jeremy Corbyn as Tories gloat that Labour is being destroyed by ‘woke wars’.

Satisfaction with Sir Keir’s performance has tumbled to minus 29 – on a par with the figure recorded by his left-wing predecessor after 14 months in charge of the party.

Nearly half of Labour supports think he is doing a bad job, and crucially for the Red Wall he is seen as far less patriotic than Boris Johnson.

The grim findings in the long-running Ipsos MORI tracker poll emerged as ministers waded into the row over the suspension of England cricketer Ollie Robinson over racist and sexist tweets from when he was a teenager – while MPs criticised England footballers taking the knee.

One senior Conservative told MailOnline that Labour was ‘losing the plot’ and lecturing voters on ‘woke’ issues, while ministers were ‘agreeing with the public saying this is ridiculous’. ‘It is all playing into the government’s hands,’ the MP said.

Confidence is also growing in Tory circles about the prospects of winning the Batley & Spen by-election next month – in what could be a make-or-break test for Sir Keir. 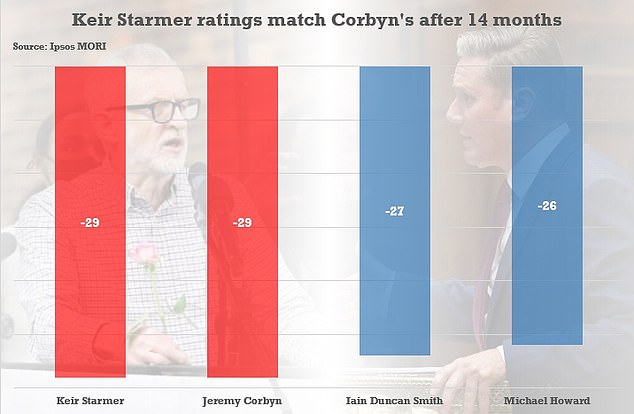 According to the Ipsos MORI poll in the Evening Standard, just 22 per cent of the public are satisfied with Sir Keir’s performance, down 14 points since April.

Some 51 per cent were dissatisfied with him, up five points. The net rating of minus 29 is in line with Mr Corbyn’s 14 months into his calamitous leadership.

It is also comparable to the scores turned in by Tories Iain Duncan Smith and Michael Howard as they stewarded their parties to dire election defeats.

Just 24 per cent think Sir Keir has ‘what it takes to be a good Prime Minister’.

That will set alarm bells ringing at Labour HQ as it is 13 points behind Manchester Mayor Andy Burnham, who has hinted that he wants to take over as leader.

One senior Tory MP for a northern constituency told MailOnline: ‘The Labour Party is losing the plot. They can carry on banging on about all this stuff. The reality is most of the public are not with them on it. We are just agreeing with the public saying this is ridiculous.

‘People will just keep voting for us because we are not having any truck with it.’

Asked about the case of England cricketer Robinson, who has been suspended from playing while tweets are investigated, the MP said: ‘I was livid about that. Where have we got to that eight years after a teenager said something we are going to damage their career. They are not politicians, they are sportsmen.

‘Are we going to start saying to people you have got to act like a responsible adult from the moment you are five years old? We are going to ruin people’s lives.’

The MP said the issue with England footballers taking the knee was ‘ridiculous’.

‘If they want to stand in solidarity then they could all link hands around a circle. But it is a political gesture they are taking. I would never take the knee,’ they said. 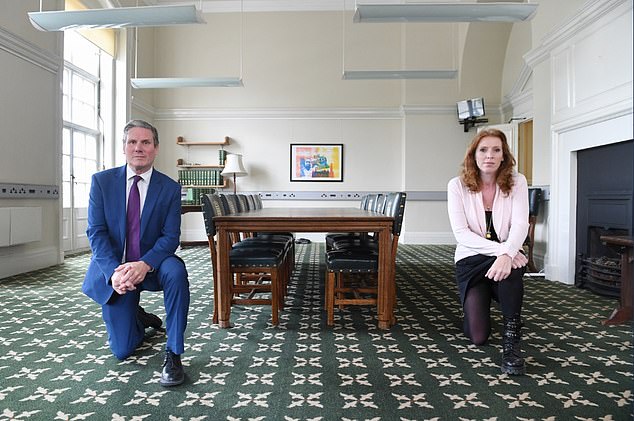 Tories say Keir Starmer is ‘losing the plot’ by backing ‘woke’ causes that are not supported by the public. Pictured, the Labour leader taking the knee with deputy Angela Rayner

‘It is linked to extremism. It is linked to a violent Marxist organisation that has hijacked the agenda and the Left after backing it, and most of the country are not.

‘Rather than listening to the public they are arguing with the public saying you should be worried about this stuff. The public are like, ‘no I don’t have to be. I will do what I want.”

The MP claimed that ‘if the football grounds were full the boos would be louder than the claps’ when teams took the knee.

‘The message of what is was about has just gone now, it’s disappeared. It’s just become tribe war,’ they said.

‘All the government is really saying is you are going mad, you just need to take a step back.’