North Korea is pushing for the end of sanctions on imports of luxury goods including Kim Jong Un’s favourite fine liquors, according to South Korean lawmakers.

The move is said to be an indication that Kim Jong Un and his elite are being hit hard by the sanctions, as a South Korean politician said the luxury goods would be ‘distributed to Pyongyang’s elite’.

It comes amid speculation about the North Korean dictator’s health, after he was spotted last month with a dark spot on the back of his head.

Park Jie-won, head of the South Korea’s National Intelligence Service (NIS), said in a briefing to lawmakers that North Korea had proposed a relaxation on sanctions. 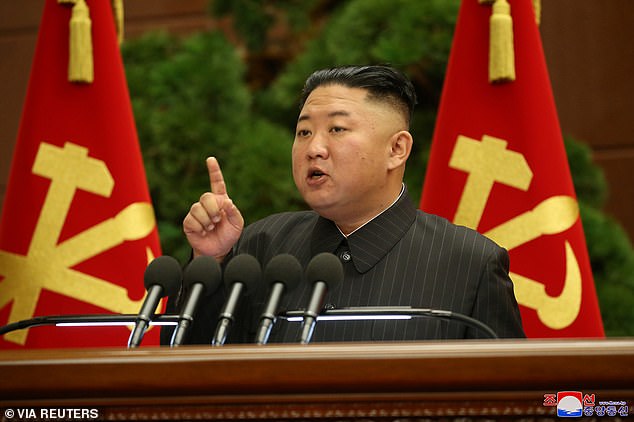 North Korea reportedly wants sanctions on imports of luxury goods, including Kim Jong Un’s (pictured) favourite liquors, lifted before it restarts denuclearisation talks with the US

The politician said that North Korea want sanctions to be eased on luxury goods, including high-class liquors and designer suits, ‘not just for Kim Jong Un’s own consumption’.

‘As a precondition to reopen talks, North Korea argues that the United States should allow mineral exports and imports of refined oil and necessities,’ Ha Tae-keung, a member of the parliamentary intelligence committee, told reporters, citing Park.

‘I asked which necessities they want the most, and they said high-class liquors and suits were included, not just for Kim Jong Un’s own consumption but to distribute to Pyongyang’s elite,’ he added.

North Korea’s state-run media made no mention on Tuesday of any new request for the lifting sanctions to restart talks.

Washington has given no indication of a willingness to ease sanctions ahead of any talks. Secretary of State Antony Blinken planned to call on Southeast Asian counterparts in a virtual meeting this week to fully implement sanctions on North Korea, department spokesman Ned Price said on Monday.

North Korea’s state-run media made no mention on Tuesday of any new request for the lifting sanctions to restart talks. Pictured: Kim Jong Un on July 30

Price reiterated on Tuesday that the United States was willing to meet North Korea ‘anytime, anywhere, without preconditions,’ but there had been no response.

Another State Department spokesperson added: ‘In the meantime, in the absence of any type of engagements, United Nations sanctions on (North Korea) remain in place and we will continue to enforce them along with the international community.’

The United Nations has imposed a wide range of sanctions on North Korea over its development of nuclear weapons and ballistic missiles. The United States and others have also imposed their own sanctions.

North Korea has not tested a nuclear weapon or an intercontinental ballistic missile since 2017 and a historic meeting between Kim Jong Un and former U.S. President Donald Trump in 2018 raised hopes for a diplomatic breakthrough.

Trump had two subsequent meetings with Kim but made no progress in getting North Korea to give up its nuclear and missile programmes in exchange for sanctions relief.

Kim Byung-kee, another South Korean legislator, said North Korea appeared to have ‘harboured discontent’ with Washington for not offering concessions for the test freeze.

‘The United States should be able to bring them back to dialogue by readjusting some sanctions,’ Kim said, citing Park.

Kim Jong Un’s sister, Kim Yo Jong warned South Korea on Sunday that its joint exercises with the United States, which North Korea sees as preparations for an invasion, would undermine a thaw between the two Koreas. 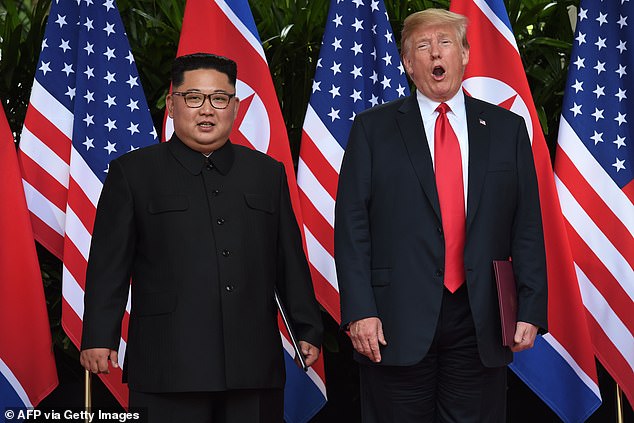 Kim Byung-kee quoted Park as saying there was ‘a need to consider responding flexibly to South Korea-U.S. military exercises’.

Ha Tae-keung said Kim Jong Un and South Korean President Moon Jae-in had expressed a willingness to rebuild trust and improve ties since April and Kim had asked to reconnect the hotlines.

The lawmakers said North Korea needed of some 1 million tonnes of rice, even after releasing reserves saved in case of war, as its economy had been battered by the coronavirus and bad weather.

‘They’re running out of the reserves and banking on some 400,000 tonnes of summer crops including barley and potatoes they’ve just harvested,’ Kim Byung-kee said.

It comes after Kim Jong Un has been seen with a dark spot on the back of his head, sometimes covered by a bandage, fuelling more speculation about his health.

The North Korean tyrant’s dark patch was first seen at the end of July when he attended a series of events including a military parade and meeting with veterans.

The apparent wound, with a greenish hue, was variously seen uncovered or covered by a broad nude-coloured plaster. 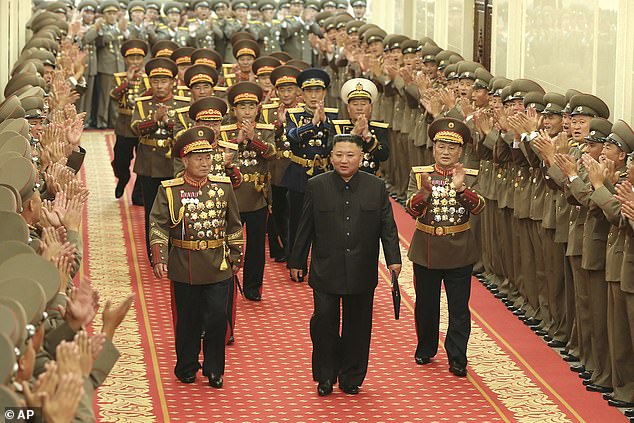 The news comes amid speculation about the North Korean dictator’s (pictured) health, after he was spotted last month with a dark spot on the back of his head

There has been rampant speculation about the 37-year-old’s health since he lost a considerable amount of weight earlier this year, with his Mao-style suit hanging loose over his shoulders and his facial features conspicuously defined.

State media made the highly unusual decision in June to describe Kim as ’emaciated’ and ‘breaking our people’s hearts,’ in an apparent effort to evoke sympathy for the despot who has admitted publicly to a ‘great crisis’ brought about by the pandemic.

It is believed that he developed the mark on his head some time after July 11 because on that date he was seen at an appearance with musicians with no trace of it, according to North Korean monitoring site NK Daily.

It is not the first time Kim has appeared publicly with a curious mark on his body.

In May last year, he was seen with a small dark spot on his wrist from what medical experts claimed was the result of a needle used in heart surgery.

Kim’s health has been the subject of international speculation for years as his death would raise questions over succession and stability in the nuclear-armed nation.