London: Semyon Rozenfeld first escaped death in the gas chambers by inventing a trade for himself when he arrived at Sobibor, a Nazi death camp in occupied Poland, in the fall of 1943. Questioned by a German officer, he said he was a glazier and was taken aside for work detail.

About a month later he was among about 600 prisoners who staged a historic uprising against their captors and tried to escape. Only about 300 made it to the fences, and most of the rest were recaptured in the surrounding countryside. But some managed to make it to freedom, Rozenfeld among them. 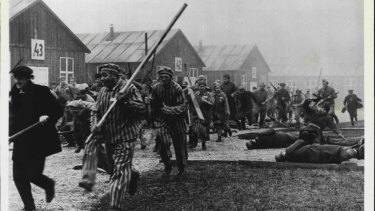 Joining forces with Russian prisoners, the inmates of Sobibor prison stage a successful breakout, seen here in a frame from a TV series.Credit:Channel 7/File

He died at 96 on Monday at a hospital in Rehovot, Israel, near Tel Aviv, and was believed to be the last known survivor of Sobibor. The Jewish Agency for Israel confirmed his death.

He was cited as the last survivor after the death of Selma Wynberg Engel last December in East Haven, Connecticut, also at 96. She had been one of the first to tell the world of the camp's existence.

Rozenfeld was born in 1922 in Ukraine, the son of a tailor. He was drafted by the Red Army before falling prisoner to the Germans and was held first in Minsk, in today's Belarus, and later in Sobibor.

The camp in Sobibor began operating in the spring of 1942 as part of Operation Reinhard, the Nazi plan to exterminate Polish Jews. Only a small minority of detainees were allowed to work, mostly in operating the camp, including the disposal of bodies. Most people were killed in gas chambers shortly after their arrival. At least 167,000 people and possibly as many as 350,000 were murdered there.

Rozenfeld was part of a group of prisoners who planned an escape in October 1943. They were to kill as many guards as they could with knives and axes before storming the main gate. They vowed to tell the world what had happened at Sobibor.

On October 14, the revolt was set in motion. Hundreds of prisoners didn't make it out of the camp, but 300 or so did, under fire, and then only to face minefields.

Rozenfeld climbed a 2.7-metre fence and kept running despite a bullet wound to his leg. "I was not afraid," he said, "because I didn't have time to think about fear. I only thought about life."

Those who escaped and made it through the minefields went into hiding in the surrounding forest, and some sought help from local residents. Many prisoners were captured by Nazi guards and Polish collaborators. The camp was closed soon after the revolt. Fewer than 60 escapees survived the war. 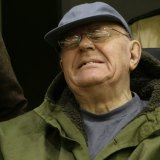 The last of the guards to be tried for killing Jews at Sobibor was John Demjanjuk, a former autoworker in Ohio, US. In 2011, in a German court, he was found guilty of taking part in the murder of 28,000 people and sentenced to five years in prison. He died in a nursing home in 2012 while appealing the conviction.

As the Red Army arrived in the city of Chelm, where Rozenfeld had taken refuge, Rozenfeld again joined their ranks and fought to liberate Berlin. He returned to Ukraine, married and lived there until moving to Israel in 1990.

He was most recently living in a nursing home in Yad Binyamin, south of Tel Aviv. He is survived by two sons, Michael and Roman; four grandchildren; and one great-grandchild.