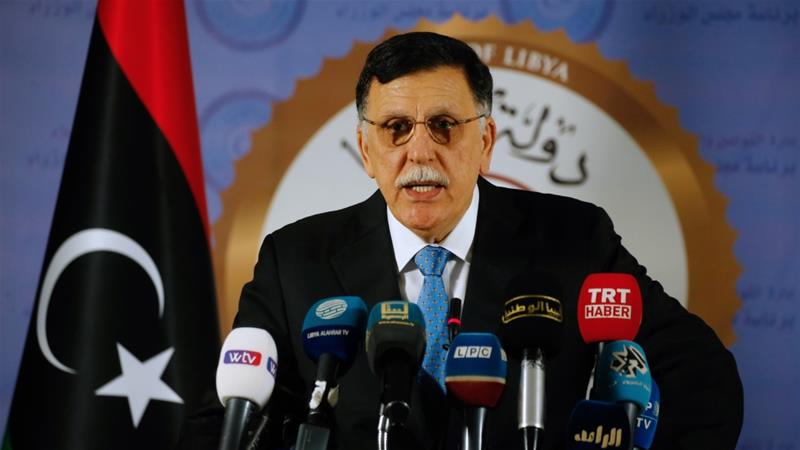 The head of Libya’s UN-recognised government has proposed holding nationwide elections to end the war in the North African country, as the forces of the rival military commander Khalifa Haftar continue their two-month-long battle to take the capital, Tripoli.

Speaking at a news conference on Sunday, Prime Minister Fayez al-Sarraj said he was proposing a “Libyan congress” aimed at finding a peaceful solution to the conflict.

The talks would draw up a roadmap for parliamentary and presidential elections to be held before the end of 2019, he said in Tripoli, the seat of his administration.

“I present today a political initiative for a way out of crisis. First, an all-inclusive Libyan congress to be convened, with the coordination of the international players … whereby we pave the way for building the state on the rule of law and democracy,” he said.

“Second, during this congress an agreement will be reached on a future roadmap, where the constitutional foundation will be laid [for] presidential and legislative elections before the end of 2019.”

Sarraj’s Government of National Accord (GNA) holds the west, while Haftar’s self-styled Libyan National Army (LNA) holds the east and much of the south of the country.

Haftar has presented himself as a strong hand who can restore stability in Libya, but his opponents view him as an aspiring autocrat and fear a return to one-man rule.

Sarraj did not say whether Haftar or his representatives would be included in his proposed talks.

All Libyans who “call for a peaceful and democratic solution” would take part and  there would be “no place for those who seek tyranny and dictatorship,” he said, while calling on the United Nation to support the forum and to oversee elections.

The two sides last held talks in the United Arab Emirates in February.

There are fears that Haftar’s offensive on Tripoli could ignite a civil war on the scale of the violence after the 2011 uprising that toppled and killed longtime ruler, Muammar Gaddafi. The LNA launched the campaign in early April, but counter-attacks by forces loyal to the GNA have resulted in a stalemate on the city’s southern outskirts.

The UN mission to Libya in a brief statement welcomed Sarraj’s initiative, describing it as “constructive proposal to advance the political process towards ending Libya’s long state of conflict”.

A spokesman for Haftar’s did not immediately answer phone calls and messages seeking comment.

Emad Badi, non-resident scholar at the Middle East Institute, said Sarraj’s initiative was unlikely to have a political or military impact.

“There needs to be some sort of a domestic buy-in from the eastern side. Haftar is the sole interlocuter in the East. Without another interlocuter, this deal is non-implementable,” he said, adding that the proposal may be a bid by Sarraj to show “good will and that he’s open to negotiations and power-sharing.”

The battle for Tripoli has killed over 650 people, including combatants and civilians, according the World Health Organization. More than 94,000 have been displaced by the fighting.

Sarraj also demanded an international probe into alleged “war crimes and crimes against humanity,” since Haftar launched his offensive.

The two camps have so far refused to negotiate a ceasefire.