Met Office forecasters have issued wet weather warnings across much of the UK, with lightning, thunderstorms and torrential rain set to arrive today. Three yellow warnings for storms and rain are already in place in England, Scotland, Wales and Northern Ireland on Monday, and 80mm of rain could fall in some areas. And another severe warning for thunder and lighting is in place for tomorrow, Tuesday, June 25, before temperatures soar towards the mid-30s.

What causes thunder and lightning?

On Monday we are getting three weather warnings across the UK

Thunderstorms occur when the atmosphere is unstable, meaning when rising warm air exists beneath much colder air.

When there is sufficient instability in the air, the updraft of warm air is rapid and the water vapour will swiftly form a cumulonimbus cloud. 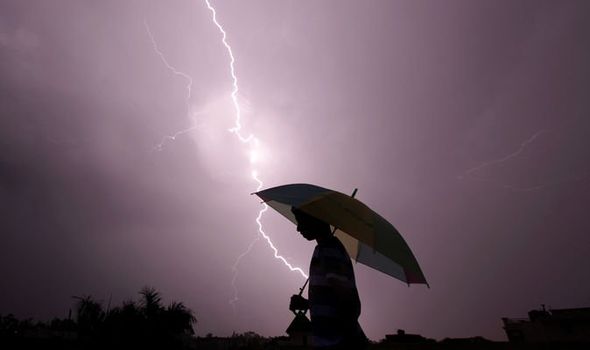 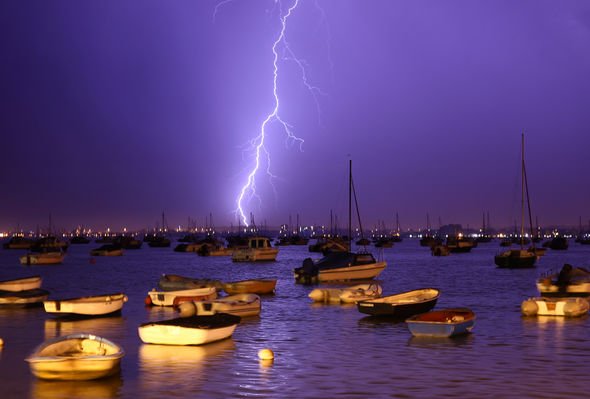 As a consequence of circulating air, water freezes on the surface of the droplet.

And eventually these droplets become too heavy to be supported by the up-draughts of air and they fall as hail.

When this hail travels within the cloud, it collects a negative charge when it rubs against smaller positively charged ice crystals.

A negative charge forms at the cloud’s bottom where the hail collects, while the lighter ice crystals remain near the top of the cloud and create a positive charge.

A negative charge is attracted to the Earth’s surface and when the attraction becomes too strong, the positive and negative charges discharge, to balance the difference in a flash of lightning.

The incredibly fast expansion and heating of air caused by this lightning produces the accompanying thunder clap.

Lightning is estimated to strike somewhere on Earth’s surface 44 times every second, meaning there is annually around 1.4 billion lightning strikes.

By Friday, the mercury could peak at about 33C, meaning Glastonbury festival-goers are expected to experience some of the hottest temperatures in the UK.

It comes amid a heatwave that has been forecast across the continent, potentially bringing record temperatures of 40C to Europe. 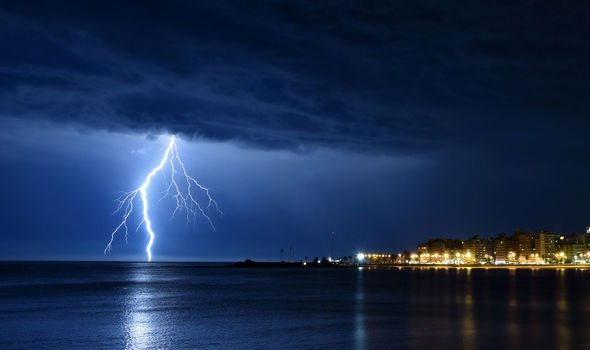 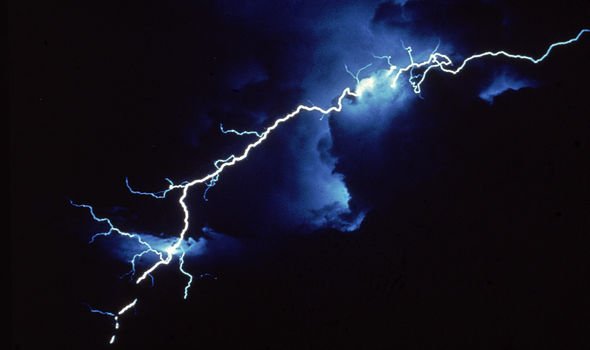 Met Office meteorologist Simon Partridge said: “On Monday we are getting three weather warnings across the UK. Two run from midnight to midnight.

“The first is a rain warning in eastern Scotland. 20 to 40mm of rain is expected to fall quite widely and some isolated places could see up to 80mm.

“The second warning is a thunderstorm warning for the majority of England and Wales. 20mm of rain is expected to fall widely with 60mm possible in isolated spots.

“A final thunder storm warning is in place for Northern Ireland.”