Locked up and tortured, Myanmar protesters have emerged defiant

Singapore: Thiha’s night at a military air base in Myeik, on Myanmar’s south coast, is one he won’t soon forget.

“They forced us to strip, bow our heads and knee down before them, then asked us to act as we are protesting. They then hit us with batons and kicked us on the body and face,” the 29-year-old said of his hosts at the facility last month. 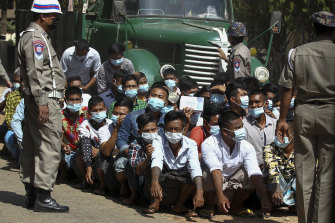 Security forces in Myanmar stand guard over detainees in February.Credit:AP

“No food and no water but humiliation and torture the whole night.”

Giving his nickname rather than his full name for safety reasons, Thiha was let out the next day, his release accompanied with a warning.

“They threatened us not to join the protest again, and said they would not hesitate to kill our family members if we did again,” he told The Sydney Morning Herald and The Age.

Despite that harrowing experience, Thiha is one of the lucky ones. 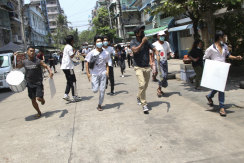 At least 564 people have been killed in the military’s savage bid to crush the pro-democracy movement opposing its February 1 coup. It has been a campaign marked by its depravity, claiming the lives of no less than 47 children and forcing thousands to seek refuge across borders into Thailand and India.

According to the Assistance Association for Political Prisoners advocacy group, 2667 others remain locked up, many in locations unknown to their families, among them politicians, election officials and journalists as well as protesters.

While Suu Kyi is under house arrest and and Turnell has at least been allowed to speak to his wife in Sydney on the phone, hundreds of others have been “forcibly disappeared”, says Human Rights Watch, which has interviewed family members and lawyers of people who have vanished in the nine weeks since the military takeover. 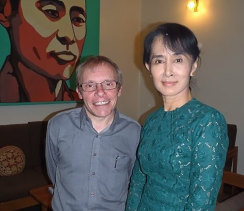 There have been multiple deaths in custody, activist organisations say, the most notable that of Khin Maung Latt, an official with the elected National League for Democracy Party whose body was returned to his family last month bearing the signs of torture.

The Herald and The Age spoke to several people who had been detained since the coup.

Among them was Thit Myat Zaw, a freelance journalist from Yangon’s North Dagon township, who said he was beaten continuously for 10 minutes by police and soldiers after being hit by a rubber bullet and detained during a protest in Myanmar’s biggest city on March 10. Another of the fortunate ones, he was wearing a construction helmet when he was violently set upon but his family did not know where he was during the two days he was imprisoned with about 200 others at a military training school.

“They didn’t even know whether or I was arrested or killed,” he said. 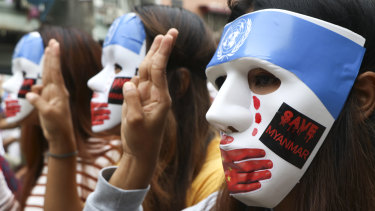 Thit Myat Zaw, who had been livestreaming the protest on Facebook when he was taken away by security forces, said military doctors had provided treatment to wounded protesters there but he refused the offer.

He described the military officials who interrogated him as “stupid and careless”.

“I am 32, but I lied to them that I am a university student and was just watching the protest. They believed it and released me.”

Prisoners and their families have also outsmarted the junta in other ways.

Phyo Aung, 27, was held for three weeks last month at the infamous Insein prison, a colonial relic built in the 19th century in a distinctive circular shape surround a central guard tower.

“The officials do not allow letters to be taken in and out of the prison. My wife therefore used double-tape to hide letters under the clothes she brought for me,” he said.

Phyo Aung said soldiers had behaved “like animals” when he and his two cousins were among about 200 protesters arrested on March 3 in Hlaing township in Yangon.

“They threatened us at gun point, beat us and kicked us. I was kicked three or four times as well as got beaten by batons. But I was lucky not to get hurt so badly,” he said. 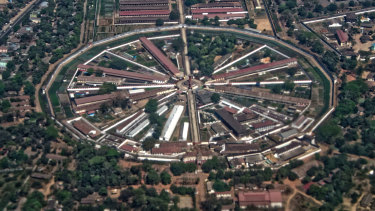 Sharing a cell with about 80 other detainees at Insein, he said prisoners were given three meals a day and allowed to play the traditional Burmese sport of chinlone, or caneball, during the three hours they were permitted in the yard each day.

“Officials in Insein prison are relatively good compared to the reports of detainees being tortured in other prisons. They told us they have nothing to do with us nor have no hate nor personal feeling to us. Their duty was to keep us inside the prison,” he said.

Before he was one of hundreds released from Insein on March 24, however, he said a military official from the State Administration Council, which the junta has called itself, told them not to be involved in any demonstrations against the regime again.

“They told us they would not tolerate and have mercy on us next time,” he said.

The next day, he was back out on the streets protesting.

“I moved my family to a safe place in a rural area so that I can move freely,” Phyo Aung said.

“We are winning. They want to control or administrate the country but no one listens to or obeys them. That’s why they are killing people in hope of amplifying the fear among people.

“They might assume people are afraid of being shot, killed or detained but we are more afraid of letting them ruin our lives and our future.”

As for Turnell, Assistance Association for Political Prisoners has endeavoured to find out where he is being held without success.

“I am very close to him and feel very sorry for him,” said AAPP co-founder Bo Kyi, a former prisoner of the junta himself who has known the Australian academic since 2003.

“At first we got information that he was taken to Insein prison but when we inquired to the prison no one could confirm. Maybe he is detained at a military guesthouse or at another military detention facility.”