Lost Caravaggio is sold to anonymous buyer for secret amount

A painting thought to be a ‘lost masterpiece’ by Italian painter Caravaggio has been bought two days before it was due to go under the hammer in France.

‘Judith and Holofernes’ was found under an old mattress in the attic of a house in Toulouse, France, and was due to be sold at an auction house in the region on Thursday.

However the piece was snapped up by a foreign buyer today, who is believed to have purchased the painting for a major museum.

Art expert Eric Turquin – who authenticated the painting – said it was worth between 100 and 150 million euros (£89.5 million to £134.3 million), although several Italian specialists have doubts about the canvas. 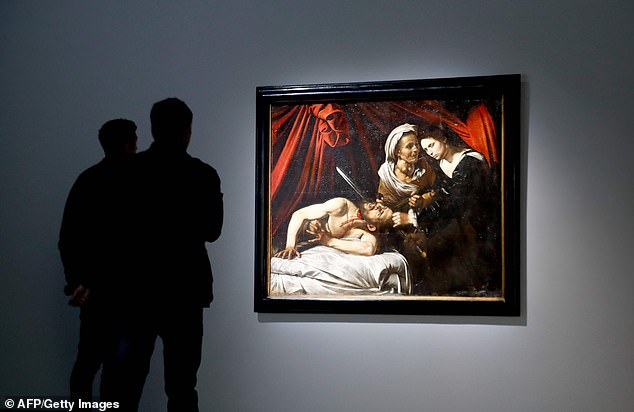 But Mr Turquin, France’s leading authority on Old Masters paintings, had staked his reputation on the work being the fiery artist’s lost ‘Judith and Holofernes’.

The painting depicting a grisly biblical scene of the beautiful Jewish widow Judith beheading a sleeping Assyrian general was to be auctioned in Toulouse on Thursday.

But before bidding could start a foreign buyer ‘close to a major museum’ stepped in, said Marc Labarbe, the local auctioneer who discovered the painting when he was asked to value some ‘old things in the attic’ five years ago.

‘The fact that the offer comes from a collector close to a major museum convinced the seller to accept (the offer),’ he said. 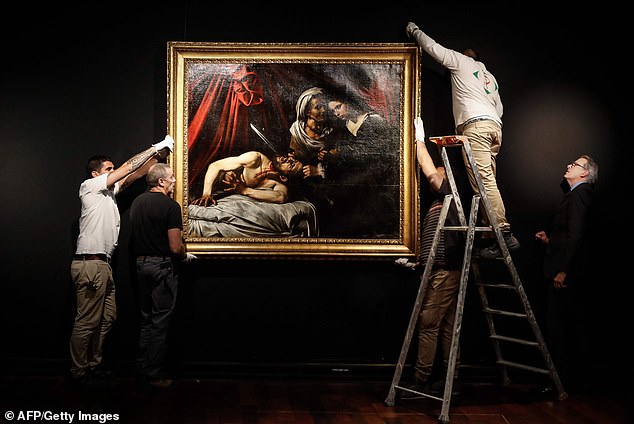 Five technicians work on the hanging of the Caravaggio painting for its public presentation at the Drouot auction house in Paris, before it was due to go under the hammer in Toulouse 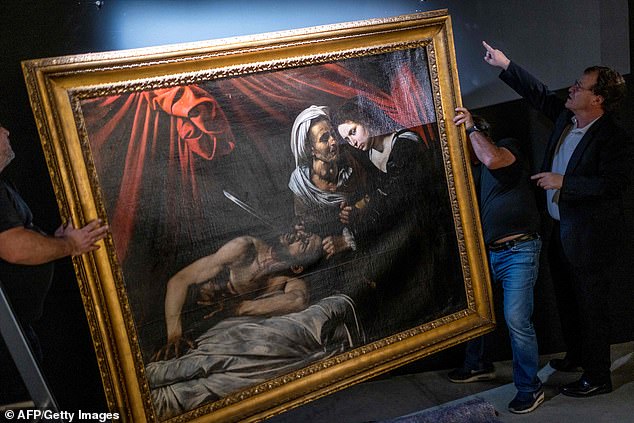 Mr Labarbe said he could not reveal the name of the buyer or the price paid because of a confidentiality agreement.

But he confirmed that the painting – dated to 1606 – will leave France after an export bar, which classed the canvass as a ‘national treasure’, was not renewed in November.

Mr Turquin had earlier told AFP that he was sure the painting was by the volatile and violent genius, who created it while he was on the run from a death sentence for murder.

‘Not only is it a Caravaggio, but of all the Caravaggios that are known today, this is one of the great pictures,’ he insisted. 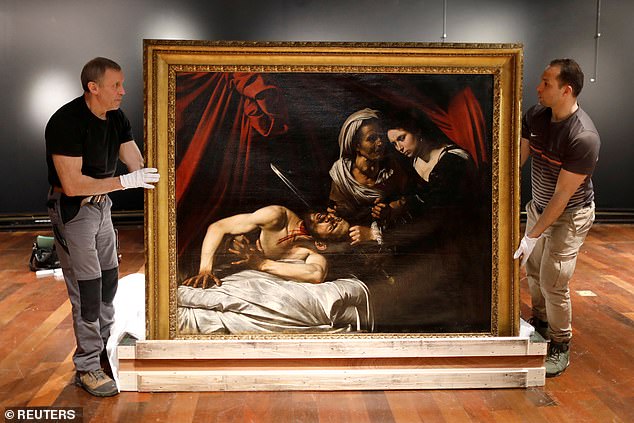 Workers remove ‘Judith Beheading Holofernes’ from a crate at the Drouot auction house in Paris, France 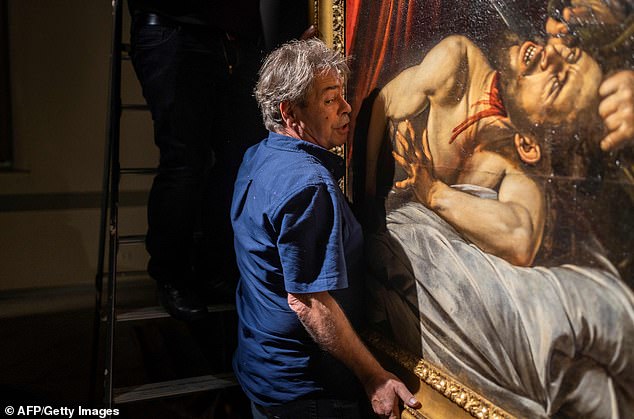 ‘The painting is in an extraordinarily good state, much better than the Caravaggios I have seen in Naples,’ he added

But although experts are united in hailing the quality of the work, a minority of specialists – particularly in Italy – have their doubts.

They believe it is a copy made by the Flemish artist Louis Finson, who worked alongside Caravaggio as he painted.

But Mr Turquin is adamant it is the original from 1606 whose existence was first noted in letters between Italian dukes and art dealers four centuries ago.

He is more convinced than ever since the canvas was cleaned in January, a process that took three weeks. On top of X-rays, the cleaning ‘has shown that the painting was changed a lot as it was painted, with lots of retouching. That proves it is an original,’ Mr Turquin said.

‘Copyists don’t make changes like that, they copy,’ he added. 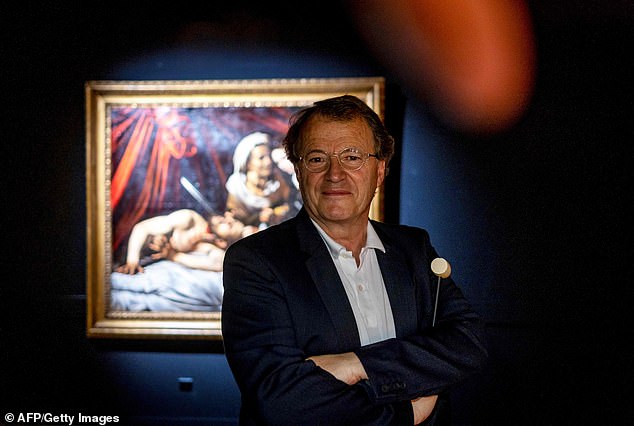 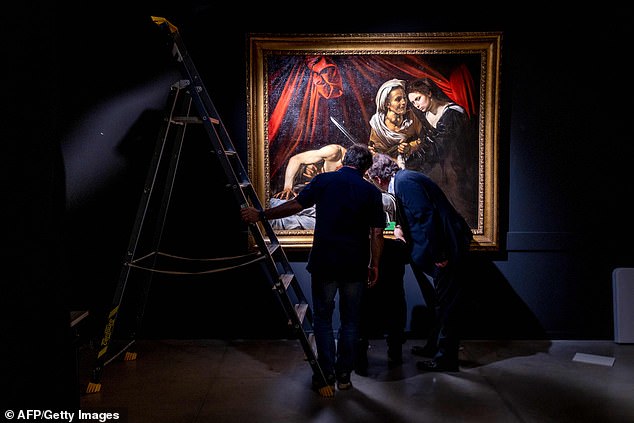 A less virtuoso version of the scene by Finson hangs at the Palazzo Zevallos in Naples.

Standing in front of what has been called the ‘Toulouse Caravaggio’ in a strongroom above his Paris office, Mr Turquin showed the telltale trace of how the artist had changed his mind about which way Judith should be looking.

‘After five years of reflection, no one has put up a counter-argument,’ said the expert, accusing the Italian doubters of ‘pronouncing against the painting without seeing it.

‘They say it’s impossible because Caravaggio painted (no more than) 65 canvases… For them the history of art is set.’

Mr Turquin said the painting marked a turning point in Caravaggio’s development as an artist.

The fiercely original painter had created his first canvas on the theme, the far more formal ‘Judith Beheading Holofernes’ in 1598, which hangs at the Palazzo Barberini in Rome. 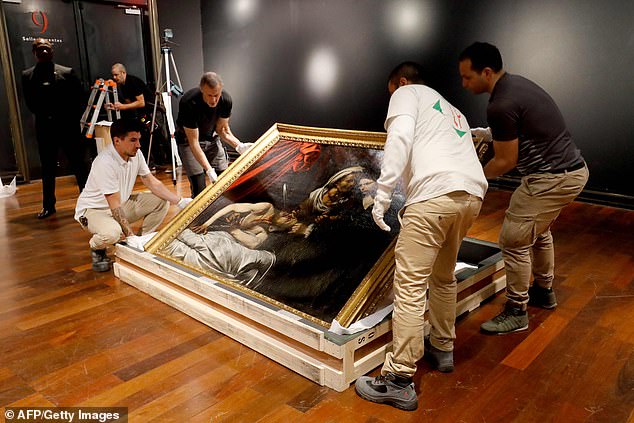 The painting is said to be in an ‘extraordinarily good state’, and has been on display since its discovery 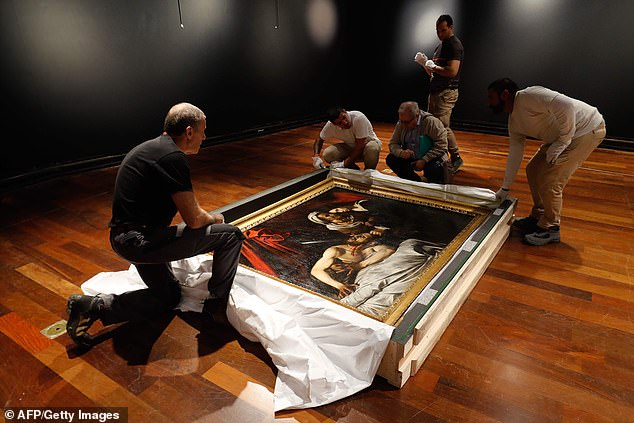 It is not known which ‘major museum’ it may be going to, or to which country it will be shipped

But by 1606 Caravaggio’s life had changed dramatically, and he was on the run for murder. He fled to Naples after being condemned to death for stabbing a man in a street brawl in Rome.

‘He was painting faster, more spontaneously and more strikingly,’ said Mr Turquin, adding that the painting reflects his now darker view of life.

Other experts have speculated that Finson could have added his own touches to the canvas after Caravaggio left suddenly for Malta in 1607, where he hoped he might be safer from his enemies.

The family who owned the painting – who have not been named – believe it may have been brought to France by one of their ancestors, an officer in Napoleon’s army.

The Corsican emperor invaded the then Kingdom of Naples in 1806 and put his brother Joseph on the throne.