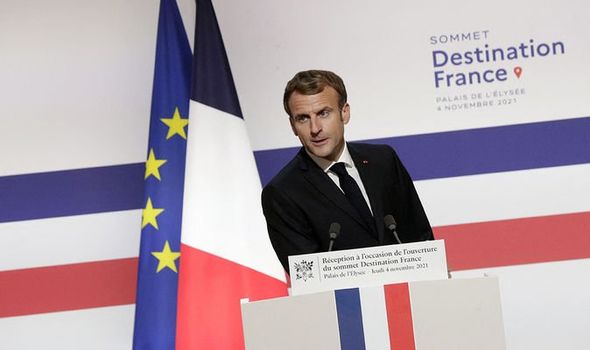 Speaking during a televised debate, Xavier Bertrand said that “because of Macron, we will take the responsibility of an over-indebted France”. He then claimed Macron “campaigns every day with France’s chequebook”, he said, adding on Twitter later that this was something he had been doing for “several months”.

His online remarks follow a five-way, televised debate on Monday between himself and four other contenders for the right-wing Les Republicans party nomination, due to be decided next month.

Also looking to win the nomination is former chief Brexit negotiator Michel Barnier, who repeatedly referred to Mr Macron as “the outgoing president” in the debate.

During the debate, Mr Bertrand said Mr Macron had “not undertaken any structural reforms” he had promised, criticising him for his spending habits”.

He added: “All this reckless spending is spending that we will have to face. We will need to spend less, but with justice and efficiency.

“The French want to turn the page on Monsieur Macron. He had his chance, he failed.

“This five-year term will have been one of the most difficult for our citizens. I am also convinced that I am the one who is best able to beat him.”

While another hopeful Valerie Pecresse accused Mr Macron of having “damaged France”.

Eric Ciotti said that he hopes Macron is beaten “not because I have any animosity against him – quite the contrary – but because I consider that he has been a very bad president of the Republic”.

He added: “A president of inaction, of words, of impotence. Everything has deteriorated.”

During the debate, the candidates discussed the topic of immigration.

Mr Barnier described the country’s borders with other EU nations as being “real sieves”, and called for a moratorium on immigration to “avoid European jurisprudence.”

Mr Bertrand promised that, if elected, he would call a referendum on migration quotas.

The former minister in the Sarkozy government said: “It must no longer be France that adapts to the needs of immigration, but the opposite.

“In the first few days I will ask my Minister of the Interior to take a measure to put an end to that of November 2012 so that no one who has entered France illegally will be entitled to regularisation.”

He added that the migration quota system would be akin to those in Canada or Australia.

Ms Pecresse also called for immigration quotas so that France could “choose the refugees we welcome”.

Mr Pecresse claimed that “immigration has a link with the rise in terrorism, violence and delinquency”.

Mr Ciotti said his first move if elected president would be to call a referendum on migration so that it “recovers its legal sovereignty”.

He said this was “to ensure that France recovers the course of its destiny in matters of security and migration policy. We have lost our sovereignty.”

Members of the right-wing party will choose which of the candidates they want to become their nomination for the French presidency between December 1-4.

The presidential election will be held on April 10 next year.

Whoever is selected will have to face Mr Macron and Marine Le Pen, another key contender, in a run-off.

According to the latest Politico poll, Mr Bertrand would likely place third in the first round of voting, with 13 percent.