Ex-rugby union star Mark Jennings, 28, is spared jail for his THIRD drink-driving offence after court hears he turned to alcohol after discovering he was born as a result of rape

An ex-England rugby union star has avoided jail for his third drink-related driving offence after revealing how he turned to alcohol when his birth mother told him he was born as a result of a savage rape.

Mark Jennings, 28, was arrested after a police officer was forced to draw his Taser on him when he tried to run away from his ex-girlfriend’s Mini Cooper convertible during a traffic stop along the A56 Chester Road in Stretford, Greater Manchester.

The former Sale Sharks and England winger was said to be ‘smelling of intoxicants’ when he was stopped at midnight on June 15. He then refused to provide a breath sample despite repeated requests, Tameside magistrates court heard.

Inquiries revealed Jennings, who was living in a hotel in Altrincham, was serving a three-year ban for driving a Land Rover Discovery while more than twice the alcohol limit on New Years Eve 2019. It followed another drink driving conviction from 2017.

Jennings, who has a history of drink, drug and mental health problems, faced jail at Tameside magistrates court after he admitted failing to provide a specimen for analysis and driving whilst disqualified.

But the 6ft tall and 15-stone rugby star avoided prison and was instead sentenced to 16 weeks imprisonment suspended for two years and was ordered to complete a six months alcohol treatment course. 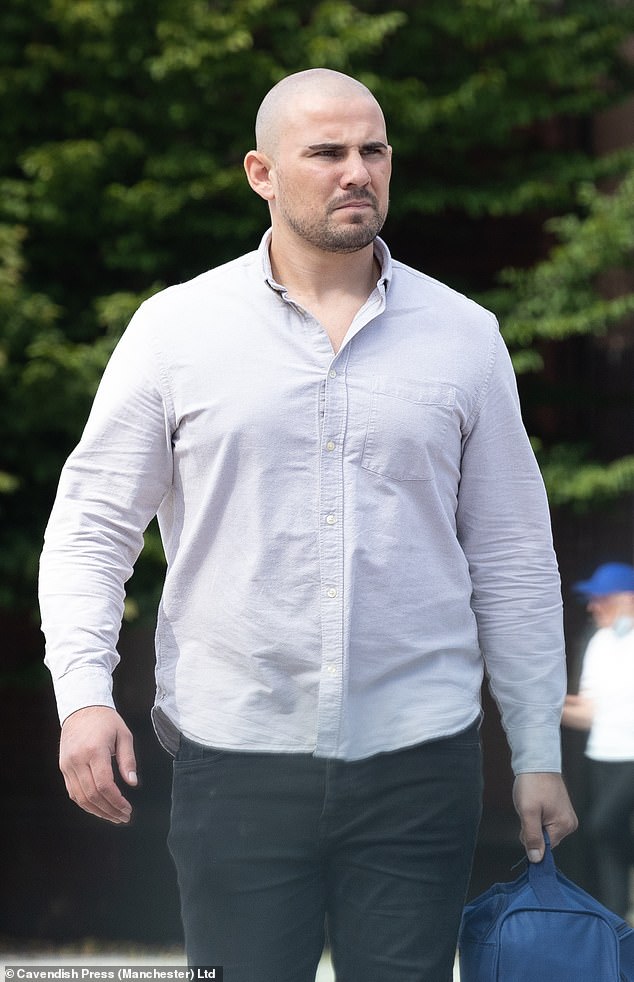 Mark Jennings (pictured), 28, was arrested when he tried to run away from his ex-girlfriend’s Mini Cooper during a traffic stop along the A56 Chester Road in Stretford, Manchester

Jennings’ lawyers argued that prisons were ‘overloaded’ and said jailing him would disrupt help he was getting for his personal difficulties.

Jennings, who is a father to a three-year-old girl, was also banned from driving for four years and was told to pay £213 in costs and surcharges.

The rugby union star signed for Sale Sharks on his 16th birthday, becoming the youngest professional in the history of the club and he played for England at U16, U18 and U20 level.

But he turned to drink and drugs after being stricken by injury and then when he learnt he had been born as a result of rape whilst tracing his biological mother in his native Namibia, the court heard.

On June 15, Jennings was spotted driving the Mini ‘at speed’ along the A56 Chester Road and Paul Green, prosecuting, said he drove off, ‘forcing the police to give chase’.

The police officer, intimidated by Jennings’ size, drew his Taser and demanded the defendant get on the ground.

Mr Green said after he was stopped, officers could smell alcohol on his breath but Jennings refused to give a roadside sample and was arrested.

Mr Green continued: ‘At the station, he refused to give a sample of blood. This was a deliberate refusal to supply a specimen of breath. 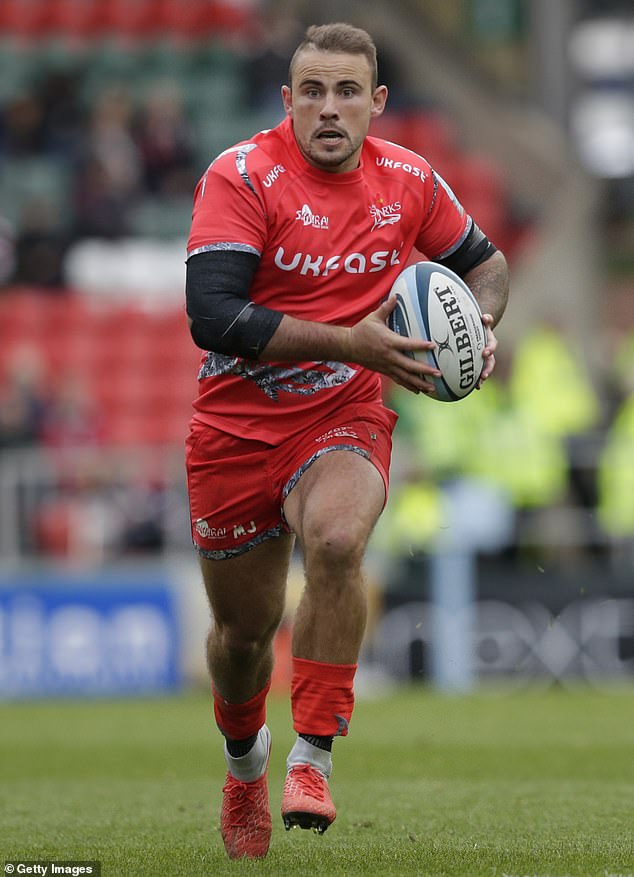 ‘There is significant distance driven. He is in the car on his own driving about on the street.’

Jennings had previously been banned from the roads for 18 months for drink driving in 2017.

He was banned again for three years in January 2020 for driving his Land Rover through Tabley, Knutsford, whilst having 85 micrograms of alcohol in his system. The legal limit is 35mg.

He also had a previous conviction for possessing cocaine and in 2019 was convicted of assault on police after he head-butted one officer and threatened to rape a WPC as he was being arrested over a drunken argument with his former partner Holly Atkins at his luxury former home in Hale.

His lawyer Robert Mann said: ‘This defendant has seen a spectacular fall from grace. He had an unhappy start to life and was abandoned.

‘He was adopted and brought to the UK, He had suffered violence and bullying in his primary years.

‘But he excelled at rugby, was picked up by Sale Sharks and was the youngest ever player to sign a contract – he was 16 at the time. He has had caps in the England international set up.

‘However, in 2016 as a result of his injuries, he was forced to step down from the first team and he became addicted to painkillers because of his injuries. That was the beginning of his slide.’

Last year, Jennings gave a revealing interview detailing his issues with drink and drugs which he said stemmed back to his childhood when his adoptive parents split up and he suffered from bouts of loneliness.

In his interview with Sky Sports Jennings said he initially started with comfort eating but turned to smoking cannabis, snorting cocaine and in his teens, he developed an addiction to painkilling tablets following a rugby injury.

He also recalled how when he was 12, his mother became a pub landlady and he would sneak down into the beer cellar for secret boozing sessions.

He said: ‘Addictive behaviours never left me. When I was training outside with the lads or the 80 minutes on the field, those were the moments for me when my mind was engaged in something and I wasn’t thinking about my past or the darkness. 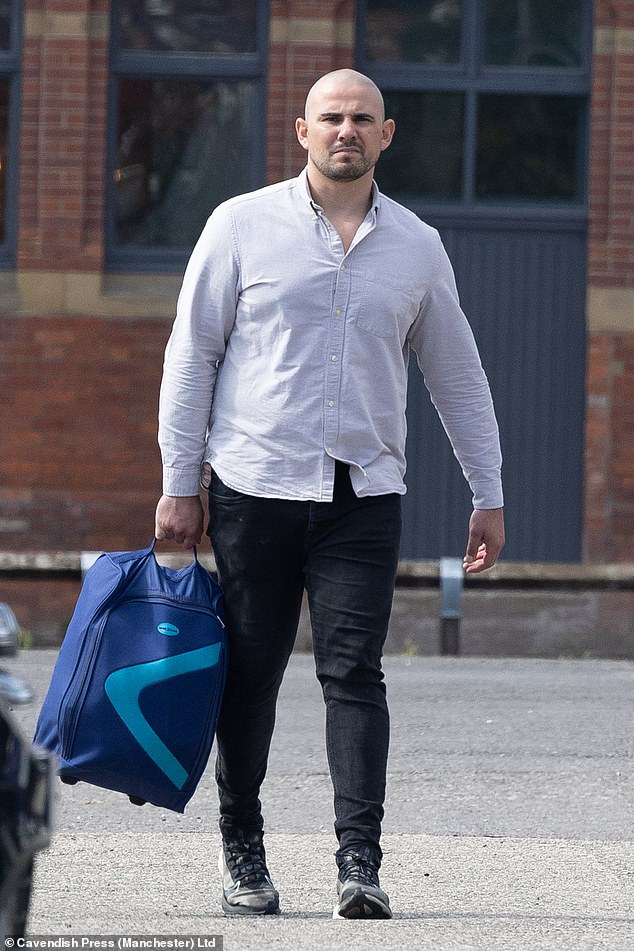 Inquiries revealed Jennings (pictured at Tameside Magistrates court), who was living in a hotel , was serving a three-year ban for driving a Land Rover while more than twice the alcohol limit 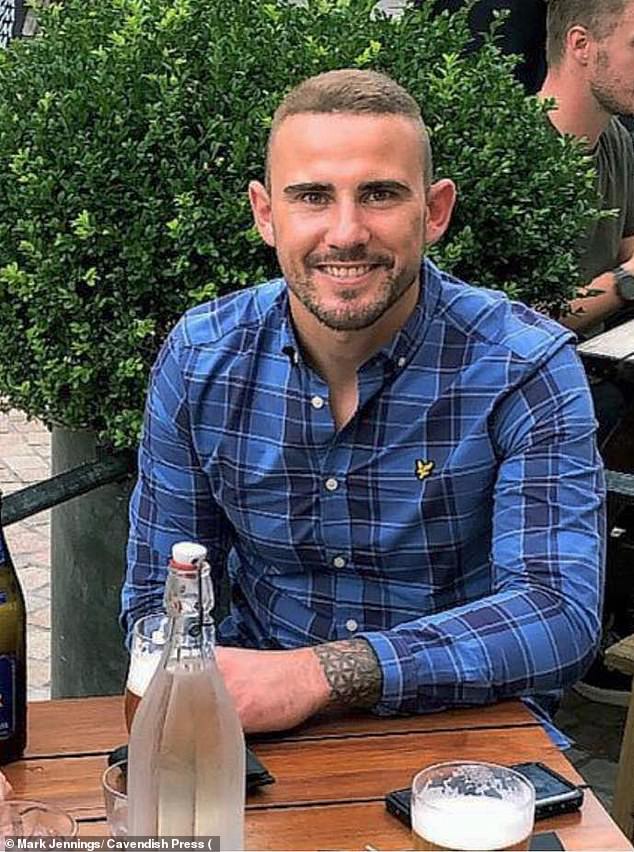 Jennings (pictured), who has a history of drink, drug and mental health problems, avoided jail and was instead sentenced to 16 weeks imprisonment suspended for two years

‘To be stuck on the sidelines and not involved brought up feelings from when I was younger. It was like a switch in my head.

‘Every time I was away from playing, or as soon as I’d finish a game my mind would go straight back to that darkness. I’d want to drink, I’d want to take drugs.’

Jennings later contacted his birth mother in the hope of tracing his biological father only to learn she had become pregnant with him through rape.

He then turned to drink and drugs to deal with his problems, rather than speaking with his friends, his lawyer Robert Mann said.

Mr Mann continued: ‘He did not want to admit that he was struggling and that he had any problems. That has led to a rake of offences all time do with drink.’

Sale Sharks paid for him to go on a three-month detox in Cape Town and Jennings was later diagnosed with ADHD, anxiety and depression. His ex-partner also stopped seeing him from seeing his daughter, Mr Mann said.

His lawyer added: ‘He has been abstinent from alcohol for a period of six weeks and his focus is on remaining clean, securing employment and having contact with his daughter. He can make progress.

‘He is still a young man and is employable giving his history. He has started coaching the grassroots in rugby. There is hope.’