Warsaw: The largest gay pride parade in central and eastern Europe brought thousands of people to the streets of Warsaw on Saturday at a time when Poland's LGBT rights movement is the target of a government campaign depicting it as a threat.

Diplomats from the United States, Canada and other Western countries continued a recent tradition of joining the festive Equality Parade to show support for a community experiencing leaps of progress and a backlash around the world. 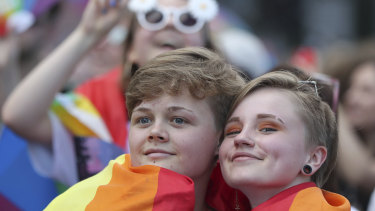 The Equality Parade was the largest gay pride parade in central and Eastern Europe. Credit:AP

In a first, the Polish capital's mayor also participated. Opening the parade, Warsaw mayor Rafal Trzaskowski noted that it is now common for cities across Europe to support LGBT pride marches.

"Not everyone has to go to the Equality Parade but everyone should respect minority rights," Trzaskowski told the crowd from a parade float. "It's really important for me that Warsaw be open, that Warsaw be tolerant."

While many Poles in Warsaw and other cities have increasingly grown supportive of gay rights, a backlash is also underway. In recent months, officials from Poland's right-wing ruling party have portrayed the LGBT rights movement, citing in particular the movement's calls for sex education that stresses tolerance of minorities, as a threat to families, children and society.

And on the eve of the parade, a far-right journalist on public television, Rafal Ziemkiewicz, sent chills down the spines of the LGBT community.

In a tweet, he said "one must shoot at LGBT" people, before adding "not in the literal sense of course – but these are not people of good will or defenders of anybody's rights, [the movement is] a new mutation of Bolsheviks and Nazis."

Slava Melnyk, head of the Campaign Against Homophobia, warned about the possible consequences of such provocative language.

"His words are read by hundreds of thousands of people," he said. "It's possible that one of those people will take his word about shooting at LGBT people literally."

Uschi Pawlik, who was marching with her LGBT Christian group, Faith and Rainbow, described feeling excluded in the conservative and mostly Roman Catholic nation. 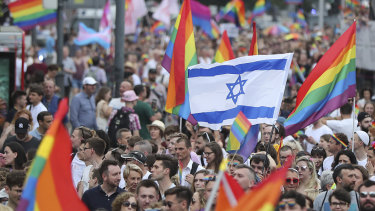 The gay pride parade in Warsaw is the largest in central and Eastern Europe. Credit:AP

"We feel that the government has made a scapegoat of us. Many of us feel excluded by our own country and our own church," Pawlik, 40, said. "So it is painful, but many of us think this is a reason to fight, and not the moment to give up."

Hubert Sobecki, head of Love Does Not Exclude, a group seeking marriage equality, said the situation is particularly frightening for those young people struggling with their sexual identity. He said some are afraid to come out and some straight kids are being bullied because they are perceived as gay.

Call centres have been working to prevent suicides, but they don't always succeed, he said.

Last month a transgender girl killed herself by jumping from a bridge in Warsaw. When a group of people went later with a rainbow flag to the bridge to honour her, they were assaulted.

"There is lots of hate in the public media and by the ruling party, but you also have a growing movement of people realising we are fighting for our lives," Sobecki said. "This movement is not about luxury or privilege, it's about the privilege of staying alive when you are a teenager. It's about survival."

LGBT rights became a key topic of public debate earlier this year when Trzaskowski, from the centrist opposition party Civic Platform, issued an LGBT rights declaration. In one point, it set out the city's commitment to try and help find shelter for gay youth rejected by their parents. In another, he promised to incorporate World Health Organisation guidelines on sex and tolerance education into Warsaw's school system.

Poland's education minister, who was sworn in Tuesday, described the LGBT rights declaration as an attempt to groom children for paedophiles and said sex education is the responsibility of families only.

By seizing on the issue, the ruling conservatives have managed to energise their base and divide the political opposition.

Law and Justice won an overwhelming victory in elections to the European Parliament last month.

Many in the opposition have concluded that supporting LGBT rights did not help them and are now seeking to back away from that issue ahead of national elections in the fall.

In neighbouring Lithuania, an estimated 10,000 people joined a pride parade in the capital, Vilnius. The event took place without incident, a change from the city's first parade in 2008, which included brick throwing and mounted police using tear gas.

In Warsaw, protesters blared loud church music as the parade passed by, but it too, went off without incident.

Warsaw's pride parade is also being answered Sunday with a "March for Life and the Family" in 130 Polish towns. The anti-abortion event will open Sunday with a Mass for children, and the theme this year is protecting children from premature sexualisation.