Sea life watcher Josh Pedley filmed thousands of the barrel jellies just off the coast brought in by Storm Miguel.

He was taking part in a survey on cetaceans – ocean mammals such as dolphins, whales and porpoises – with the Sea Watch Foundation.

The swarm was spotted off New Quay, Ceredigion, mid-Wales.

Josh said: “It was unnerving. We were on the way out of New Quay. There were thousands of them. 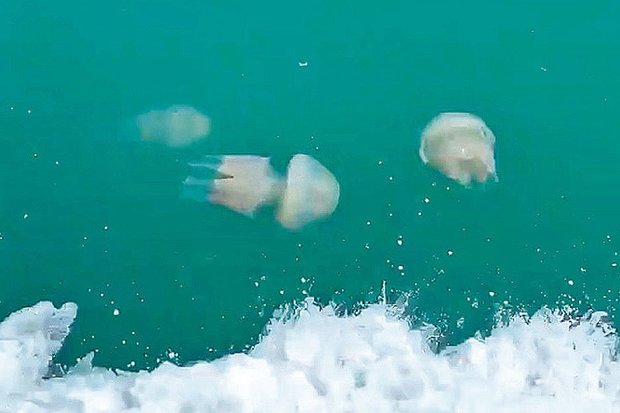 “I could have carried on filming for an hour down the coast and it would have been the same view the whole way. Everywhere there were huge barrel jellyfish, and then loads washed up on the beaches.”

Experts at the Marine Biological Association said they may have come close to shore looking for food or driven by bad weather or strong currents.

Last May, 300 of the creatures were washed up on the New Quay shore.

Barrel jellyfish can be up to three feet wide, but they only have a mild sting and are not a danger to swimmers.