'Matt Hancock reveals he was 'elated' when Dominic Cummings was fired

EXCLUSIVE: ‘I think Dominic Cummings was the ‘chatty rat”: Matt Hancock reveals he was ‘elated’ when the No10 adviser was fired – and claims he was ‘dripping poison’ into Boris Johnson’s ear

Matt Hancock was ‘furious’ at accusations of being the infamous ‘chatty rat’ and instead pointed the finger at Dominic Cummings, his diaries reveal.

Plans for a full lockdown in November 2020 were leaked to newspapers within hours of a meeting of the Covid strategy group led by Boris Johnson.

The revelations sparked a major leak inquiry at No10 in an unsuccessful attempt to identify the ‘chatty rat’.

Now the former health secretary, in the third exclusive extract from his pandemic diaries featuring in the Mail, claims Mr Cummings briefed the Press to ‘bounce the PM into announcing the lockdown sooner than later and stop him U-turning’.

He says the No10 adviser smeared Mr Hancock while ‘dripping poison’ into Mr Johnson’s ear. 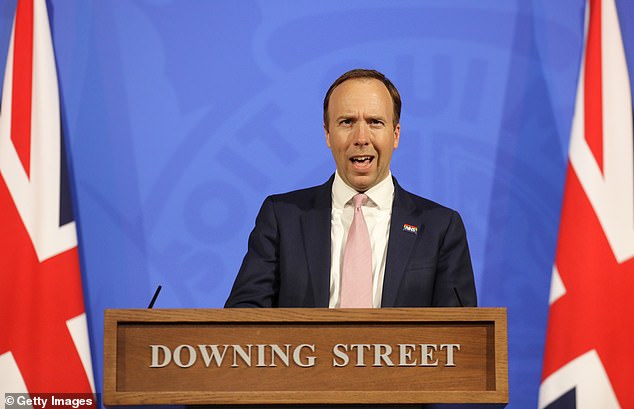 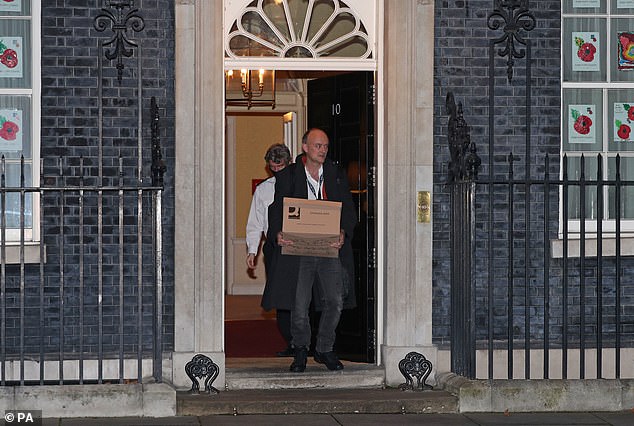 When false allegations emerged that he had been seen in the House of Commons bar late at night or that he had been to have a haircut with Michael Gove, he pointed the finger at Mr Cummings. ‘I think someone’s trying to smear me… I think I can take an educated guess,’ Mr Hancock wrote.

The bombshell claims reveal the open warfare between the two men as the UK headed into the November national lockdown in 2020.

When Cummings was finally sacked that month, Mr Hancock admits he was ‘elated’, labelling the adviser ‘a frightening, damaging, negative force for so long’.

As cases rose in the autumn of 2020, restrictions began to be re-introduced, with regional ‘tiers’ keeping much of North under tight controls. By October health chiefs were calling for a ‘circuit breaker’ national lockdown – but No10 resisted until Halloween when 50,000 people were becoming infected with coronavirus each day.

On the afternoon of Thursday, October 30, the prime minister ‘grudgingly accepted the stark, painful facts’ and agreed to a four-week lockdown at the Covid meeting, Hancock said.

Within hours the former health secretary received a message from ITV’s Robert Peston that read: ‘I understand that this pm [afternoon] you, PM, Chancellor and [Michael Gove] met. Am told 99 per cent likely there will be a full national lockdown from next Wed or Thurs.’

Mr Hancock was enjoying dinner out at an Indian restaurant with his family in Newmarket, part of his Suffolk constituency, when the text came through. He wrote in his diaries: ‘I almost choked on my chapati. So the cat is out of the bag – already! Furious, I forwarded the message to my spads [special advisers] and No10 comms. How the f*** had it leaked already? Only a handful of people knew!

‘By the time I got home, I had an enraged Boris on the phone saying his media people had told him hacks were pointing the finger at me. ‘Whoever is telling you that is lying to you,’ I replied furiously.’

His diaries show how he immediately turned on Mr Cummings. ‘How had this happened? My money is firmly on Dominic Cummings via his acolytes,’ he wrote. ‘The agenda? To bounce the PM into announcing the lockdown sooner than later and stop him U-turning. If they got me sacked into the bargain, that would be a bonus.

‘I texted the PM to say that obviously the accusations against me were untrue and I could prove that if necessary.

‘Half an hour later, he messaged asking me and [his adviser] Damon to bring our phones into Downing Street on Monday. ‘With pleasure,’ I replied coldly.’

Mr Hancock said he ‘hardly slept’ the night before news of the lockdown hit the front pages and he raged at the distraction caused.

‘As lockdown approaches, I should be focused on testing, the vaccine and getting the new measures right to get us all out of this nightmare. Instead I’m fighting for my political life,’ he said. ‘This is no way to run a country.’

The leak inquiry continued well into last year and was never officially closed. For his part, Mr Cummings claimed the ‘chatty rat’ leaker was likely to be Henry Newman, who advised Michael Gove before he went into Downing Street and was an ally of Carrie Johnson.

He made the claim in an incendiary blogpost published in April 2021, which was dubbed a ‘nuclear dom’ in Westminster due to its attacks on Mr Johnson. In response, sources close to the then-PM briefed the media that Mr Cummings had been ‘engaged in systematic leaking’.

In the weeks after the leak, Mr Hancock claimed he faced a smear campaign with various allegations of rule-breaking briefed to the press.

‘One of my allies received a message from a journalist saying, ‘We need to talk about who is framing Matt at some stage…’ I think I can take an educated guess.’

But eventually Mr Cummings was given the sack following a bust-up over staffing and accusations he had briefed against the prime minister.

Mr Hancock’s diaries show he was unable to hide his joy. Writing on November 13, he said: ‘Cummings has gone! I am elated and, more than anything, relieved for the sake of the vaccine and the country.

‘He’s been such a frightening, damaging, negative force for so long. ‘Now we can actually build a government that works effectively,’ I told Simon Case excitedly. My team – officials and advisers – are thrilled.’