Thousands of men who have been Melbourne Cricket Club members for at least 50 years could lose a generous discount that has been in place for 57 years under a motion to be put forward at next month’s annual general meeting.

In a move that is sure to spark debate, the MCC will ask members at their AGM on August 16 to remove a long-standing convention under which 50-year members have been charged just $15 a year for a full membership since 1965.

They are proposing a staged removal of the discounted rate enjoyed by approximately 4000 members in 2022 – all male – over a six-year period that will eventually result in 50-year members instead being rewarded for their loyalty with half-price membership.

Under existing subscriptions that would mean 50-year members are eventually charged an annual fee of $395 by 2027-28. 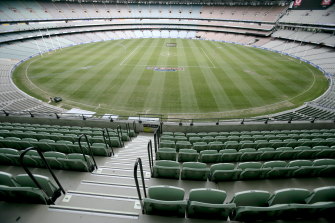 The club is also proposing updating the rule to make it possible for long-serving female members aged over 65 to qualify for the half-price membership if they meet certain criteria relating to their membership, because women were not allowed to be members until the early ’80s.

If the existing situation was retained, no female member would become eligible for the 50-year membership discount until 2034, but the new proposal will recognise women who took up membership soon after they were allowed to join the club.

The response of existing 50-year members or those anticipating moving into that category soon is sure to be strong. However, the club will argue the provision is unsustainable, with growing costs of running the club and the projected increase in 50-year members to 33 per cent of the membership in 30 years.

MCC president Michael Happell has outlined the need for the change in a letter to members while pointing out that when the discount offer was introduced in 1965, the $15 fee was 75 per cent of the full membership fee.

The figure has not changed in that time and is now just two per cent of the annual metro full membership that costs $790. The club even argues in the letter that it is a convention rather than being “formally recognised in the rules of the club”.

Without a change, the club expects a growth in the number of $15 members having access to the discount would have a “significant impact on the club’s finances and the level of amenities and benefits offered to members in the future”. The MCG will conduct 67 events this year, including the AFL grand final and Boxing Day Test.

The club also offers members access to functions, a library and dining options throughout the year.

“The committee has deliberated on these changes deeply and for an extended period of time,” Happell wrote.

“A variety of options and solutions were considered, discussed at length and stress tested before settling on the best package of changes to present to members at the AGM. These changes need to be considered together, as fairness and equity is only achieved through all of these changes being implemented simultaneously.”