Washington: Jerry Daniele believes things that aren’t true. He is confident, for example, that Donald Trump received 75 per cent of the vote in the November election – the largest share of the popular vote of any candidate in modern US history.

The fact the official results show Trump won only 47 per cent of the vote is because of rampant fraud committed by Democrats in multiple states, Daniele says.

"This was not an election – this was a soft coup," Daniele says. He believes that truckloads of illegal ballots for Joe Biden were shipped into key swing states on election night, depriving Trump of his rightful victory.

Daniele and wife Michelle flew six hours from their home in New Mexico to Washington DC on Thursday (AEDT) to join tens of thousands of Trump supporters at a protest against the looming certification of Joe Biden's election victory. 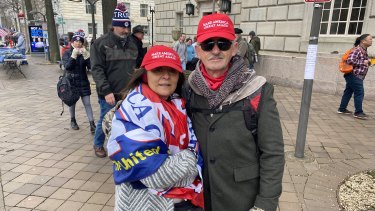 In the morning the protest was calm. But in the early afternoon, after Trump addressed the crowd, the event erupted into violence as dozens of Trump supporters stormed into the US Capitol Building.

The Sydney Morning Herald and The Age have no reason to believe that the Danieles participated in the violence.

But speaking to them – and other protesters at the "Save America Rally" – it was clear why some of the protesters decided to take events into their own hands. 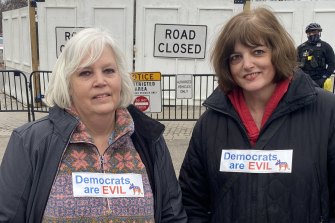 Trump supporters Diane Landers and Julie Cognac at the Save America rally in Washington DCCredit:Matthew Knott

Cognac recently noticed a large number of New York and California licence plates in her area – evidence, she believes, that people were illegally coming from interstate to participate in this week's Senate run-off elections.

"We’re not just going to stay home and shut up," she says.

Lenny Dupere travelled from New Hampshire with wife Linda, who is holding a sign saying: "Media is the real virus".

"There is no way Biden won legally," Lenny says. "It was outright fraud."

Linda says Trump "truly loves America" before comparing his children to Hunter Biden: "His children are all successful and they've made it on their own."

Biden, she says, "will never be my president". 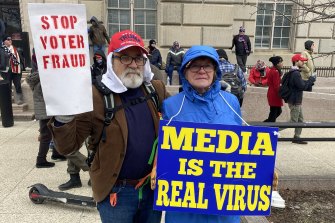 Lenny and Linda Dupere say Biden will never be their president. Credit:Matthew Knott

As we spoke, a protester nearby waved a sign saying "Kyle Rittenhouse did nothing wrong." Rittenhouse, 18, has been charged with murder after shooting two men dead at a Black Lives Matter protest in Kenosha, Wisconsin, earlier this year.

Among the T-shirts on sale is one that reads: "Jesus is my saviour, Trump is my President".

Sitting near the National Museum of African American History and Culture are George and Patti Queenan, who drove eight hours from their home in Massachusetts. Patti is clutching a home-made sign saying: "Thou shalt not steal elections".

"After hours, in the dark, they made sure Biden won," Patti says as her husband cites discredited claims that election voting machines flipped votes from Biden to Trump. 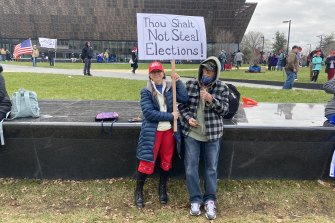 Patti and George Queenan say the battle for the election is part of a bigger spiritual battle. Credit:Matthew Knott

She says she regards the fight over election fraud as just one front in a broader "spiritual battle" playing out in America. It's a battle she believes conservative Christians like herself are losing.

"The whole country is falling down," she says. "You can’t trust the media, public schools are teaching untruths, the liberals are trying to change us into socialists.

"America as we know it is over."

Americans, believe, Meet, the, who
Celebrities