Melburnians have trickled back into the CBD, many still wearing masks even though they are no longer mandatory outdoors, as shops and businesses reopened on Thursday after Victoria’s five-day lockdown.

The 96 tram heading from St Kilda to Melbourne’s CBD was only half full on Thursday morning as Victorians began their first working day after the snap shutdown in response to a coronavirus outbreak that leached out of hotel quarantine. 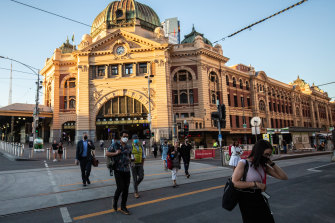 But turning the corner onto Swanston Street, the foot traffic picked up towards Flinders Street Station, as workers hurriedly made their way to offices again.

Grace Forde knows the changing face of the city more than most after working at chocolatier Koko Black’s Swanston Street coffee stand throughout the pandemic.

She said it was eerily quiet when she came to work on Monday, during the five-day lockdown, and her shift dragged.

“It was pretty dead, we didn’t really have any customers,” she said. 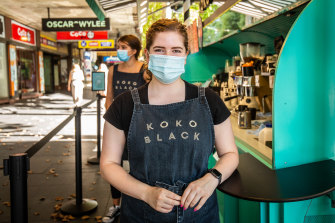 “It doesn’t make a difference for us,” he said.

“The virus has always been bubbling away before we’ve known [about an outbreak]. It’s always safer for us to have it on all the time, just in case.” 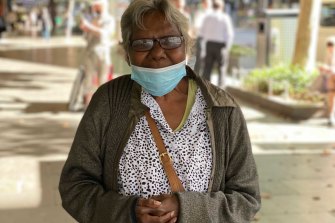 Lynette Agnew travelled into the city from Northcote on Thursday morning to have a look around.Credit:Chloe Booker

Lynette Agnew, wearing a surgical mask , travelled from Northcote into the city to have a look around.

“Because of the lockdown, I wasn’t able to see anyone. I couldn’t get out of my unit for a few days,” she said.

Ms Agnew said her spirits had been lifted by being able to see other people and go shopping. 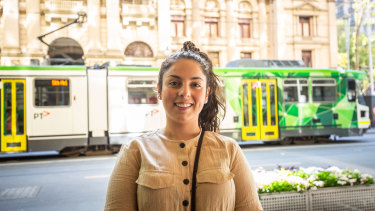 Carla Garro was in the CBD looking for work on Thursday morning.Credit:Scott McNaughton / The Age

Carla Garro was in the CBD looking for work after losing her job as a jeweller at the beginning of the pandemic last year.

“It’s been pretty stressful. It’s been a difficult year,” she said.

However, Ms Garro, aged in her 30s , was feeling positive about returning to the city after the lockdown.

“I’m happy to be here and out and about. I’m not feeling concerned about the virus any more like I was last year,” she said. 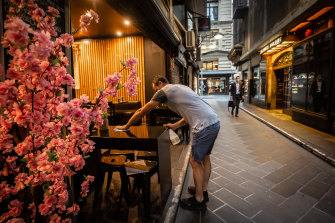 On Degraves Street, cafe workers were wiping down tables and preparing for the day ahead as tradies and office workers stopped for coffee.

It’s far from the bustling city of the past, but Melbourne is once again letting out a soft hum.