Home » World News » Might this be the man to lead a coup against Putin?

Might this be the man to lead a coup against Putin?

Rumour and intrigue kept Kremlinologists happily occupied throughout the seven-decade-long life of the old USSR. There was a brief and welcomed period of openness when Mikhail Gorbachev took over as general secretary of the Soviet Communist Party, but following the USSR’s collapse in 1991 came years of chaotic guesswork about what was going on behind the Kremlin’s walls, where Boris Yeltsin reigned supreme.

History – like life – has a habit of turning full circle. And here we are in 2022, again playing the game of rumour and intrigue. 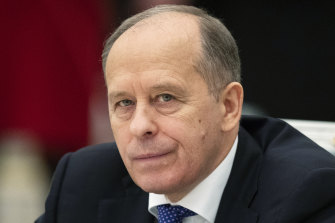 Now as always, the intrigue concerns whether the leader will survive, and in 2022, whether someone within the Kremlin siloviki, or elite, might consider ridding Russia of Vladimir Vladimirovich Putin in a palace coup. VVP, as he’s referred to in some circles, might be dethroned goes the story, as far-fetched in the telling as it was for most Russians that VVP might do what he actually did – invade his West-leaning neighbour, Ukraine.

And one name that is recurrent in the story is that of Alexander Bortnikov, head of the Russian FSB, the Federal Security Service, and one of the successors to the KGB. In the 14 years he has run the FSB, Bortnikov is credited with having turned it into a state within a state, a security apparatus that employs many tens of thousands of people, a brutal sword in charge of counter-terrorism, counter-intelligence and border security.

An ex-KGB agent, Bortnikov is believed to have overseen the poisoning of Alexander Litvinenko, the former spy who defected to Britain where he claimed asylum and worked to uncover Kremlin corruption before a dose of polonium in a cup of tea took his life. Dealing with the president’s political opposition has been Bortnikov’s vocation. 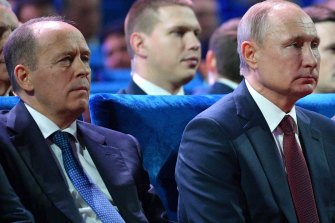 He has most certainly been a loyal aide. Ask your average Muscovite whether he might willingly be the beneficiary of a palace coup, and they’ll probably tell you the 70-year-old is a man who would follow Putin to his grave – which surely can only add to the intrigue behind the story that he might succeed him.

Recently, these one-time colleagues from St Petersburg have fallen out, at least according to the Ukrainian intelligence service, the DIU. Ukrainian intelligence believes Putin is furious that Bortnikov and his FSB misread the mood of the Ukrainians when the threat of a Russian invasion began to heat up in December: the promised flowers to welcome Russian troops “freeing” Ukrainians of the fascists and terrorists who led them never materialised.

Putin is also said to be annoyed (in the extreme) that Bortnikov misanalysed the ability of the Ukrainian army to fight back, an especially egregious miscalculation given Bortnikov has spent years developing a spy network within Ukraine. Of course, verifying whether a falling out has in fact occurred is part of the intrigue and rumour that fuels Kremlinology, but then the sacking of Bortnikov’s FSB deputy, Vyachislav Ushakov, added some cogency to the rumours and a big dollop of hope for the Ukrainian government which has proven itself adept at reading and sometimes wrongfooting Russian intelligence.

DIU went so far as to speculate as to how Putin might disappear after “poisoning, sudden disease and accident” engineered by an influential group of the country’s business and political establishment, which would then install the FSB boss and, the story goes, restore Russia’s tattered reputation. Before long, Russian troops would be withdrawn from Ukraine (notwithstanding the Bucha massacre, the devastation of dozens of cities and towns and displacement of as many as 10 million Ukrainians), and Russia would resume its rightful place at the table of capitalism.

Given his accomplishments in the dark art of Russian oppression, not many Muscovites are likely to welcome a Bortnikov ascension to the Kremlin throne. As one recently commented to me: “I’d rather Putin stay in the job. Bortnikov thinks Stalin’s purges [in which one million Russians are said to have perished] were justifiable.”

In the end, rumour and intrigue might prove to be little more than a Soviet relic and who rules Russia might come down to who is smarter – VVP or the FSB he emerged from and briefly led.