Is your cat a secret serial killer? Miniature cameras that spy on pet moggies reveal they bring home very few of the creatures they kill, study shows

Cat owners who rarely find a dead mouse on their doorstep may think that their pet takes little interest in hunting for prey.

But they may in fact have a covert killer on their hands.

Researchers asked the owners of 105 suburban cats to monitor how many animals their pets brought home for ten weeks in summer and six in winter. 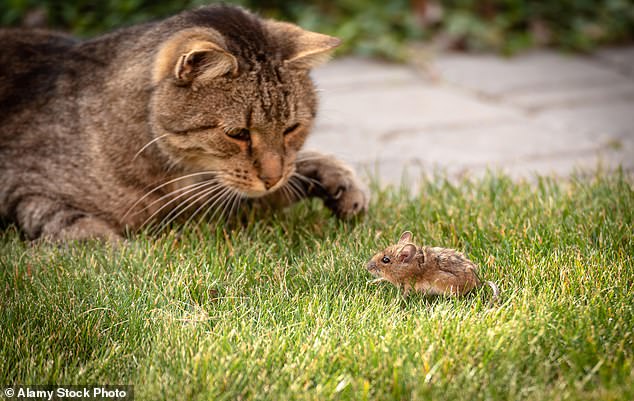 They then followed 20 cats using tiny video cameras attached to their bodies.

The results suggested 82 per cent of the prey caught was not returned home.

The research, published in the Global Ecology and Conservation journal, was conducted in South Africa but could be applicable to the UK, the team said.

Another ‘kitty-cam’ study by Arizona State University found a similar rate of non-returned prey at 77 per cent.

Study author Rob Simmons, of the University of Cape Town, said: ‘If you think of it in biological terms, other solitary cats like leopards will store their larger prey in trees and eat it there later.

‘I believe cats bring home their larger prey to possibly consume it later, although they often don’t because they are well fed.

He advised some simple measures to help reduce predation by cats, such as the wearing of bells, and being kept in at night, when most hunting occurs.

Owners could also consider the building of a large enclosure – a ‘catio’ – so they could have time outside as well as inside.

He concluded: ‘Globally cats have been the direct cause of extinction of over 60 species of birds, mammals and reptiles. All unnecessary.’

The study was published in the journal Global Ecology and Conservation.