The Andrews government faces a new class action on behalf of workers retrenched during the coronavirus second wave, amid claims the hotel quarantine bungle forced thousands out of work.

A statement of claim filed in the Victorian Supreme Court this week is one of three cases against the government, dragging Health Minister Jenny Mikakos and Jobs Minister Martin Pakula into a civil claim expected to attract thousands of litigants who recently lost work. 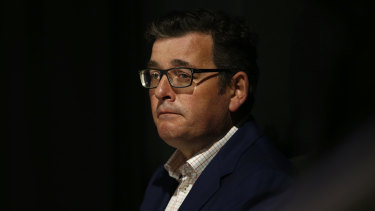 In a separate Supreme Court writ filed on Tuesday, Premier Daniel Andrews faces a challenge to his contentious decision to impose a curfew across Melbourne by restaurateur and Liberal Party member Michelle Loielo, who argues the measure is disproportionate, unreasonable and a violation of human rights.

The lead plaintiff in the class action against the government is 21-year-old Jordan Roberts, who was retrenched from a Tullamarine warehouse on August 14 – less than a fortnight after stage-four restrictions were imposed on metropolitan Melbourne.

Mr Roberts told The Age he was devastated by losing his job, and was struggling to pay the bills after taking out a loan for a new car.

"I understand my boss is also struggling and he’s also finding it difficult to make ends meet. I’ve been looking for other work but there’s just nothing out there," Mr Roberts said.

Carbone Lawyers, representing Mr Roberts, claims his retrenchment can be traced to the introduction of stage three and four restrictions, which they allege were the result
of mistakes made by Ms Mikakos, Mr Pakula, and their department secretaries during hotel quarantine.

The statement of claim filed on September 14 says: ‘‘The second wave was substantially caused by the breaches of the hotel quarantine program. ‘‘Evidence given by Dr Charles Alpren, epidemiologist at DHHS, to the hotel quarantine inquiry on 18 August 2020, to the effect that approximately 99 per cent of current cases of COVID-19 have arisen from the outbreaks at the Rydges on Swanston or Stamford Plaza hotels.’’

The writ accuses Ms Mikakos and Mr Pakula of a ‘‘breach of duty’’ that prompted the lockdown which has cruelled thousands of small businesses across Melbourne.

Tony Carbone, managing partner of Carbone Lawyers, said many businesses had been wiped out during the lockdown, and employers had been forced to lay off staff.

"We think the number of people to lose their livelihoods will increase dramatically when the JobKeeper allowance is wound back. And with all these job losses, we’re going to see a range of social and psychological problems," Mr Carbone said.

"This action is not about small businesses putting off staff. We say they were given no other option because of the failures of this government."

Mr Roberts said he remained hopeful his former employer would re-hire him if the economy rebounds.

Lawyers acting for Mornington Peninsula businesswoman Michelle Loielo in a separate case will ask the Supreme Court to lift Melbourne’s 9pm to 5am curfew, due to remain in force until October 26, or until the state has a 14-day average of five or fewer cases.

Sources with knowledge of the case told The Age the litigation had the backing of prominent business figures. Senior Liberal Party sources from Melbourne’s south-east and the Mornington Peninsula confirmed Ms Loielo was an active party member.

Ms Loielo argues the "curfew directive is invalid on the grounds of irrationality and illogicality", and she blames the lockdown for a 99 per cent drop in her cafe revenue.

"The toll on my children is the greatest concern to me," Ms Loielo says in a sworn affidavit.

"I am the sole financial provider for my three children and I am genuinely concerned that I am not going to be able to provide for my children if this situation continues."

Amid the latest legal threats, Victoria recorded a welcome milestone on Tuesday, declaring no new COVID-19 deaths in the previous 24 hours. There were 42 new cases, while the 14-day average is set to trend below 50 this week.

The legal claims come as Victoria is projected to lose up to 325,000 jobs this year because of the coronavirus pandemic.

According to a PricewaterhouseCoopers report released last week by the City of Melbourne, inner suburbs could lose 79,000 jobs annually over the next five years.

The lead plaintiff in that class action is the 5 Districts NY restaurant in Keilor Park, but lawyer Damian Scattini, from Quinn Emanuel Urquhart & Sullivan, said the firm had fielded hundreds
more inquiries from Victorian businesses since the case was filed on August 21.

A Victorian government spokeswoman said last night it was inappropriate to comment on matters before the court.