A dog thief has been caught on camera fleeing with a family’s pedigree XL American bully and bulldog after breaking into their home when they were out.

The man broke into the home of Cavan Dixon and girlfriend Brooklynn Robert in King’s Heath, Birmingham, to steal the dogs last Friday.

Footage shows the crook walking calmly through a car park at around midday with the animals, each worth thousands of pounds.

In another shot he is carrying the younger dog, Amercian Bully XL, Nitrous, as English bulldog Mercury runs to catch up. 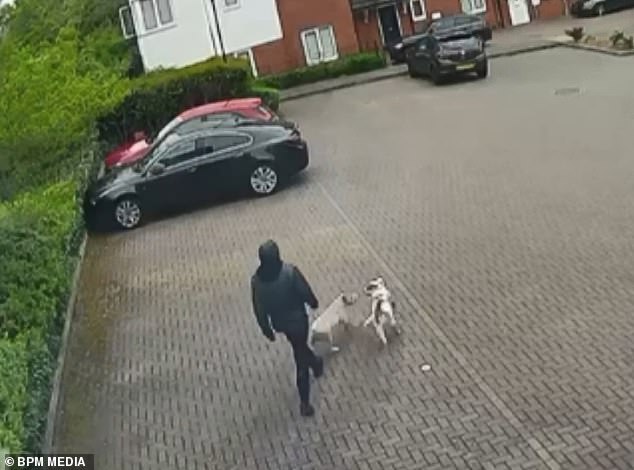 The thief broke into the home of Cavan Dixon and girlfriend Brooklynn Robert in King’s Heath, Birmingham, to steal the dogs last Friday

And footage from a third camera shows the man running with both dogs in tow. Now the couple, who have a three-year-old daughter and another child on the way, are appealing for help in finding their much-loved pets, which were snatched from their home while they were out.

The family believe their two-bedroom house was being watched before being raided.

It comes just days after the Government set up a taskforce to put a stop to ‘cynical and nasty’ pet theft.

Soaring demand for pets over lockdown is said to have led to a surge in criminals stealing dogs.

The taskforce will look into what contributes to the increase in thefts and recommend solutions.

Last year an estimated 2,438 dogs were reported as stolen in the UK, according to research by Direct Line Pet Insurance.

Stealing a pet is already a criminal offence under the Theft Act 1968, with offenders facing a maximum penalty of seven years in prison.

Environment Secretary George Eustice said: ‘Pets are much-loved members of the family, and these reports will be distressing for all pet owners.

‘Pet owners shouldn’t live in fear so we’ve set up this taskforce to thoroughly investigate the issue and ensure that we have the measures in place to stop these criminals in their tracks.’

Mr Dixon told BirminghamLive: ‘I left my house on Friday at around half 11 or quarter to 12 with my step-daughter to go and get my hair done.

‘My girlfriend was already out on a driving lesson. The thief has waited for me to and broke both barrels of the door lock.

‘There was a whole in the fence which we think the thief came through.

‘He has broke the back door and taken the dogs and not taken anything else. We have laptops and Playstation 5 but they were left. He has literally just come for the dogs.’ 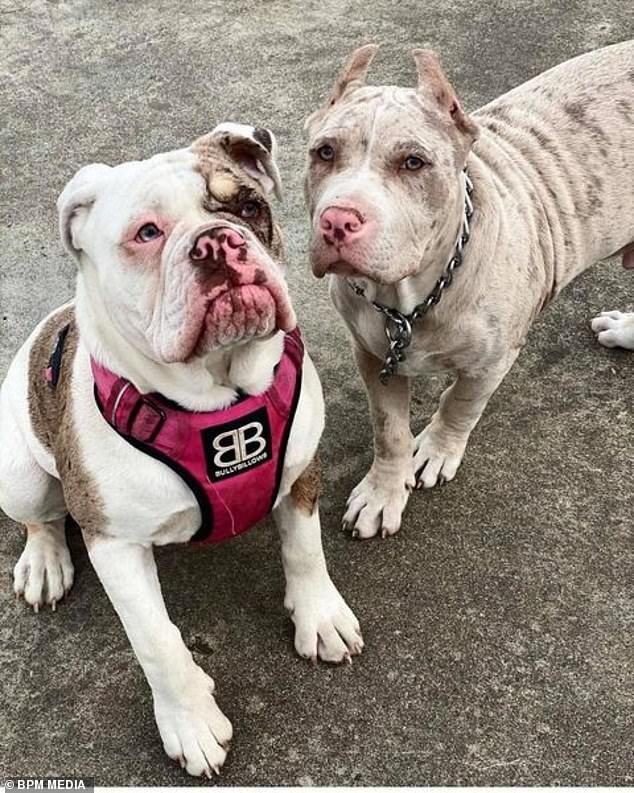 Mr Dixon continued: ‘The way he has taken them is similar to how I leave the house with them. When I take them out I run with them to where there’s a field. And that’s how he did it.

‘He has then come out of alleyway by our neighbour’s house.

‘Nitrous – our American Bully XL who is four-months-old is being carried and our English bull dog, Mercury, she’s ran after him.

‘We think Mercury has seen her brother being carried down the road and followed him.’

The 21-year-old who works as a removals van driver said he believes they were ‘100 per cent’ being watched before the break-in. 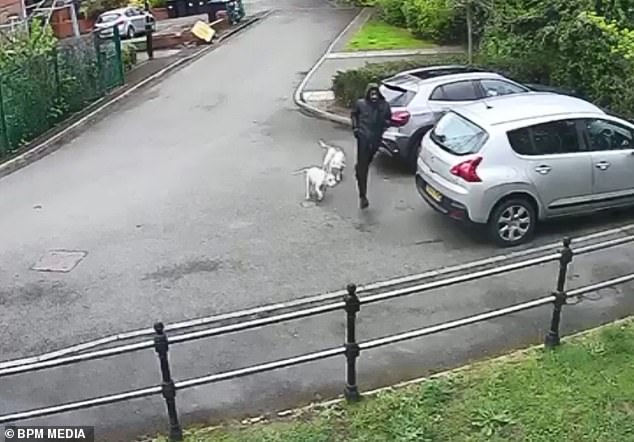 Footage shows the crook walking calmly through a car park at around midday with the animals, each worth thousands of pounds

He said: ‘Why we know we have been sussed out is our house is up a little grove off Brandwood Park Road. It’s such a close-knit community.

‘He’s taken the dogs and been able to go straight on the canal and be on another bit of town in a few minutes.

‘Looking at the CCTV the thief appears to have avoided where the cameras when going to the house.’

Brooklynn returned home at 2pm and saw the dogs were gone with the back door and kitchen door open.

Mr Dixon said the family had been ‘ripped apart’.

He said: ‘Our daughter keeps asking us when the dogs are coming back. She’s three.

‘This has ripped apart our family unit.

‘We have been everywhere doing our own investigating. We have had lots of different leads. We have barely been in our own house and been out to see if we can find the dogs.

‘Dog thefts have gone up during the pandemic. It’s scary that that’s what people are trying to do.

‘The emotional side of it. Destroying families.

‘We have got security, a Ring doorbell but it has still happened.’

He added: ‘I am struggling to sleep. It feels so targeted and so planned-out.

‘It’s an invasion of privacy. These are just scummy people. Just tramps.

‘The reaction of my step-daughter. They have literally stolen from children and it feels like they have kidnapped out babies.’

A spokeswoman for West Midlands Police said: ‘We’re investigating after two pedigree dogs were stolen from a house in Boatmans Reach, Kings Heath.

‘It happened at around midday on Friday (14 May). An investigation is underway.

‘We’d urge anyone with any information to contact us via live chat on our website or call us on 101. Please quote crime reference number 20/245106/21.’