Is this a garden? Monty Don is left puzzled by ‘rewilding’ entry that scooped prize at Chelsea Flower Show

Featuring what appears to be a shed and a pile of sticks, this year’s winning show garden at the Chelsea Flower Show has attracted criticism from traditionalists.

Now green-fingered guru Monty Don has questioned whether the entry ‘is a real garden’ at all.

The Rewilding Britain garden was crowned best in show with a perfect score of 36 points. Looking messy and boasting a beaver dam and lodge, the project epitomised the trend for ‘uncultivated’ spaces.

Daily Mail columnist Don, speaking during the BBC’s RHS Chelsea Flower Show coverage, said: ‘The question it raises to me is.. Rewilding Britain was beautifully done, but was it a garden?’ 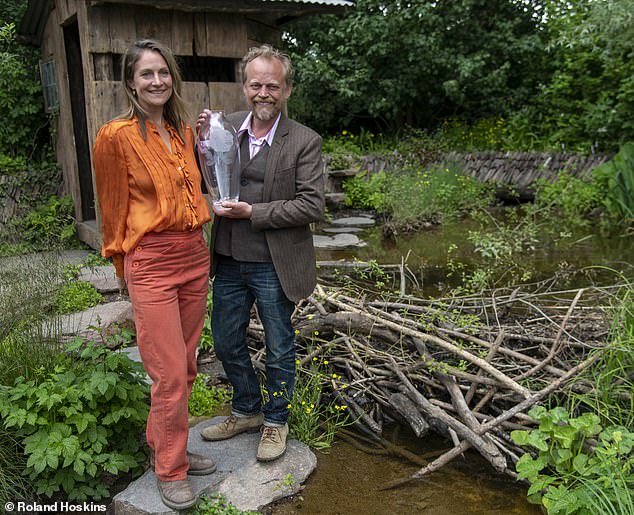 Rewilding Britain’s garden was crowned best in show with a perfect score of 36 points, but green-fingered guru Monty Don has questioned whether the entry ‘is a real garden’ at all. Designers Lulu Urquhart and Adam Hunt (pictured) swapped traditional blooms for flowering weeds – and included a dam made of branches nibbled by beavers

He added: ‘It is a show garden and it has a right to win. Whether it is a real garden or not I’m not sure.’

Fellow presenter Joe Swift agreed, saying: ‘To me it’s a landscape, a recreation, but just bringing it to Chelsea technically turns it into a garden.’

Another entry, The Mind Garden by designer Andy Sturgeon, also notched up a perfect tally of 36 but failed to take the top spot following a secret ballot.

Adam Hunt, designer of the Rewilding Britain garden, told the Mail that the two BBC gardening presenters had a point. ‘Perhaps they should have a new category of best landscape or habitat,’ he said.