People who arrived in Melbourne from Queensland late on Friday walked out of Tullamarine airport without receiving any instructions from health authorities or police and had no idea they were supposed to be tested and isolate after Brisbane was locked down for three days.

The flight was the last to touch down in Melbourne before a hard, three-day lockdown came into effect in the Greater Brisbane area from 6pm on Friday due to community transmission of the infectious British version of COVID-19. 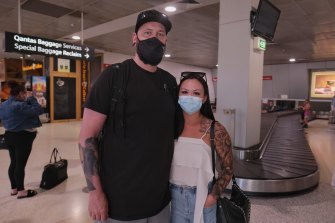 Victoria's Health Department had instructed people to stay in Brisbane if they were already there and not return to Melbourne while awaiting further instructions. Any passengers coming off flights from Brisbane from Saturday will be forced into hotel quarantine, a government spokeswoman said.

The lockdown came after a cleaner at a quarantine hotel in Brisbane was infected with the contagious British strain of the virus on January 2, then moved around the city until testing positive on Wednesday.

But Melbourne man Michael Daffy told The Age that he and partner Justina Bryant had been told "not a single thing," before, during or after their flight on what to do when they arrived. 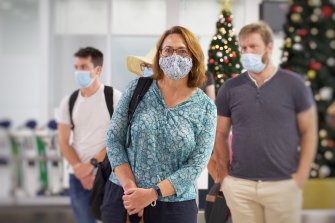 Another passenger, ABC journalist Lisa Millar, was also on the flight that arrived at about 5.30pm. She brought forward her return trip to Melbourne after the Queensland situation escalated. She said she "found it incredible" to have landed in Melbourne without being met by authorities.

"We weren't told anything on board about what we should do, the only reason I know what to do is because I was connected to the wi-fi and I was reading about it on the way." The difference between arriving in Melbourne and her arrival in Brisbane at the start of her trip was "startling," she said.

Another Victorian family, made up of mother Jen, father Dan and daughters Pippa and Tilda – they did not want their surname used – said it was lucky that they happened to be on a flight home from Queensland on Friday night.

They had been holidaying in northern Queensland near Mackay and only passed through Brisbane airport to transfer to a flight to Melbourne. They were in the dark about whether they were required to be tested and isolate or not. 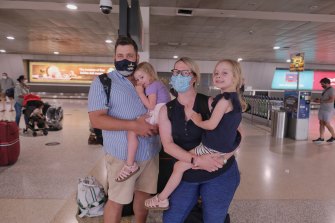 Qantas passengers Jen and Dan, with children Pippa and Tilda, arrive in Melbourne from Queensland on Friday.Credit:Luis Enrique Ascui

The couple said they also were both "very surprised" not to have been met by health authorities at the airport.

"We were just told to check our restrictions and it was our responsibility [to stay up to date]," said Jen.

The Brisbane lockdown came as a family of four in Sydney tested positive to a new, more infectious South African strain of the virus, and an urgent meeting of national cabinet toughened the testing regime at the international borders.

The lockdown prompted supermarkets in Brisbane to reinstate buying limits on essential items as people rushed to the shelves to stock up, while a major highway out of Brisbane turned to gridlock as people tried to beat the lockdown. 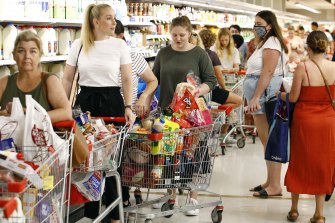 A Jetstar flight arriving in the Northern Territory from Brisbane on Friday turned around and flew straight back as passengers were newly required to spend 14 days in hotel quarantine. South Australia and Tasmania imposed a 14-day quarantine and Western Australia imposed a hard border to Queensland from midnight.

Associate Professor Adam Kamradt-Scott, a specialist in global health security at the University of Sydney, said a three-day lockdown was unlikely to be enough to halt the virus circulating in Brisbane. He predicted it would be extended to at least 14 days – the length of time it takes for any infected people to show symptoms.

The airline asked passengers travelling within the next three days to avoid calling and to visit its website instead as border restrictions were an "evolving situation".

Qantas and Jetstar also said they had experienced a large volume of passengers trying to change their bookings.

Mr Weimar said the Health Department would provide further advice on Monday on the situation in Queensland, but his “personal” advice was for people not to travel there.

“There’s no closure on other parts of Queensland, I think my advice would be to start making plans to come home unless you plan to be up there for a significant period of time,” Mr Weimar told 3AW Radio Melbourne on Friday.

“We just don’t know. And as we’ve seen with NSW, we don’t know how this cluster is going to pan out over the coming days and weeks, so if you have a pressing need to be thinking of coming back to Victoria in the coming weeks, my personal advice would be I’d start thinking about making a plan to come home.

“I would not be planning a trip to Queensland at this time.”

The Victorian border with NSW remains shut. Nearly 580 Victorians and their dependents have now been granted exemptions since the border was abruptly closed on New Year's Day with the number of applications in the system remaining steady on Friday at about 4000.

Victoria recorded just one new case of coronavirus on Friday, with a returned traveller in her 30s testing positive in hotel quarantine, after processing 23,000 tests.

An IT problem with private pathology firm Dorevitch led to the delay in processing the results of another 10,000 tests, all of which returned negative results. The data is expected to be included in Saturday’s totals.

The most important news, analysis and insights delivered to your inbox at the start and end of each day. Sign up here.