More destructive weapons are not the answer for peace 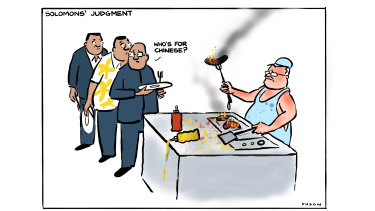 The editorial (29/4) is well-considered. What needs to be further discussed is this: “We have entered an era of the global balance of power and flux”. It could be said the world is at a crossroads for our future with the choices of aggression or developing a comprehensive agenda that gives peace a chance to evolve. The world order is struggling with so many insecurities, but also it serves as a wake-up call. It is the likes of Peter Dutton and such rhetoric as the preparation for war that will preserve peace. Such statements defy logic. No doubt the arms industry would agree with him, since it is the beneficiary of conflict. More and more destructive weapons are not the answer, when most human beings crave peace. Words/actions must not be determined by political imperatives for short-term gains, as currently being demonstrated by the Morrison government.
Judith Morrison, Nunawading

Bristling with defence? Echidna not.
Peter Dutton proudly claims to recognise the threat from foreign invasion. We will bristle with defence, he says. I suspect he is proposing that, like the emblematic echidna, our bristles and attitude will save us. Hasn’t he seen the poor old echidnas squashed as they amble across the road?
He certainly can’t liken us to our other cuddly emblem, the koala. Even though they sit high on a tree, scanning for trouble and mindful of territory, their biggest threat comes from fire and drought. Our national flag emblems, the kangaroo and emu tell us to run very fast. I hope Dutton knows our place in the animal world.
Suzanne Miles, Frankston South

Megaphone diplomacy helps no one
In saying, “The government, with some justification, believed that [national security] would be an area where it had a good story to tell″⁣, The Age shows it has learnt nothing from Australia’s military misadventures in Vietnam, Afghanistan and Iraq (2003) (“Chest-thumping won’t make us more secure”, Editorial, 29/4).
The Defence Minister Peter Dutton conducts megaphone diplomacy with China, by far our largest trading partner and one of the few countries with whom we have a trading surplus, completely ignoring president Theodore Roosevelt’s foreign policy dictum of ″⁣speak softly and carry a big stick; you will go far″⁣.
Our wannabee Doctor Strangelove needs to realise that the first line of defence is better diplomacy. Not submarines arriving several decades hence.
Maurice Critchley, Mangrove Mountain, NSW

Reductio ad absurdum of conflict
The UN secretary-general describes the war in Ukraine as an absurdity in the 21st century. I cannot recall him or any of his predecessors saying that when the US-led coalition, including us, invaded Afghanistan and Iraq, both in the very same century.
Tony Haydon, Springvale

Who we are
David Crowe (Comment, 29/4) quotes Tony Blair saying, ″⁣I believe we are at our best when we are boldest.″⁣ Well, Labor gave us bold in 2019 and Liberals gave us rorts and lies. That was the short route to where we are in 2022. The Liberals are still the same and nothing but more fanciful plans that never get off the ground and Labor shrinking to match.
Nothing will change unless there is a circuit breaker. That option is on the table with a number of strong, community focused independents offering themselves to serve others not themselves. More than any other election, how we vote this time will show us who we really are.
Margaret Callinan,
Hawthorn

Think carefully
Do disaffected Liberals, considering a vote for Monique Ryan in the seat of Kooyong, seriously believe she would be as hard-working, well-connected, or be able to achieve outcomes for their electorate compared with the Treasurer, Josh Frydenberg? Do they think Australia is really best served by single-issue members of parliament, who may lack interest in the broader policy sweep of federal responsibilities, holding the balance of power? How seriously have they considered the chaos of minority government? I encourage all to think carefully about the broader ramifications of their vote both for the country and the future leadership of the Liberal Party. There will be no second chances on May 22.
Ashley Miller, Malvern

Heart elsewhere
I am a Kooyong constituent. Our federal member of parliament has been away for some time campaigning in NSW leaving his constituents to be reminded of his existence by innumerable corflutes peppering the electorate. I can only feel that he has abandoned those he represents or, worse still, takes our votes for granted. I suppose that is consistent with him, along with fellow ministers Alan Tudge and Greg Hunt, dumping hugely on our state government, and praising the NSW government, during the worst of COVID-19. Perhaps his heart is in a NSW electorate.
Graham Devries, Camberwell

Statecraft needed
The Age editorial (29/4) comments, ″⁣We will need allies in the region and the world that are on the same page.″⁣ I think – sorry, I know – that rapprochement with the re-elected President Emmanuel Macron is urgently needed. The prime minister was reported to have sent congratulations, the right thing to do, but to have been ″⁣too busy″⁣ with the Pacific to go further.
French influence extends to French Polynesia, a vast area of the South Pacific and to New Caledonia. Military bases aside, mineral-rich New Caledonia has in the past wavered in its wish to remain with France and unfortunately the minerals of the whole of the Pacific floor will encourage strategic contests. Statecraft is needed.
When will ″⁣caretaker period″⁣ discussion of preparations for peace appeal to us more than exhortations to prepare for war?
Robert Cooper,
Box Hill

Doctors shortage
During John Howard’s prime ministership intake to our medical schools was cut substantially, because supposedly we were over-supplied with doctors. Ever since we have had doctor shortages and particularly more recently.
Those who missed out on entry, would now be around 40 and at the prime of their careers. Howard’s foresight was certainly lacking at that time.
John Groom, Bentleigh

Freedom to exclude
The solution to what the legislation should be about exclusion of transgender men from women’s sports needs to take into account how much difference it might make in any given sport, and the best people to judge that are those in the sport via their representative bodies. The Save the Women’s Sports Bill may create a ″⁣blanket right″⁣ to exclude on the basis of sex, but that is fairer to birth sex sportswomen than restricting the right to exclude. Anyone who has watched Caster Semenya running with a man’s physique and beating the field should realise the need for freedom to exclude.
Anthony Whitmarsh, Viewbank

Town hall bouquets
So good to see the old town hall political meeting back in vogue. (″⁣Fiery but civilised: Goldstein community forum pits Tim Wilson against Zoe Daniel, 29/4) By allowing their constituents the opportunity to observe their candidates in real time and beyond the 10-second, edited TV news grab it gives the electorate a close up and personal look at their voting options. The public meeting and the dispatch box debate were among the great strengths that won Robert Menzies seven elections. Maybe there’s a lesson there for the current member for Kooyong: brush up on his debating skills and forget honing his kicking style.
John Mosig, Kew

Broken heart and hope
The Good Weekend issue (23/4) is particularly riveting for the masterful depiction by Zach Hope of the tragedy at Yuendumu, appropriately titled ″⁣Broken Heart″⁣.
Hope has unravelled the many interwoven knots of oppression, neglect, hubris, ignorance and suffering that continue to be defining features of our past and present colonial reality.
But what is even more compelling is the way Hope has captured the enduring strength of the Walpiri people, who transmute pain, shock and injustice into the healing that comes from their profound sense of community and their connection to the goodness of nature. A healing we can be grateful for as it permeates our common home and national spirit.
Rose Marie Crowe,
McKinnon

Looking backwards
In order for Scott Morrison to sign up to zero by 2050 in Glasgow, the prime minister did some internal pork-barrelling by agreeing to the Nationals’ demands for methane to disappear from emissions reduction targets, and for funding for the regions.
What has become clear since Glasgow is that the Coalition as a whole is not committed to zero at all – $1 billion was set aside in the budget for the gas industry.
Federal minister Bridget McKenzie, in defending new coal-fired power stations, said, “When we have carbon capture and storage technology employed, we actually lower the emissions significantly of that type of power generation. That is absolutely something that we continue to support.” Note the future tense: “when”. Carbon capture and storage is pie-in-the-sky technology.
Surely the nation has had enough of the damaging, backward-looking government that calls itself the Coalition.
Fiona Colin,
Malvern East

Too much protesting
Your correspondent opposes a female Hamlet (Letters, 29/4) and asks ″⁣Is this the beginning of a wholesale revision of the Bard’s work?″⁣ She seems to think this is something new but is too late by more than a century. Sarah Bernhardt starred in Le Duel d’Hamlet in 1900. Mon dieu: a female Hamlet in a French film!
Peter Price, Southbank

Cringing chrysalis
The only result that is always guaranteed at election time is, who you vote for will emerge as a politician.
Winston Anderson, Mornington

Politics
Are the endless daily photos of Scott Morrison doing things he is untrained or unqualified to do, some kind of visual metaphor The Age wants us to consider about him?
Denis Liubinas, Blairgowrie

With the Liberals having a Coalition partner like the Nationals, who needs Labor?
Henry Herzog, St Kilda East

After the election, physiotherapists will be very busy treating all the nodding acolytes behind aspirants for neck ailments.
Joan Mok, Kew

Someone should remind the PM that a booming economy does not pay the ever-increasing rent.
Annie Wilson, Inverloch

The prime minister has failed at the one thing we need – a science-based, glorious vision of our clean energy future for everyone.
Barbara Fraser, Burwood

How much more out of touch can our discarded prime minister John Howard be? What planet does he live on?
Randall Bradshaw, Fitzroy

When Pauline Hanson directs preferences to Labor to target left-leaning Liberals there has to be a message there for Labor.
Gary Sayer, Warrnambool

The $250 payment is essentially not for your pocket, it is an economy boost. By spending it on anything, our communities and economy will benefit.
Vivienne Whitehead, Eagle Point

It is unbelievable that the government is running a 1950s Menzies ″⁣yellow peril″⁣ campaign. Is this a sign that it is bereft of any policies for Australia’s future?
Brian Doig, Sandringham

There is a shortage of GPs in regional towns. I would prefer more GPs than the wonderful tax cuts we have been promised.
Michael Brinkman, Ventnor

Corflutes are plastic. They are not only offensive to the eye but polluting to the environment.
Barbara Lynch, South Yarra