A mother-of-two has shared shocking images of the injuries she suffered when her partner bit her nose and face before holding his hand over her mouth until she could not breath during an unprovoked attack.

Rebecca Mavin, 27, took to Facebook to post distressing pictures of bruises to her face, a swollen lip and cuts to her throat following the incident outside her front door in Colwyn Bay, north Wales, on June 10.

Ex-partner Craig Pilkington, 34, will not serve any prison time for the attack after being handed a 20-week suspended jail sentence when he pleaded guilty to a single count of assault by beating at Llandudno Magistrates’ Court on October 22.

Pilkington, of Ffordd Y Mynach, was also ordered to pay fines totalling £920 and was made subject of a restraining order.

However, Ms Mavin has said the sentence is a ‘failure of the system’ and too lenient for the man who pinned her to the floor and bit her nose. 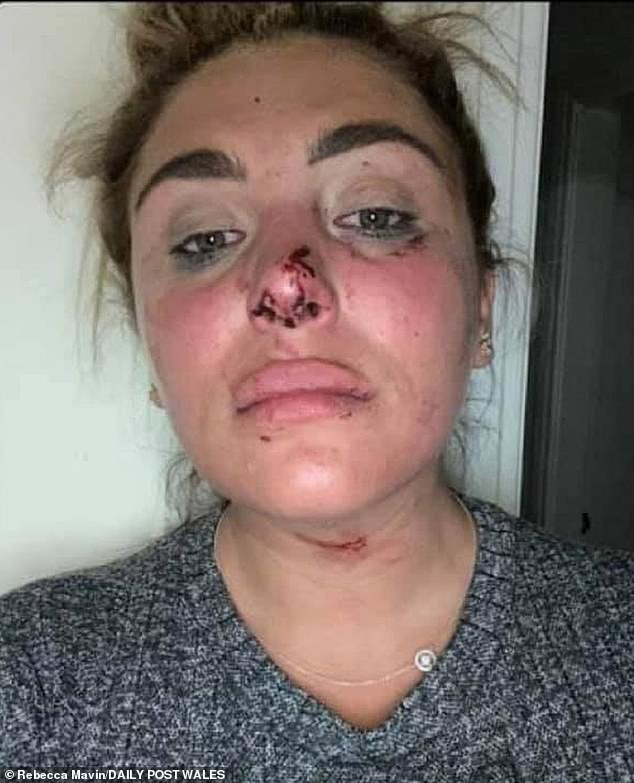 Rebecca Mavin, 27, shared pictures of her horrific injuries, including cuts and bruises to her face, on Facebook 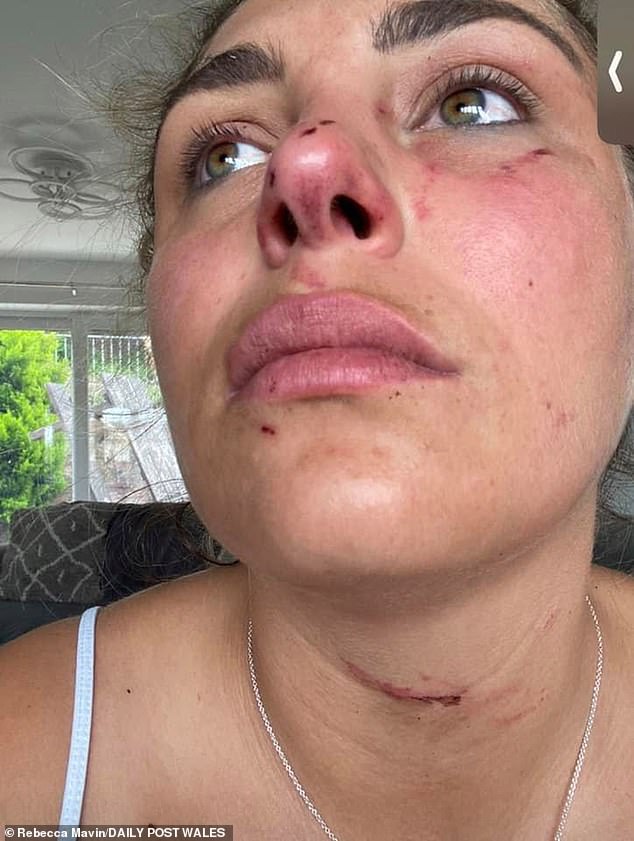 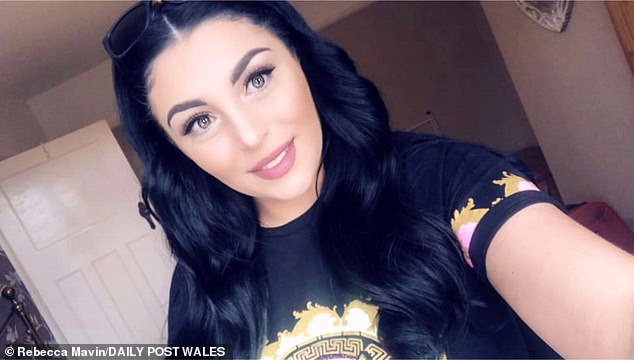 Ms Mavin, from Colwyn Bay in north Wales, has spoken out about the injuries she suffered during an unprovoked attack at the hands of her ex-partner

She has now bravely spoken out about her the horrific ordeal she experienced at the hands of Pilkington and her disappointment in the justice system.

Ms Mavin recalled seeing ‘glimpses’ of Pilkington’s ‘violent’ nature during the first few months of their relationship, but having known him for many years through her sister, she believed stories about his past were just ‘lies through a jealous ex-partner’.

However, the couple were on their way to Ms Mavin’s home on the night of the attack when they began arguing over an issue on social media.

As she arrived him and began to unlock her front door, Pilkington pounced and threw her to the floor before ‘biting her face’.

Ms Mavin said: ‘I begged him to stop, to which he started biting my face and nose.

‘I started screaming for help and at that point, he then tried to make me quiet by covering my mouth and holding my neck so hard the skin in my upper mouth had ripped.

‘I’ve never been so scared in my life and I thought “this is it he’s going to kill me”. I have children this vile, unprovoked attack could have taken me away from them.’ 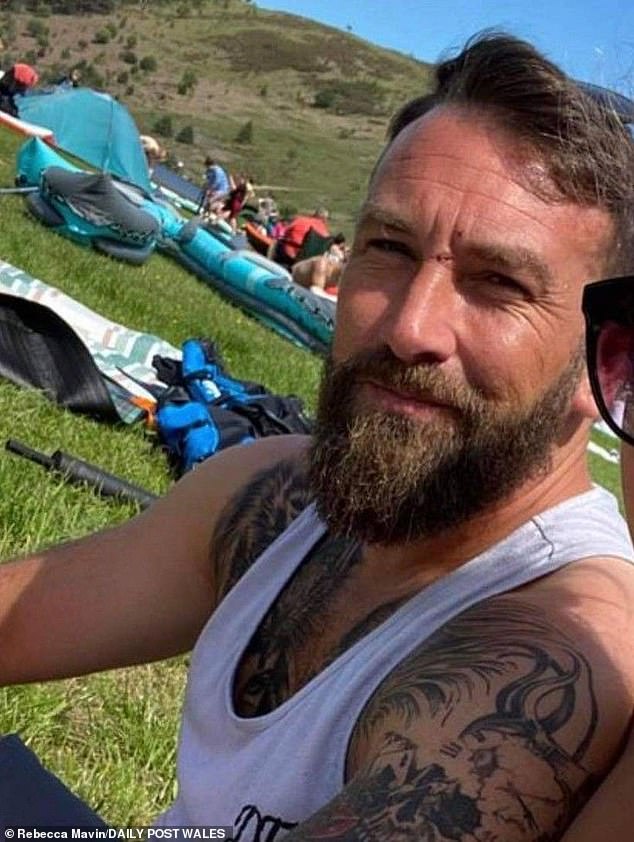 Craig Pilkington from Mochdre, Conwy, was handed a 20-week suspended jail sentence for a single count of assault by beating at Llandudno Magistrates’ Court on October 22

She was rescued by a neighbour who heard her ‘faint’ screams from beyond Pilkington’s hands.

As the neighbour opened the door, Pilkington made off from the scene.

While the neighbour let Ms Mavin into their home and called police, she realised she had no keys after her former partner had taken them and dumped them in the road.

She continued: ‘People need to know, it’s not acceptable for a male to hit a female, and it’s okay for females to speak out about it.

‘He pleaded guilty for the charges against him, and was still only given such a lenient sentence, what’s it going to take?

‘I understand, the sentence is something rather than nothing but he should have been locked up and the keys thrown away, I feel like myself and many others have been let down by the justice system.

‘This man threw me across my garden, pinned me down on the floor, got on top of me, bit my nose and face, and then pursued to put his hand over my mouth and neck until I couldn’t breathe.’

Ms Mavin believes she is ‘lucky to be alive’ and the result of the incident ‘could have been much worse’.

She has now sought to raise awareness moving forward to ‘hopefully prevent it from happening again’.

Her mother, Christine, was the first to share the pictures online.

She wrote: ‘As a mum, it’s the worst when you get the call from the police…

‘I have severely struggled with this as a parent these past months,

‘But, Becky (Rebecca) you stood up for every woman out there who has suffered violent abuse.

‘You are truly well loved by your family and have many good friends who are there for you 24/7.

‘I’m am extremely proud of your resilience despite your mental suffering and facial scars to stand up for what you believe in to help others, And you will always be my world.’