A distraught mother whose daughter committed suicide after suffering years of online abuse has spoken of the trauma she endured while watching her only girl get bullied to death.

Jackie Fox, 52, said she struggled to find the strength to carry on after discovering daughter Nicole hanged at her home in Dublin in January 2018 at the age of 21.

The suicide came following four years of cyber and physical bullying at the hands of a group of girls who Nicole considered to be her friends.

Jackie recalls how her daughter – known affectionately as ‘Coco’ – was burned with cigarettes and hair curlers, pushed, hit, and mocked in a cruel WhatsApp group that included taunting her after a failed suicide attempt in 2015.

Recalling the moment she turned Nicole’s life support machine off after her second suicide attempt, Jackie said: ‘I got on the bed with her, kissed her, held her hand and told her that nobody would be able to hurt her again.’ 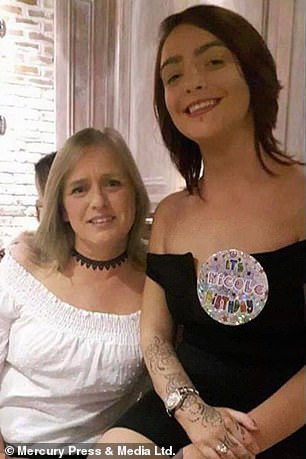 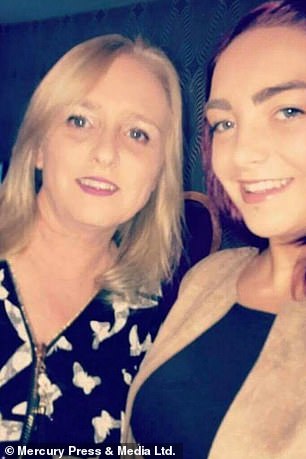 Jackie, a teaching assistant, said Nicole had grown up as ‘the funniest, bubbliest and cheekiest little girl’ and had never suffered with health problems or anxiety.

But that all changed aged 17 when a group of girls began targeting her following a row over a boy.

‘She was about to turn 18 and wanted to go to her first club,’ Jackie recalled. ‘She went with a male friend and there was a girl there who liked the friend.

‘She realised a way to get close to him was to become friendly with Nicole but when she realised it wasn’t going to happen, she turned on her.

‘They attacked her in a club a few times. They put cigarettes out on her body, they dragged her down some stairs by her hair and one night, someone pushed her so hard that she dislocated her hip.

‘They would dance next to her and put an elbow in her face or swipe her drink off the table.’

‘One night, a girl who had befriended her came round to the house, started curling her hair and burnt Nicole with the curlers.’

Jackie said she contacted the police but officers told her that, since Nicole was over 18 at that point, she would have to come in and make a complaint herself.

Nicole refused, fearing what the bullies would do to her if they found out she had attempted to get them in trouble.

Then, in 2015, Nicole attempted to kill herself by taking an overdose – landing herself in hospital for four days.

Afterwards, she was referred to mental health services but Jackie says they brushed her off, saying it was just a phase she was going through.

That left Jackie to pick up the pieces herself.

‘Trying to pick her up after that was so hard and she spent a lot of time in her room.

‘I would lay in bed with her and we’d talk then when I went to bed I would hear her crying. She would wake up so sad.

‘That was what she was like, thinking about other people. I tried to bring her up, I’d take her out and take her shopping.’

But any hopes that Nicole’s suicide attempt would convince the bullies to quit turned out to be in vain – in fact, the harassment intensified.

‘She was still going out with a smile on her face and they didn’t like that,’ Jackie said.

‘After she’d overdosed, they were bragging that they were the ones who’d caused it.

‘Then they made a WhatsApp group where they just said nasty things.

‘Nicole found out about it and more and more people were in it.

‘They were saying she should kill herself and that they were going to put her on life support.

‘At the time, there were no laws against online abuse so they were destroying her and getting away with it.’

Despite the continued harassment, Jackie says Nicole seemed to be showing signs of improvement and hit a high point at Christmas in 2017 – just days before she took her own life.

She recalled: ‘Nicole loved Christmas, it was her favourite time of year.

‘We’d all gone round to my mum’s house and she seemed so much better.

‘She looked happy and like she was turning around.

‘I didn’t notice but she had gone around each individual family member getting a photo with them.

‘Then she’d gone out for New Year and had the best night ever, she couldn’t stop talking about it.

‘I dropped my guard and the guilt kills me.’

Recalling the day of Nicole’s suicide, Jackie said she left her daughter alone to go to the chip shop to get dinner – and found her hanged when she arrived home alongside one of her two sons.

Jackie performed CPR and called an ambulance, with medics managing to restart Nicole’s her heart on the journey.

She was placed on life support in hospital, but doctors broke the news to Jackie that her daughter had suffered irreparable brain damage and could not be saved.

After two days, Jackie made the heart-breaking decision to turn off Nicole’s life support. It was 5am, on January 20. 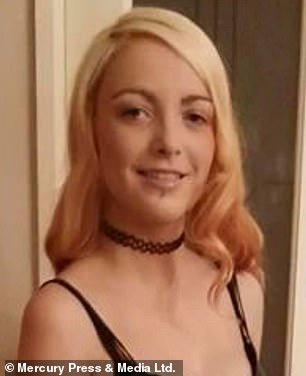 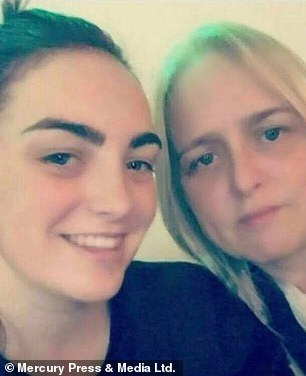 Nicole hanged herself at home in Dublin in 2018, and last year Jackie saw anti-bullying laws passed alongside a memorial to her daughter that was written into Ireland’s statute book

Recalling the moment before she died, Jackie said: ‘I got on the bed with her, kissed her, held her hand and told her that nobody would be able to hurt her again.

‘She died on a Thursday and she was going to go out that weekend.

‘She had plans to get her eyebrows done, she’d gone and bought a beautiful red dress that I still have with the tags on.’

After Nicole’s death, Jackie began to fight to make online bullying a criminal offence in Ireland and in 2020, Coco’s law was passed in honour of Nicole.

Jackie said: ‘When I was told that the bullying wasn’t a criminal offence, I was in shock. I slept in Nicole’s bed and I was ready to go with her.

‘I was torn between my two boys and being with Nicole. I just wanted to see her smile again.

‘Fighting to change the law was me in survival mode, it gave me a reason to get up in the morning.

‘It took me two years and ten months and now it’ll be in the statute book for longer than I’ll be around.

‘I wanted to make sure Nicole would never be forgotten and this is her legacy.

‘People always say you must be so proud but it’s too late for me and Nicole, this should have been a criminal offence a long time ago so it’s really bitter sweet.

‘I’ll never see her smile again or hug her or hear her say she loves me.’

Jackie and her sons were forced to move out of Dublin out of fear they would bump into the people responsible for Nicole’s death and Jackie has given up her job to give talks at local schools and colleges about Coco’s law.

She said: ‘Nicole was my only little girl. Growing up, she was the funniest, bubbliest and cheekiest little girl.

‘She had a great childhood and she never suffered with her mental health or anxiety.

‘We had a mobile home next to the sea, it was our happy place, we used to go crab fishing and jumping off the pier and that’s where I’ve moved to.