Mugger jailed after she distracted victim by kissing him

Mother, 25, and her friend are jailed after she distracted a stranger by kissing him as she stole his wallet in a ‘hugger mugger’ attack before they choked a taxi driver 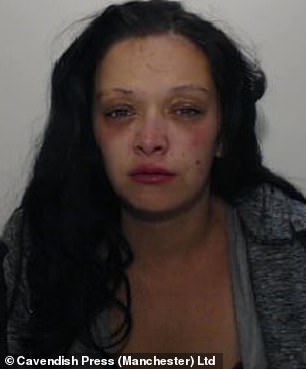 A mugger who distracted one victim by kissing him on the cheek then falsely claimed a cabbie tried to rape her as she snatched his phone was jailed today.

Mother-of-one Browne tried to use his Mr Loughran’s card in a nearby ATM but fled with Whittaker in a taxi when victim confronted them as he realised what happened on March 5 2017.

They choked the driver and told him to hand over money before stealing his £200 iPhone. They then told a bystander offering help that the driver tried to rape them.

The women, from Rochdale, Greater Manchester, targeted Mr Loughlin when they spotted him drinking alone at a Wetherspoon pub.

Miss Lisa Boocock, prosecuting, told Minshull Street Crown Court in Manchester: ‘When the defendants approached him he bought drinks for all of them and was in their company for a couple of hours.

‘At around 11pm he went outside to have a cigarette and the two came out. Under the pretence of kissing him Miss Browne picked his wallet from his pocket and they then left. 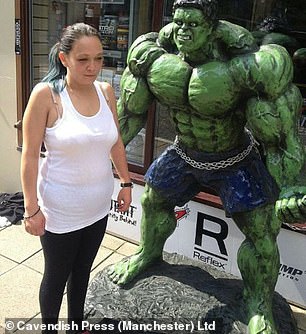 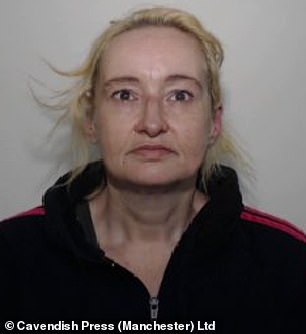 ‘He followed – they had gone not very far to the nearest cash point. Miss Browne tried to withdraw money from his account but the pair were confronted. They denied they had taken anything from him and they left in a taxi.

‘The driver was told by the two defendants to drive to the train station but as he got into the vicinity he was grabbed by the clothes from behind and pulled back by the person sat behind – effectively choking him.

‘The front seat passenger produced a silver object – they say it was a key – put it to his throat and a demand was made to ‘give us the money’ – he feared it was a knife. They exited the cab without money but did leave with his telephone.

‘Other taxis came to the area to stop to help and they said the taxi driver had attempted to rape them, and then left the scene. The phone was not recovered.’

Browne had previous convictions for fraud by false representation, possession of a knife in a public place, and burglary of a non-dwelling between 2015 and 2017. Whittaker had a record dating back to 1992 mainly for dishonesty offences.

Browne’s defence barrister Thomas McKail said in mitigation: ‘Her behaviour was reckless and impulsive; the defendant is a woman who has been prescribed anti-psychotic medication she had not been consuming her medication.

‘She is 25 but her maturity means she is functioning at a lower level. She herself has a very limited recollection, she offers apologies and remorse is shown.

‘This is an individual who was known to the care system and has had employment working in a warehouse. She was in a relationship in 2011 – 2015 which was abusive both physically and sexually the impact of that relationship led to her five-year-old being adopted, she left that relationship after a truly traumatic period of her life.’

For Whittaker defence counsel Harriet Johnson: ‘She is disgusted in herself and make no excuse or justification for her actions there is considerable evidence of remorse.

‘She had no convictions between 2003 and 2017 all of her previous offending was due to a powerful heroin addiction which she has succeeded in controlling since 2003 – she is the rarest thing we see in the court someone who has been addicted to heroin and lived to tell the tale.

‘She suffers from bipolar and wasn’t taking her medication she had also been drinking, but as part of her remorse and recognition of the seriousness of what happened she has almost entirely abstained from alcohol since.’

Sentencing Judge John Potter told Browne: ‘I appreciate that in your life you have suffered significant harm and you are somebody that has had to battle difficulties in relation to your mental health but I make it clear there can be no excuse for behaviour like this towards a taxi driver simply trying to do his job.

He added: ‘As far as you’re concerned Miss Whittaker you have managed to confront difficulties in your life much of which is in relation to your previous taking of class A drugs.

‘It is a tragedy to throw away the steps you have made to throw off the curse of drug addiction.’