A power link between France and the UK which was damaged by a fire in September will not be full repaired for two years.

The National Grid dropped the news late last night in an update on its website.

It said that ‘extensive work’ was needed at the site in Sellindge, Kent, which put paid to the previous idea it could be fixed by next March.

Instead the IFA connector will not be fully operational and up to 2000MW capacity until October 2023.

The National Grid’s update said: ‘We have been able to reduce the outage time of 1000MW of capacity at the IFA interconnector so that it will come back to service on October 20, ahead of the October 23 date we had previously published. 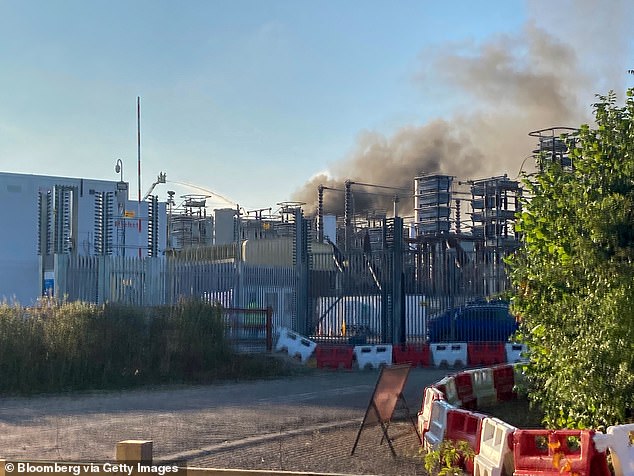 The site in Sellindge, Kent, will not be fully operational for another two years, Grid reports 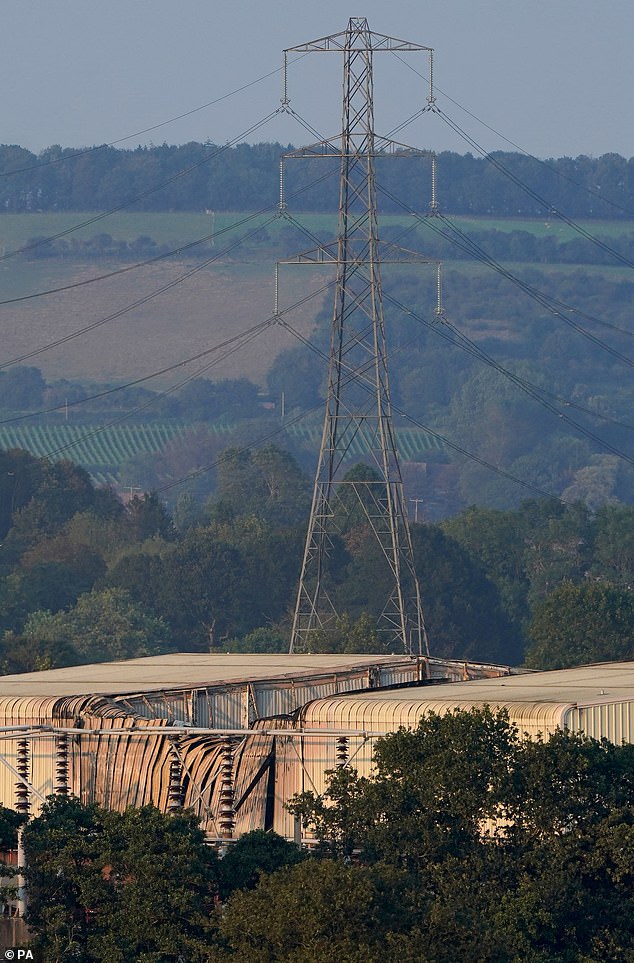 Following a detailed assessment on the 1000MW of capacity that is offline due to damage caused by a fire at our site in Sellindge in September, we need to carry out extensive work to safely return it to service.

‘We will bring 500MW back to service from October 2022 through to May 2023. This will result in 1500MW of available capacity going into next Winter.

‘We will then undertake further work in order to bring the full 2000MW back by October 2023.

‘We are completely focused on getting IFA safely returned to service as soon as possible and ensuring we are able to support security of supply.’

It comes the week after the National Grid warned the supply of electricity to Britain this winter would be ‘tight’. 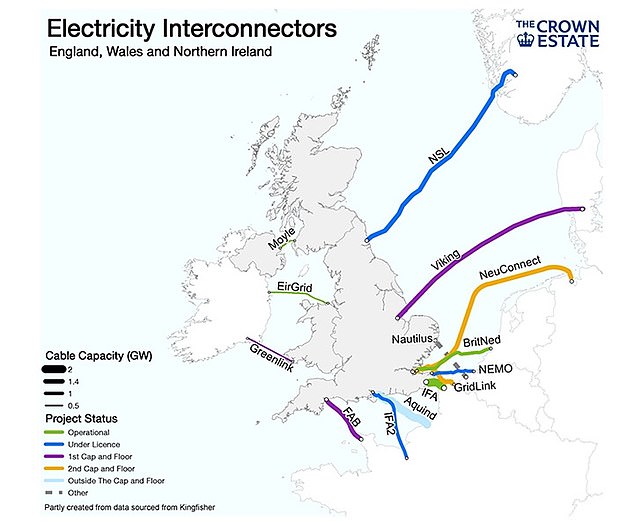 A map showing the various electricity cables that bring in electricity to the UK from the rest of Europe. The IFA link is seen bottom right in green

This graphic shows how electricity is brought in from France via the 1FA link. Converter stations are needed to switch converts direct current to alternating current or the reverse, while the connector links it with the National Grid

The sector faces pressures on profitability and an increased risk of credit negative political intervention, the agency added.

Nine British energy suppliers ceased trading last month alone. Smaller suppliers with less capital are struggling amid record wholesale power and gas prices across Britain and Europe, while price caps prevent the full rises from being passed on to consumers.

Experts believe that if gas prices remain at around this level, which is now predicted, the average household energy bills could jump by as much as a third or £420 to almost £1,700 a year from April. Today the cheapest fixed gas and electricity deal available in the UK is £1,700 – a month ago it was £1,177.

Ofgem will automatically move customers when companies go to the wall. But energy market rules demand that customers whose supplier goes bust must be offered a fair deal by the new supplier – not the same one they had – meaning they are likely to pay significantly more.

‘More (failures) will follow with Renewable Obligation payments due in October,’ Moody’s said.

British ministers are also looking at a range of options to help companies such as National Grid Plc (NG.L), Centrica Plc (CNA.L), EDF (EDF.PA) that have taken on a flood of customers from failed suppliers.

Profitability at those firms will be affected until higher prices are passed on to customers, Moody’s said.

It said on October 7 electricity supplies would come under strain amid the boom in the price of natural gas – which the UK relies on to generate 42% of its power.

Government engineers say Britain has enough energy supply to meet demand and does not believe there will be winter blackouts – but the amount the country will have in reserve at peak times will be the lowest in six years.

The damaged connector station in Kent cuts the amount of energy that can be imported via the 1FA undersea cable – which runs under the English Channel to Calais – by half.

The National Grid said the amount of excess electricity capacity expected above peak energy demand was forecast at 3.9GW for winter this year, or 6.6% of capacity, down from 4.8GW, or 8.3%, last winter.

This forecast is lower than a winter margin forecast of 4.3 GW made in July this year and also the lowest margin level since the winter of 2016/17.

However, Fintan Slye, executive director of ESO – part of the National Grid – insisted the system would manage. ‘We are confident that there will be enough capacity available to keep Britain’s lights on,’ he said.

The British steel industry’s lobby group warned on Monday of an impending crisis due to soaring wholesale energy prices which could force plants into expensive shutdowns, stoke emissions and sow chaos through supply chains.

A shortage of natural gas in Europe had sent prices for electricity and gas soaring, triggering sharp rises in the prices paid by people heating their homes or for major heavy industrial plants smelting steel.

‘These extraordinary electricity prices are leading to smaller or wiped-out profits and thus to less reinvestment,’ UK Steel, which lobbies on behalf of the British steel industry, said in a briefing document.

‘With winter approaching, demand for gas and electricity will rise, and prices could get higher, which will make it impossible to profitably make steel.’

UK Steel said some plants may have to shutter their production ‘for increasingly extended periods with the consequences not only for individual companies but also UK steel supply to the UK economy and UK jobs.’