Teenage neo-Nazi, 18, who wanted to shoot an Asian friend with 3D printed gun over boasts he slept with ‘white chicks’ is found guilty of terror plot

An 18-year-old neo-Nazi who wanted to shoot his Asian friend over boasts he slept with ‘white chicks’ has been found guilty of a terror plot.

Matthew Cronjager, of Ingatestone, Essex, tried to get hold of a 3D printed gun or a sawn-off shotgun to kill his teenage target, who he likened to a ‘cockroach’.

He set up an online library to share right-wing propaganda and explosives making manuals with like-minded people that he had met on the internet, the Old Bailey was told.

Cronjager also set himself up as the ‘boss’ of a right-wing terror cell and wanted a ‘revolution’ based on his fascist beliefs, including hatred of non-white people, Jews and Muslims.

But the extremist didn’t realise he was sharing his plans for a racist revolution with an undercover police officer who had infiltrated a Telegram group called The British Hand, the court was told.

Cronjager, who is on the autistic spectrum, was found guilty of preparing for acts of terrorism and disseminating terrorist publications on Telegram at the Old Bailey on Friday. 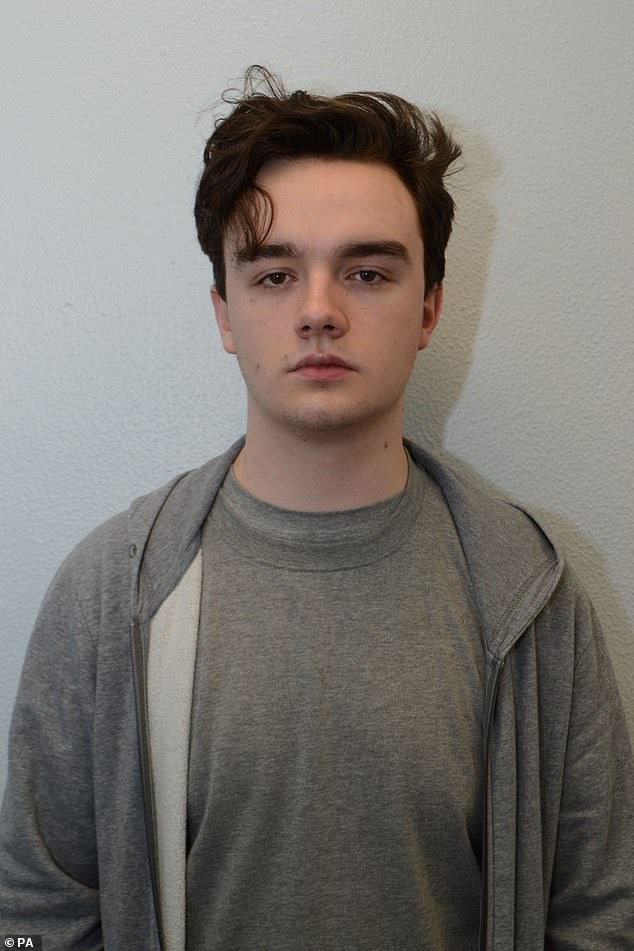 Matthew Cronjager (pictured), 18, of Ingatestone, Essex, tried to get hold of a 3D printed gun or a sawn-off shotgun to kill his teenage target, who he likened to a ‘cockroach’

The teenager denied that he ever meant to do anything and ‘renounced’ his extremist views, saying they were borne out of loneliness and misery.

His lawyer Tim Forte told jurors that Cronjager fell down the internet ‘rabbit hole’ in his bedroom and found a ‘buffet of loathing’ based on misinformation and hatred.

While Cronjager accepted sending ‘vile’ messages, it was claimed on his behalf that in reality he was nothing more than a ‘keyboard warrior’.

Cronjager created for himself a ‘superhero fantasy’ like a Call Of Duty avatar, but it was all ‘make believe’, Mr Forte asserted.

A jury deliberated for three-and-a-half hours to find him guilty of preparing for acts of terrorism and disseminating terrorist publications on Telegram.

The jury had been told Cronjager admitted four charges of possessing terror documents on the first day of his trial.

The court previously heard how the defendant wanted a ‘revolution’ based on his fascist beliefs, including hatred of non-white people, Jews, Muslims and those with a different sexual orientation to his.

He had offered to lead the UK division of an extreme right-wing group calling itself Exiled 393, telling members that his time as an army cadet had given him the necessary skills.

In November last year, Cronjager suggested setting up a collective PayPal account to buy weapons and other items for the group.

In one message, he wrote: ‘I was thinking more of having it to buy things like big tents or a 3D printer maybe for creating bits of ‘art”, said to be code for guns.

Another member of the group said ‘a shipment’ of art would be arriving next year, adding: ‘Whilst printed art is good, art that is actually painted by professionals is always better.’

Cronjager responded: ‘I don’t want to start anything too soon.’

The court was told he said he wanted to arm the group but give them a few months before launching an attack to ‘get over the stress of being illegal and being unable to go back from that point’.

In further messages to the undercover officer on December 13, he and Cronjager discussed arranging a drop off location for 3D printed guns, the court heard, and of the supplier needing more money to pay for materials. 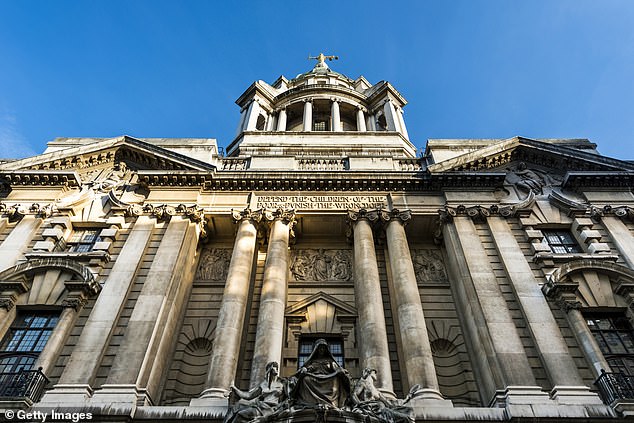 Cronjager wanted a ‘revolution’ based on his fascist beliefs, including hatred of non-white people, Jews and Muslims, the Old Bailey (pictured) was told

Cronjager replied: ‘Once we’ve got them we’re illegal. There’s no real going back.’

He continued: ‘We either go full send it or we p***y out and end up like every other British nationalist group believing we are going to fix this legally.’

On the same day, Cronjager formulated his plot to kill his former friend after he boasted to him of sleeping with three white women, the court heard.

The defendant told the undercover officer: ‘I’ve found someone I want to execute.’

‘I figure we could just ‘find’ a double barrel shotgun and saw it down for things like this.

‘Two blasts will kill all but the strongest man and (there’s) no rifling. So no tracking ballistics.’

The defendant continued: ‘Do you know what’s weird? I was friends with him for ages and I can just kill him like that. I have no hang ups about doing it. He crossed the line.’

When asked if his former friend had raped the girls, he allegedly replied: ‘Nope, but it’s a violation of nature.

‘We’re not supposed to mix race… it’s not rape by legal definition but it’s kind of like rape if that makes sense. Violation at least.’

Cronjager allegedly posted manuals like the ‘KGB Alpha Team Training Manual’ detailing techniques on how to seriously injure and kill and other far right material.

On one group, Cronjager posted, ‘Not sure which kind of racism you’re into but I’ll do all of them’ before signing off with ‘May dreams of Hitler and swastikas guide you to sleep.’

Asked about the death of George Floyd by one user, Cronjager replied: ‘All this stuff about ‘I can’t breeefff’ is complete s***’ and went on to talk about ‘anti-white racism.’

In another group, Cronjager wrote: ‘I’d prefer pure whiteness in our country but if we had to compromise I’d want segregation.’

On his arrest at his Essex home on December 29 last year, police seized a large amount of material demonstrating his commitment to an ‘extreme right-wing cause’, jurors heard.

He attempted to explain his behaviour by claiming to police he was a member of anti-fascist organisation Antifa, that had infiltrated various right-wing groups to disrupt and undermine them. 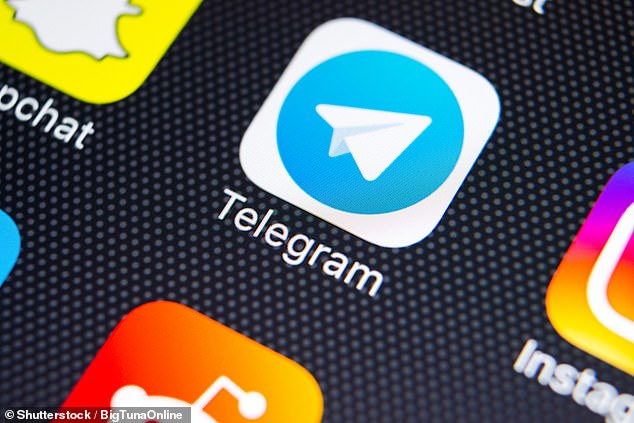 But giving evidence, he accepted he had held extreme far-right views, saying he now felt ‘ashamed and disgusted’ by them.

The defendant, whose hobbies included computer gaming, karate, football and cricket, described his teenage years as lonely, isolated, quite depressed and anxious, with his negative feelings starting around the age of 16.

His lawyer told jurors that Cronjager was ‘curious’ about guns and weapons and his ‘fixation’ became the ‘obsession of a loner’, a miserable, isolated young boy in his bedroom.

Mr Forte said: ‘He was the outsider, he was the other. He retreated in his own mind and that took him down the rabbit hole that is the internet.

‘Children like him 30/40 years ago unhappy, alone, unwelcome, did not have the internet to lure them and ensnare them with misinformation and hatred but today it is all there laid out on a platter like a buffet of loathing.’

Cronjager turned to hate in a ‘spiral of despair’ but not ‘horrendous acts’, the lawyer said.

But prosecutor Alistair Richardson told jurors: ‘What you have here, in the defendant’s interview and you may have felt during his evidence, was pretty close to a full admission of the offences, faced with the overwhelming evidence of his own messaging, his own words.

‘He accepts setting up the library. He accepts that at the time he had neo-Nazi, fascist, far-right views.

‘He accepts he was angry and that made him feel violent. He accepts that at times he wanted to hurt people.

‘He accepts that the guns were to be used for violence. For violent change. In reality, for terrorist attacks.’

The jury was told that the defendant was on the autism disorder spectrum, with a mild level of severity, and had a high IQ.

The defendant, who made no reaction as the verdicts were delivered, was remanded into custody to be sentenced on October 18.