New York: New York Governor Andrew Cuomo said that he was ordering schools in certain New York City neighbourhoods to close within a day in an attempt to halt a flare-up of the coronavirus.

The Governor took the action a day after the city's mayor, Bill de Blasio, asked the state for permission to reinstate restrictions on businesses and schools in nine postcodes in Brooklyn and Queens where the virus was spreading more quickly. 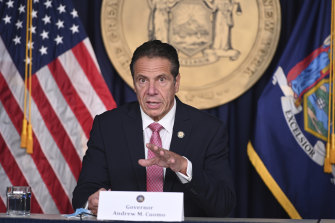 Cuomo said the closures would take place by Tuesday, a day ahead of when the mayor wanted.

"These clusters have to be attacked," Cuomo said, likening the state to a field of dry grass ready to ignite if burning embers aren't put out fast.

He said schools in the areas where the virus was spreading hadn't been doing enough testing of students and staff to identify possible outbreaks and he could no longer guarantee they were safe.

Cuomo said he consulted by phone shortly before the news conference with Mayor de Blasio, the city comptroller, city council speaker and the head of the city's teachers' union.

The Mayor's plan, which required state approval, would close about 100 public schools and 200 private schools including religious schools.

As outlined by the Mayor, it would also shutter non-essential businesses and force restaurants to go back to offering takeout, just a week after they were cleared to begin welcoming diners back indoors.

Most of the neighbourhoods targeted by the restrictions are home to part of the city's large Orthodox Jewish community, where many religious schools resumed in-person instruction in early September.

De Blasio had aimed his request at neighbourhoods where the percentage of people who have taken a COVID-19 test, and who have tested positive, has topped 3 per cent for at least seven days in a row.

The city's plan would allow religious institutions to keep offering group services, but Cuomo suggested that he would be willing to shut down temples and churches, too, if they aren't following the rules.

"If you do not agree to follow the rules, then we will close the institutions down. I am prepared to do that," Cuomo said.

Roman Catholic officials pushed back against the shutdown plan on Monday, saying that rather than close all schools in the neighbourhoods, the city and state should target only those that have seen a spike in infections.

The seven Catholic schools that would be affected have also been in school since the start of September, and have not seen a virus flare-up, church officials said.

"Should our schools be ordered closed by the state absent any significant COVID-19 outbreaks because of inferior protocols at non-Catholic schools, it would be a profound injustice to our families who have placed their trust in us to keep their children safe and whose faith has been richly rewarded to date," officials with the New York State Catholic Conference said in a statement.