War of BBC’s big beasts! Nick Robinson grills Cabinet Ministers for breakfast on Radio 4… but now he’s feeling the heat himself as he faces competition from sharp-elbowed rival Amol Rajan

For more than six decades, Radio 4’s Today has been the BBC’s flagship morning current affairs programme, framing the daily news agenda and making household names out of its stable of four regular presenters.

But now those familiar on-air voices have become what one insider describes as ‘a cauldron of egos’ following the announcement that Mishal Husain, Justin Webb, Martha Kearney and Nick Robinson are being joined on the rota by Amol Rajan, a fast-rising star dubbed ‘Amol Nitrate’ because of his irrepressible nature.

Robinson has objected to the changes, telling managers that the ‘optics’ of appointing a fifth presenter at a time of budget cuts to programmes look bad for the Corporation.

Insiders claim that Robinson, 57, a former BBC Political Editor, regarded himself as having inherited John Humphrys’ status as Today’s effective lead presenter, and was struggling to accept the idea that he should have equal billing with three – and now four – others on the programme. 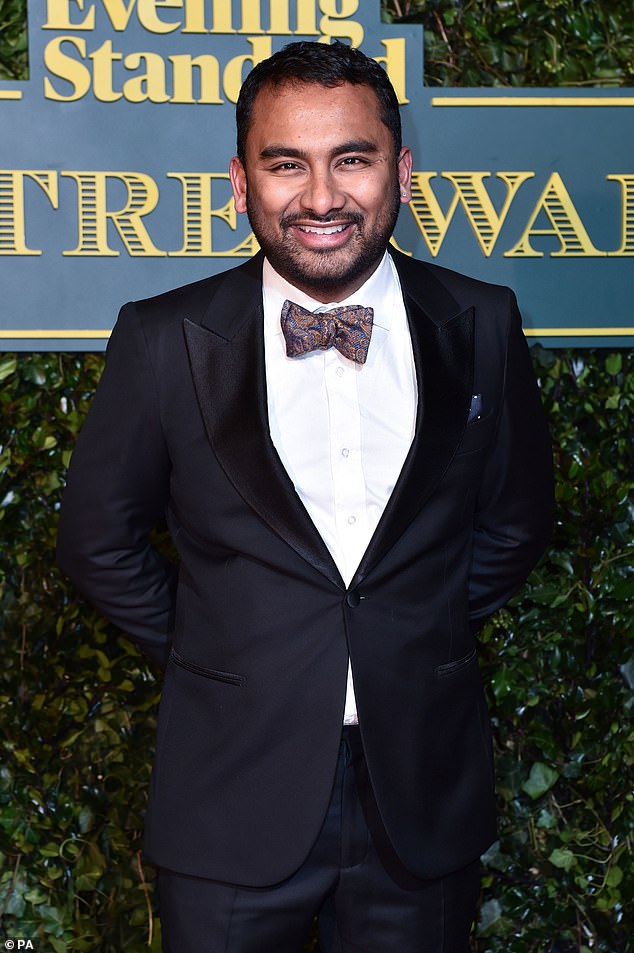 Mishal Husain, Justin Webb, Martha Kearney and Nick Robinson are being joined on the rota by Amol Rajan (pictured), a fast-rising star dubbed ‘Amol Nitrate’ because of his irrepressible nature

A source said: ‘Nick is a terrific journalist, but he would also be the first to agree with that assessment. It is becoming a cauldron of egos.

‘Robbo’s rage over Amol’s arrival is the talk of the station. Will they present the programme together? If so, which of them will get the marquee 8.10am interview?’

A friend said Robinson regarded Rajan as a ‘brilliant broadcaster’ who would flourish on the programme, but he ‘didn’t think the optics of appearing to appoint a fifth presenter were great at time when they are announcing cuts’.

The friend added that Robinson thought the current system of allowing senior broadcasters, such as North America Editor Jon Sopel, to fill gaps in the rota should be maintained.

The changes are part of a wider shake-up by BBC Director-General Tim Davie, who unveiled plans last week to ‘better reflect’ all parts of the UK by making more programmes outside of London.

As part of its ‘biggest transformation in decades’, news and current affairs programmes will be presented from different UK bases, with Today co-hosted from outside London for at least 100 episodes a year.

The friend of Robinson added: ‘A lot of BBC people are worrying about whether they are going to lose their job, or will have to leave London. It’s not a great time to say they are appointing an extra presenter.’

Rajan, 37, was born in Calcutta but raised and state-educated in Tooting, South London. He studied at Cambridge University, then blazed a trail through the media in his 20s. 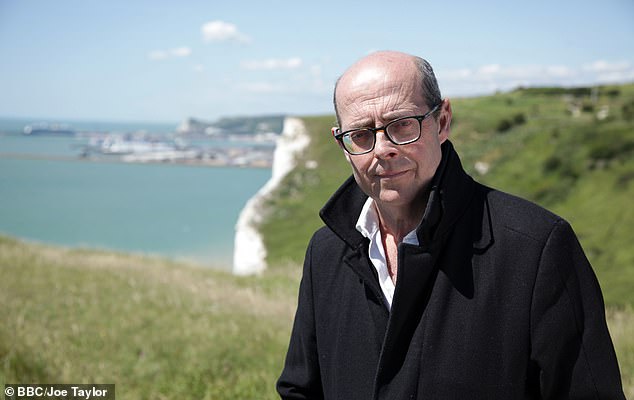 Insiders claim that Robinson, 57, (pitured) a former BBC Political Editor, regarded himself as having inherited John Humphrys’ status as Today’s effective lead presenter, and was struggling to accept the idea that he should have equal billing with three – and now four – others on the programme

He became Editor of The Independent before turning 30 and moved into broadcasting in 2016 when he was appointed the BBC’s first Media Editor. It is understood that his Today promotion will lift his pay to a minimum of £250,000.

Another BBC source was sympathetic to Robinson, accusing Rajan of using ‘sharp elbows’ to climb the corporate ladder and saying: ‘The BBC’s management is dazzled by Rajan, and seem to think that every big job has to go to him.

‘His magnificent vanity is tied up in a grotesque false modesty, allied to an acute understanding of power plays – see how he has used his stints on Radio 4’s The Media Show to shamelessly ingratiate himself with the bigwigs.

‘Nick was once the pushy one, expecting the doors to open to him all the way to the BBC director-generalship. He thought he would become Today’s No 1 presenter when Humphrys left, but now he has found this cuckoo in his nest.

‘He feels he is being supplanted by someone who boasts – as someone 20 years younger – of his understanding of how class and the social bubble works in the modern age.’

Robinson, who had an operation to treat lung cancer six years ago, had wanted to present the Today programme since childhood: his best friend at school was Will Redhead, son of late Today presenter Brian. 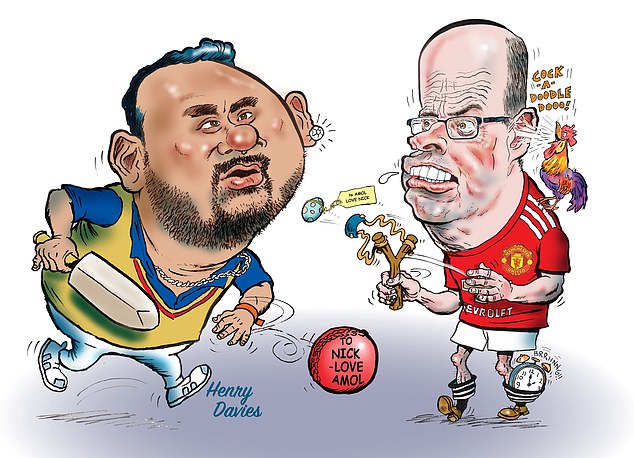 His desire to inherit Brian Redhead’s mantle was made even more powerful at the age of 18, when he was in a car crash in France with Will and another friend in which the two other boys died. Robinson was so badly burned he had to defer his place at Oxford until he had recovered.

Some of Robinson’s colleagues claim that the BBC’s Westminster operation ‘breathed a sigh of relief’ when he handed over the political editorship to Laura Kuenssberg.

One said: ‘The atmosphere lifted overnight: Laura is just as professional as Nick, but much more collegiate.’ But others are complimentary about Manchester United fan Robinson. One said: ‘He was the first presenter to volunteer to go on the road – jokingly offering to specify dates after the United fixture list was printed.’

Colleagues of Rajan say he is more sensitive than he sometimes appears from his ‘self-aggrandising’ social media output, adding that he was stung by radio critic Gillian Reynolds recently describing him as ‘omnipresent’ and asking: ‘Does the BBC think there is no limit to this chap’s talents?’

In an email to his new colleagues on Today last week, Rajan told them: ‘I’ve a huge amount to earn, obviously’, before correcting the ‘great Freudian slip’. He said: ‘This is what sleep deprivation does to you – and I haven’t done a shift yet.’

BACKGROUND: Amol Varadarajan moved from India to England at the age of three, when his family shortened their surname to Rajan.

MARITAL STATUS:  Married to Charlotte Faircloth, an Associate Professor at UCL’s Social Research Institute. They met at Cambridge University where she got a PhD in social anthropology. Her books include Militant Lactivism? Intensive Motherhood And Attachment Parenting In The UK And France. They live in London with son Winston and daughter Jamaica.

EDUCATION: Graveney School, Tooting, South London, where he enjoyed physics. Worked at the Foreign Office during his gap-year before studying English at Downing College, Cambridge.

JOB TITLE: As well as the Today programme’s new presenter, he is the BBC’s Media Editor, makes BBC2 documentaries, is a stand-in host on The One Show, Radio 2 morning shows, and a Masterchef judge. Has also appeared on Newsnight, Question Time, This Week, BBC Breakfast, Celebrity Mastermind – and even Antiques Roadshow.

NICKNAME: Amol Nitrate – colleagues say he has the ‘sharpest elbows in Broadcasting House’.

CAREER: Before joining the BBC in 2016, he was in newspapers – and as Editor of The Independent at the age of 29, he was the UK’s first non-white press editor.

HINTERLAND: Cricket. Wrote a history of spin bowling, titled Twirlymen. Loves reggae (which he ‘DJs badly but with enthusiasm’).

APPEARANCE: More laid-back than a collapsed deckchair. His ear-stud and tie seem to be put on and removed depending on what type of show he’s presenting.

BACKGROUND: His translator mother was the child of German Jews and she was brought up in the Far East. She came to England to get married – to Robinson’s father, a sales director for a metal firm.

MARITAL STATUS: Met wife-to-be Pippa at Oxford. He recalls: ‘She was in a state of some disarray at the end of a party! Either I was gallant or lustful – I rescued her.’

They have two homes: one in Highbury, North London, and a bolthole on the Suffolk coast where he ruffled feathers by saying he contemplated ‘murdering’ a neighbour’s noisy cockerel. The couple have a daughter and two sons in their teens – and a cockapoo, Sam.

EDUCATION: The private Cheadle Hulme School, Stockport (having been born in Macclesfield) and then University College, Oxford, where (like so many Westminster wonks) he read philosophy, politics and economics.

NICKNAME: Blue Robbo – because he was president of the Oxford University Conservative Association.

CAREER: First job was at Procter and Gamble, where he was asked to market nappies. ‘I could have been the brand manager for Pampers nappies!’ Joined the BBC in 1986 and worked on many programmes, including as Deputy Editor of Panorama. Poached by ITV to be Political Editor – then returned to the BBC in 2005.

HINTERLAND: Scant hobby-time for this self-confessed ‘political junkie’ but a Manchester United superfan and enjoys classical concerts at Snape Maltings in Suffolk.

APPEARANCE: All-man – with female colleagues complaining about his ‘mansplaining habits’. Has recently adopted a folksy interviewing technique with anyone from north of Stevenage, redolent of his broadcasting hero Brian Redhead.