‘Not sustainable’: Dozens of COVID-19 patients missing from ICU figures

Dozens of COVID-19 patients in Victoria’s intensive care units are missing from official figures, as the state’s health department fails to publicly report those who are lingering in hospital, including some of the most gravely ill.

The revelation indicates the pressure on Victoria’s strained hospital system is significantly worse than previously thought and discredits widely reported government statistics that suggested ICU admissions due to COVID-19 cases have been slowly falling since mid-October from a high of 163. 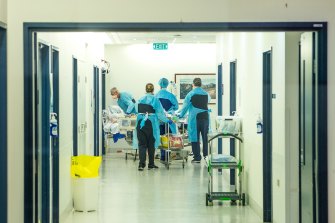 Hospital data obtained by The Age indicates admissions have, in fact, been hovering at about 190 patients, taking up close to 40 per cent of the state’s normal ICU capacity. Those figures have only started falling slightly in recent days.

One senior intensive care physician has expressed frustration that Victoria’s daily ICU numbers were continually being misrepresented by the government, describing the state’s intensive care system as “so close to a crisis, it’s not funny”.

A person in Victoria is typically declared “COVID cleared” if they have been in hospital for 20 days and they no longer need to be placed in an isolation ward.

Patients who are no longer considered infectious with the virus are not counted in official figures, despite them sometimes needing weeks of additional ongoing care in intensive care units and occupying a bed that may be needed for a stroke, heart attack, cancer, emergency surgery or trauma patient.

The Age on Thursday viewed data from the federal Critical Health Resource Information System, which showed there were currently 181 coronavirus patients in Victorian ICU beds – 67 more patients and almost 63 per centhigher than the 114 publicly reported by the state’s Health Department.

Of these 181 patients, 115 patients had been deemed infectious and 66 had been declared ‘COVID cleared’.

Victoria reported 1247 new locally acquired COVID-19 cases on Thursday and nine deaths. Those numbers follow two days below 1000 cases, but health authorities are anticipating a spike in infections after the latest easing of restrictions last week.

The way Victoria reports intensive care capacity is in contrast with NSW which publicly reports every ICU patient, regardless of whether they are deemed infectious, in its daily numbers.

His view was that every person admitted to ICU due to COVID-19 should be counted and reported.

“COVID patients still pose a significant challenge and remain a demand on resources long after they are no longer infectious,” he said. “They still might continue to require ventilation, they still might require renal support.” 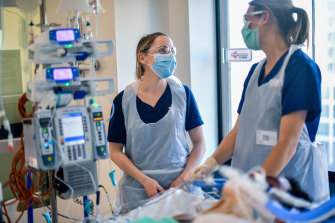 Even when out of ICU, COVID patients can place a significant demand on hospital resources. Credit:Joe Armao

The senior intensive care physician, who spoke to The Age on the condition of anonymity as he was not authorised to speak publicly, said despite a decline being reported in the official daily hospital numbers last month, the true number of COVID-19 patients in ICU had been hovering near 190 every day for weeks.

“You’ve got a system in Victoria that’s so close to being overwhelmed it has just skated by over the last few weeks,” the doctor, who works at a large Melbourne hospital, said.

“It is just not sustainable.

“We are much busier than Sydney was as a proportion of ICU beds at their peak in the outbreak because they’ve got double the number of staffed beds. The pressure in Victoria is dramatically different.”

Most recent figures show Victoria currently has 488 staffed ICU beds opened, compared to NSW’s 923 staffed beds. A staffed bed refers to an ICU bed in a hospital with enough staff rostered on to provide critical care to the patient. The current best practice is one ICU nurse per patient.

Dr Holley said while he did not believe there was any deliberate intention by the Victorian government to mislead the public, the administrative discrepancies between states highlighted the need for a nationally consistent standard on how coronavirus cases in ICUs were recorded.

“It would be very preferential at a national level that we are unified in our reporting, so there is no confusion,” he said.

“This is consistent with reporting COVID-19 in the community,” he said, adding the number of people in ICU – infectious with COVID-19 or otherwise – is monitored closely and factored into hospital planning.

NSW Health confirmed that the state publicly reports all the patients who had been admitted to hospital with COVID-19, not just those still considered infectious.

This means information reported by the federal health department comparing intensive care admissions between the states in the latest coronavirus outbreak has been continually using inconsistent information.

The federal health department indicated it was aware of the issue. A spokeswoman said the department was working with states and territories to record the “cleared” COVID-19 cases.

There are currently 64 people in the NSW’s intensive care units, including 31 requiring ventilation.

Hospital data from Thursday showed ICU units at Melbourne’s major tertiary hospitals including the Royal Melbourne Hospital, The Alfred, the Austin, St Vincent’s and Monash Medical Centre, were running at 95.2 per cent ICU occupancy, down from 98 percent on Wednesday.

This compares to NSW, which was hovering at 75.5 per cent occupancy in its major tertiary ICU units on Thursday.

In recent weeks, Victoria has reached 96 per cent ICU capacity statewide, while the paediatric ICU unit at the Royal Children’s Hospital was operating beyond its capacity last week, at 112 per cent. 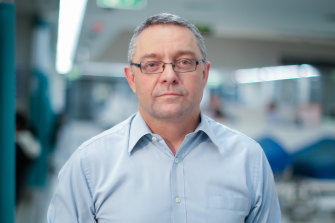 Professor David Pilcher says the public could have a false impression about the workload generated by COVID-19 patients.Credit:Simon Schluter

He said it initially didn’t make much of a difference to the official count because most patients last year were typically treated as infectious as it wasn’t obvious when they could be safely considered cleared of the virus.

Earlier this week, Professor Pilcher confirmed there were more than 60 patients who were in Victorian intensive care units due to COVID-19 who weren’t included in the “active” figures, including many of the most seriously ill, placed on a heart and lung machine.

The researcher was concerned the public would have a false impression about the workload being created by COVID-19 patients, especially when these dozens of beds might be needed due to demand created by Victorians needing beds after critical surgery or after accidents during the festive season.

However, Professor Pilcher said he didn’t believe there was “malicious intent” on behalf of the Victorian Health Department in its reporting of the COVID-related intensive care admissions – rather it had just become hard to change.

The discrepancies in the reporting of ICU admission come amid concerning findings of a major national study, which found a staffing shortfall could lead to substandard levels of care in ICUs throughout Australia if the number of COVID-19 patients surges in the coming months.

The study found fewer than half the potential additional ICU beds could be staffed under present employment levels while maintaining pre-pandemic levels of care and suggested more needed to be done to recruit and retrain health staff.

Victoria changed the way it reported vaccination data on Thursday.

From now on, instead of sharing the vaccination rate of people aged 16 and above in the daily COVID update, authorities will provide the percentage of immunised Victorians aged 12 and over.

To date, 81 per cent of Victorians aged 12 and above have been fully vaccinated and 92.2 per cent have received their first dose of the vaccine.

There are now 17, 674 active coronavirus cases in the state.

Premier Daniel Andrews said on Thursday he hoped the federal government would be making an announcement “quite soon” about vaccinating five to 11-year-olds, preferably before the end of the school year.

The issue will be on the agenda at Friday’s national cabinet meeting.

C, Dozens, not, of, sustainable
Celebrities