Novak Djokovic has been drawn against fellow Serb Miomir Kecmanovic in the Australian Open despite no decision being made over whether he is allowed to compete.

The men’s tennis number one had his visa cancelled on arrival in Melbourne last week when his COVID-19 vaccination exemption was questioned.

But he won a court appeal against the cancellation that allowed him to remain in the country.

The Australian government is still looking at whether he can stay – a decision that is entirely at the discretion of Australia’s Immigration Minister Alex Hawke.

Despite this, the Australian Open, which begins on Monday, has continued to include him in the line-up after naming him as the top seed.

The draw, to determine the men’s and women’s singles brackets at the year’s first tennis major, was scheduled to be held at 3pm local time in Melbourne but was delayed.

Who will play who?

In the draw, Rafael Nadal was placed in the same half as Djokovic, meaning they could meet in the semi-finals.

World number three Alexander Zverev was also in the top half, with second seed and US Open champion Daniil Medvedev in the bottom half. Andy Murray’s return will come against 21st seed Nikoloz Basilashvili, who he beat in Sydney on Wednesday. 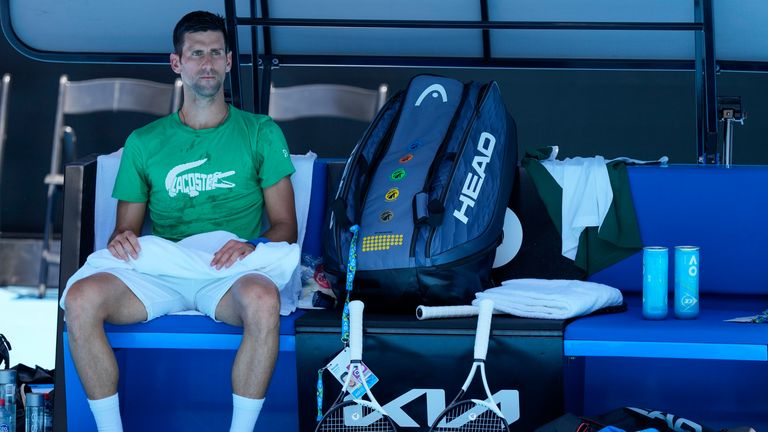 This morning, Djokovic has been out practising on Rod Laver Arena inside Melbourne Park, the venue for the Australian Open.

Pictures in recent days have shown him on the court surrounded by members of his team.

It comes after he admitted his agent made a mistake on his entry form to Australia when providing details of his travel in the days before his arrival in the country.

In a lengthy statement, he also apologised for meeting with a French journalist for a face-to-face interview and a photoshoot after testing positive for COVID-19.