A 49-year-old NSW man has been charged after allegedly importing 320 kilograms of cocaine into Western Australia by boat.

The Australian Federal Police said the man was helped by a 37-year-old German man with suspected links to organised crime who had flown to Australia this month. 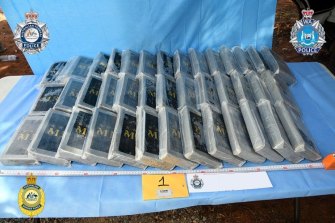 WA Police say that about 320 kilograms of cocaine was seized after a NSW man was arrested and charged in the Pilbara region of Western Australia. Credit:Australian Federal Police

Police allege the pair hired a 6.5-metre boat to collect the cocaine from the ocean off Port Hedland, a mining town in the Pilbara region.

As they were seen lingering close to an international bulk shipping carrier, police suspect the ship was used to import the drugs into Australian waters from overseas.

The Western Australia Police Force tactical response group boarded the ship, which was then searched by members of the Australian Border Force, Australian Federal Police and WA Police.

The NSW man was arrested in a campervan in Port Hedland on Sunday. He was allegedly found with $128 million of cocaine wrapped in plastic in 320 individual blocks.

“This amount of cocaine could have been sold to about 320,000 Australians … if broken down into one-gram-street-level deals and put about $128 million into the pockets of the criminals involved in its distribution,” AFP acting Commissioner John Tanti said.

Both men have been charged with importing cocaine.

WA Police are due to provide more details on Tuesday afternoon.

In a separate case last week, a scuba diver died after a drug drop went wrong in Newcastle. NSW Police found more than $20 million worth of cocaine in water nearby after the man washed up on the Hunter River.

NSW Police believe more than 50 kilograms of cocaine entered the Newcastle community and released images of a man and a woman to whom they wish to speak and who may have fled the country.