Wellington: After eight years and thirty rounds of negotiations, the New Zealand government has put pen to paper on what has been called the world’s largest free-trade agreement.

The deal offers some New Zealand goods faster access to Chinese markets and a reduction in tariffs for paper and wood products.

Trade Minister Damien O’Connor and China’s Commerce Minister Wang Wentao inked the deal in a video-link meeting on Tuesday afternoon, more than a year after it was first settled by the countries. 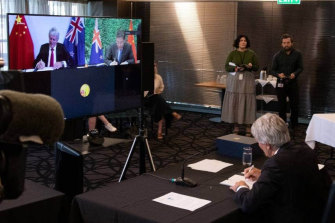 Signing the paperwork in the Beehive in Wellington, O’Connor said the upgrade meant the deal was suitable for another decade. New Zealand was the first developed country to sign a free trade agreement with China, in 2008.

“What this does is modernise the free trade agreement that we signed in 2008, brings it up to date. It provides real opportunities for exporters,” O’Connor said.

“Ten years ago, some of the issues around trade were not as sophisticated, this agreement allows us to move forward, particularly in the area of services.”

New Zealand will have 98 per cent free trade with China, its largest trading partner, once the agreement comes fully into force. The upgrade has primarily focused on reducing compliance costs for exporters, and other measures which ease access to China’s markets. 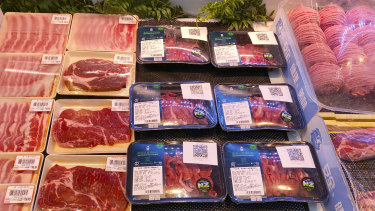 Beef products from New Zealand with a QR-code linked to packaged goods coronavirus test results are displayed at a supermarket in Beijing.Credit:AP

At the Chinese border, there will be an expedited six-hour “clearance time” for perishable goods, such as seafood. Exporters will have key staff they can contact at Chinese ports to iron out any issues. More visas for Chinese tour guides will be provided, and fewer visas will be provided to traditional medicine practitioners.

“These are technical issues that we’ve tied up through the upgrade and will give more security and certainty to all our exporters,” O’Connor said.

Under the upgraded agreement, 99 per cent of New Zealand’s $NZ3 billion ($2.8 billion) trade in paper and wood products will gain tariff-free, preferential access to China. An additional 12 wood and paper products will have duties removed – the expected value of this change is $NZ36 million.

Wood products have been a major export to China. Of the $NZ6.4 billion in wood exports in 2018, 48 per cent headed to China.

There has been no change to the deadline for removing tariffs on dairy products under the existing agreement. Most dairy products will be tariff-free in a year’s time, and milk powder by 2024.

“It upholds environmental standards and doesn’t allow any of those to be reduced for trade advantage,” O’Connor said. 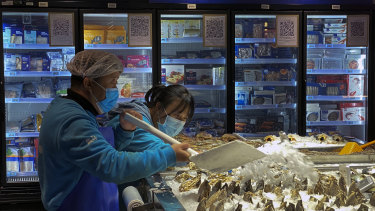 Workers shovel ice onto imported seafood at a Beijing supermarket.Credit:AP

He said China would receive access to a market of highly desirable products through the upgrade. Rules for Chinese investors in New Zealand would not change in light of the agreement.

New Zealand’s Parliament will now consider and ratify the deal before it comes into force.

Wang, speaking through an interpreter, said the deal was “another milestone” in co-operation between the countries.

“I’ll be more than happy to maintain working relations with you; jointly break new ground in trade and economic relations between China and New Zealand,” he said.

Prime Minister Jacinda Ardern met with Chinese Premier Li Keqiang at the East Asia Summit in Bangkok in 2019, when the conclusion of three years of negotiations over the upgrade was announced.

The signing was celebrated by business and forestry groups. ExportNZ executive director Catherine Beard said the agreement would be met with a “sigh of relief by some exporters”.

“This will bring huge benefits to our exporters of perishable goods like seafood, dairy, the forestry sector and other primary sector industries.”

New Zealand International Business Forum chair Philip Gregan said: “It shows that trade liberalisation is still possible even in the midst of a global pandemic and that New Zealand and China can pursue a mutually beneficial economic relationship despite the differences between us”.

New Zealand has a trade surplus with China, exporting $NZ19.4 billion in goods and services to the country, and importing $NZ13 billion.