Thailand's monarchy is about to be targeted in an extraordinary show of defiance by Bangkok anti-royalists, who are taking their protests to the Ladawan Palace, a sprawling 19th-century Italianate mansion in the Dusit parliamentary district that houses the Thai King's Crown Property Bureau.

The bureau manages the royal patriarch's extraordinary personal wealth, reputed to include assets valued at between $US30 billion and $US46 billion ($42-$63 billion), some of it tax-free. 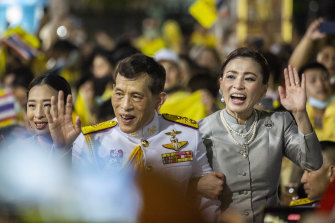 These holdings make him the richest monarch in the world, according to CEOWorld magazine last year.

But Human Rights Watch Asia director Brad Adams said protesters had likely turned their attention on the Crown Property Bureau because "they quite clearly believe the monarchy is behind the system here … and there is a real lack of transparency".

"The protesters have continued to raise concerns about the amount of money the monarchy takes from the government purse. They have been chanting 'our taxes' – that relates to the Crown Property Bureau."

These protests could be a flash point, Adams warns. "This is a very serious situation. Thailand is sliding towards the precipice."

The king's investments through the bureau include stakes in the Siam Commercial Bank, Siam Cement, about 8400 hectares of land in central Bangkok and ownership of about 40,000 rental properties including shopping centres, hotels and markets across the country, including 17,000 in Bangkok.

The current King, Maha Vajiralongkorn, took personal charge of the holdings in 2017, soon after succeeding his father.

Maha is not esteemed as his long-ruling father King Bhumibol Adulyadej was and has been personally criticised by the protesters during the current demonstrations, often in ways many Thais consider genuinely offensive.

The nation's long-feared lese-majesty laws, which forbid any insult to the royal family, have not proved a deterrent.

In preparation for the protests, police have installed razor wire around the Crown Property Bureau offices.

Nearly 6,000 police officers will be dispatched to guard the offices on Wednesday and no protesters will be allowed within 150 metres of the bureau, where royalists have also said they plan to gather.

Piya Tavichai, the deputy head of Bangkok police, said the two groups would be kept apart.

"Depending on how protesters behave, we will take appropriate measures," he told a news conference.

The protesters have three key demands: the removal of former junta leader Prayut Chan-o-cha as Prime Minister; a new constitution, as the current document heavily favours the incumbent; and reforms to the monarchy.

On Tuesday, Prayut rejected suggestions there could be another military coup – the country has endured several, most recently in 2006 and 2014 – and he also ruled out imposing martial law, according to the Bangkok Post.

Adams said the organisation was increasingly concerned about the use of force against the protesters, many of whom are university and school students from the increasingly affluent Bangkok middle class.

"We are concerned that we will see a repeat of the November 17 protest, when water cannons and tear gas were used and we believe pepper spray, a stinging agent," he said.

"Because the government is not respecting human rights, not allowing them to express their views, we are heading towards a greater confrontation and a greater use of violence."

A spokesperson for United Nations Secretary-General António Guterres last week expressed concern about the situation in Thailand and described the use of non-lethal weapons as disturbing.

Australian National University Thailand expert Professor Greg Raymond said the protest targeting the Crown Property Bureau was "unprecedented", but only the latest "in a series of unprecedented events" in 2020 including the call to reform the monarchy.

"I think there is an increasing level of frustration amongst the protesters and there is disappointment that Parliament won't give consideration to the constitutional amendments [proposed by the protesters]".

The Royal Palace has made no comment since the protests began in July. When asked about the protesters earlier this month, the king said "we love them all the same" and described Thailand as a "land of compromise".