On course for defeat: Trump played golf as results were called

When a sweep of media outlets declared that Democrat Joe Biden had won the election, US President Donald Trump was playing a round at his golf course.

Trump was photographed leaving the White House wearing a golf shirt and white cap emblazoned with 'Make America Great Again' and '45' just after 10am local time (2am AEDT).

From the fairways of the golf club he owns in Sterling, Virgina, Trump falsely tweeted that he'd won "by a lot". 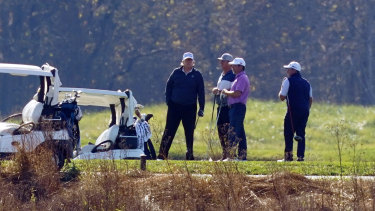 President Donald Trump at the Trump National Golf Course in Sterling, Virginia as the election was called for Joe Biden. Credit:AP/Patrick Semansky

He later issued a statement which did not include a concession and continued to claim, without evidence, that the election was fraudulent.

"We all know why Joe Biden is rushing to falsely pose as the winner, and why his media allies are trying so hard to help him: they don't want the truth to be exposed," Trump said.

"The simple fact is this election is far from over … Legal votes decide who is president, not the news media."

It is unknown whether Trump won his round of golf.

Several hundred people gathered outside the golf course, including dozens of Biden supporters celebrating the Democrat's win, singing, "Hey hey hey, goodbye". They also chanted "Lock him up!" – a chant also frequently heard at Trump rallies, directed at his rivals.

There were also dozens of Trump supporters, many waving large Trump flags and chanting: "We love Trump!"

A convoy of trucks covered with pro-Trump and American flags was driving up and down the street, with one driver jeering at the gathered press.

In a strange twist of fate, vice-president-elect Kamala Harris appears to have also been out exercising when the election was declared by major US media outlets. 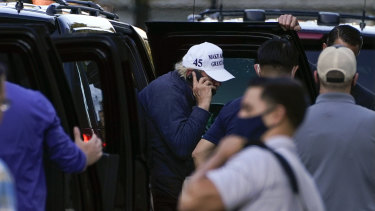 Trump was speaking on a phone as he got out of his vehicle on return to the White House.Credit:AP

Trump has so far refused to concede to Biden and is promising further legal challenges. He is the first president to lose reelection since George H.W. Bush in 1992.