‘On your side’: As repression deepens, Johnson meets exiled Belarusian leader

London: Boris Johnson has told the people of Belarus that Britain is “very much on their side” during talks with the country’s exiled opposition leader Sviatlana Tsikhanouskaya at Downing Street

Tsikhanouskaya said that during their 25-minute talk she had raised the death of prominent Belarusian activist Vitaly Shishov who was found dead in Ukraine, as well as the defection of Olympic sprinter Krystsina Tsimanouskaya to Poland after she was ordered home for criticising the son of authoritarian President Alexander Lukashenko. 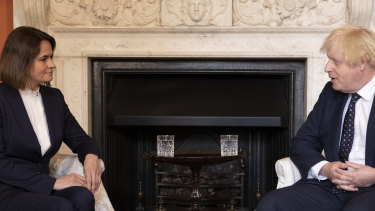 Vitaly Shishov, who ran an organisation helping Belarusians fleeing persecution into neighbouring Ukraine was found hanged from a tree in a park in Kiev, not far from his home.

He had failed to return home from a jog. Police in Ukraine said in a statement that his mobile phone and personal belongings were removed from the scene. Authorities are investigating his death including the scenario that it was a “murder disguised as suicide.”

His colleagues at the NGO Belarusian House Ukraine, said Shishov had complained of being under surveillance since fleeing Belarus last year when he took part in anti-government protests.

Christo Grozev, a lead investigator at Bellingcat said they had already had a reporter on the ground in Kiev gathering data to uncover the truth.

“We have dedicated resources and have a reporter on the ground in Kiev gathering data as we speak,” he told The Sydney Morning Herald and The Age.

“We are very much on your side, very much supportive of what you are doing,” Johnson told Tsikhanouskaya.

“We are committed to supporting human rights and civil society in Belarus,” he said.

Outside Number 10, Tsikhanouskaya said she was “sure” the UK would offer concrete help for the people of Belarus. Earlier, she said on her Telegram channel that the events of the last weeks and months had shown that “Belarusians cannot be safe, even abroad.”

The plight of the Belarusian people shot to prominence this week when sprinter Krystsina Tsimanouskaya sought asylum in Tokyo, claiming she feared jail after criticising Victor Lukashenko, the president of the Belarus National Olympic Committee and son of the President.

She said she was visited by two team officials who were ready to escort her to the airport and ordered her to fly home to Minsk. She refused and sought refuge at the Polish Embassy in Tokyo.

Poland has granted her a humanitarian visa.

Deputy foreign minister Marcin Przydacz said: “It was against her will, so it was quite natural for us to help her.”

“She can come to Poland and she is planning to do so,” he said.

Tsikhanouskaya says she won last August’s elections in Belarus against Lukashenko who was proclaimed the victor in an outcome plagued with allegations of electoral fraud and one that is not recognised by major countries, including the UK.

The election sparked the largest anti-government protests in Belarus’ history which were met with repression by Lukashenko, who Britain and Canada sanctioned last year.

The EU and US joined the pair in announcing more sanctions this June after the Lukashenko regime unlawfully diverted a Ryanair flight in May to detain journalist Raman Pratasevich.

Tsikhanouskaya fled to Lithuania where she lives in exile. She is currently on a tour to drum up Western support for her people. Last week she visited US President Joe Biden who said he was “honoured” to host the pro-democracy leader at the White House.

as, On, repression, Side, Your
Celebrities