Only 40% of French population say they want to take coronavirus vaccine as deaths soar across Europe including 1,000 a day in Germany and a new high of 205 in Sweden

Less than half of the French population say they want to take the coronavirus vaccine, a new poll has found.

It comes as Covid-19 deaths soar across Europe including 1,000 a day in Germany and a new high of 205 in Sweden.

Just 40 per cent of people in France want to have the vaccination, according to the poll by Ipsos Global Advisor in partnership with the World Economic Forum, which came out on Tuesday.

That puts France behind other laggards like Russia on 43 per cent and South Africa on 53 per cent and far from countries where eagerness to take the vaccine is high such as China on 80 per cent and the UK on 77 per cent.

Fear of potential side effects is the reason most often given for not wanting the vaccine, according to the poll.

In the United States, where a mass vaccination campaign has now begun in earnest, 69 percent of people now want the vaccine, a rise on October’s figures.

France began its vaccination campaign on Sunday along with most of the rest of the EU, targeting residents in care homes first.

However fewer than 100 people were immunised in the first three days in France, a far slower pace than in neighbouring Germany, let alone in the US or UK. 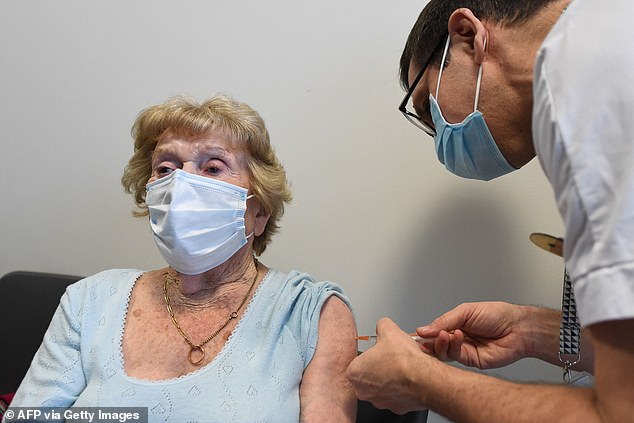 Less than half of the French population say they want to take the coronavirus vaccine, a new poll has found, with fears of potential side effects being the main reason behind peoples’ reluctance. Pictured: A retirement resident in Loos, northern France, received the vaccine on December 28 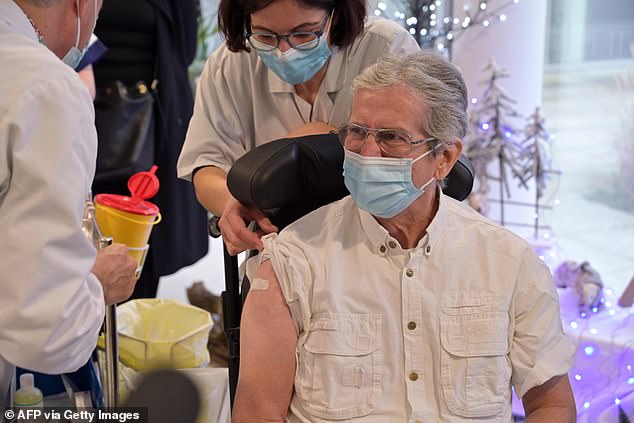 Fewer than 100 people were immunised in the first three days in France, a far slower pace than in neighbouring Germany, let alone in the US or UK, however a health ministry official rebuffed criticism in a social media post saying: ‘We have not set out for a 100-metre sprint but a marathon’. Pictured: Jacques Collineau, 75, receives a dose of the Pfizer-BioNTech vaccine at a nursing home near Tours, France on December 28 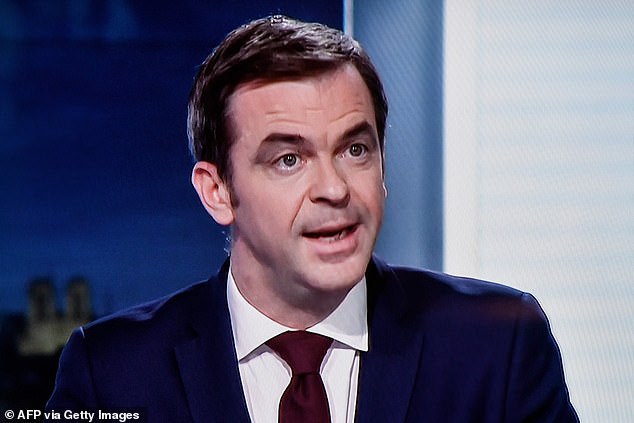 In a television interview on Tuesday, Health Minister Olivier Veran said that the French government is considering starting its curfew earlier in the evening in parts of the country. The curfew currently lasts from 8pm to 6am but the proposal would have it begin two hours earlier at 6pm

Rebuffing criticism on social media, a health ministry official said: ‘We have not set out for a 100-metre sprint but a marathon.’

‘The start is cautious but we will step it up and vaccinate on a very wide scale,’ the official said, noting that the authorities face a ‘very strong scepticism on the part of the French population’.

The official said there was no problem with supplies, with 500,000 vaccine doses now set to arrive in France every week.

The Ipsos Global Advisor poll was carried out in 15 countries online among more than 13,500 adults including some 1,000 in France.

With no let-up in infection rates in France, President Emmanuel Macron on Tuesday chaired a meeting of top ministers and health officials to discuss the crisis but ruled out a return to a full lockdown either nationally or in local areas.

Some regional leaders have pushed for at least local-level lockdowns to halt the spread of the virus.

On Tuesday, Health Minister Olivier Veran said that the French government is considering starting its curfew earlier in the evening in parts of the country. 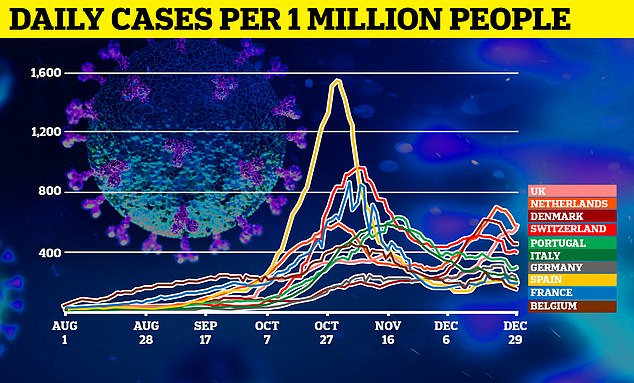 He told France 2 television that the existing 8pm-6am curfew could be extended to start at 6pm in the regions hardest hit by Covid-19. The proposed changes would begin from Saturday.

The number of hospitalisations for Covid-19 also rose on Tuesday to 24,743, as warnings came that this could rise still further due to mixing at end-of-year holiday gatherings.

In neighbouring Germany, authorities reported more than 1,000 coronavirus-related deaths in one day for the first time since the pandemic began.

The national disease control centre, the Robert Koch Institute, said on Wednesday that 1,129 deaths had been reported over the past 24 hours.

That exceeds the previous record set a week ago of 962 and brings Germany’s total death toll to 32,107.

While delayed reporting of statistics over holidays and weekends is often an issue in Germany, the latest figure fits a recent pattern of high numbers of deaths. 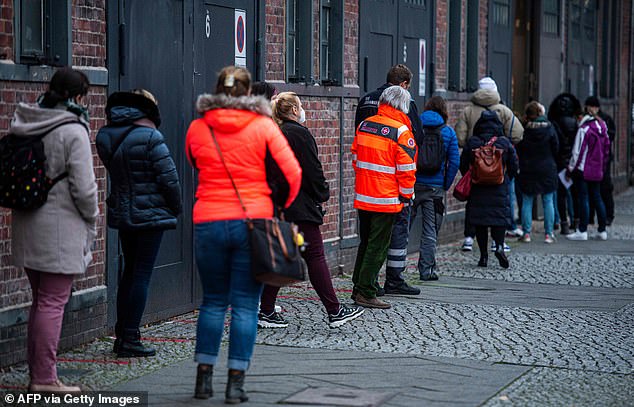 On Wednesday, German authorities reported more than 1,000 coronavirus-related deaths in one day for the first time since the pandemic began. Pictured: People queue in front of one of Berlin’s vaccination centres in Treptow, eastern Berlin on December 29 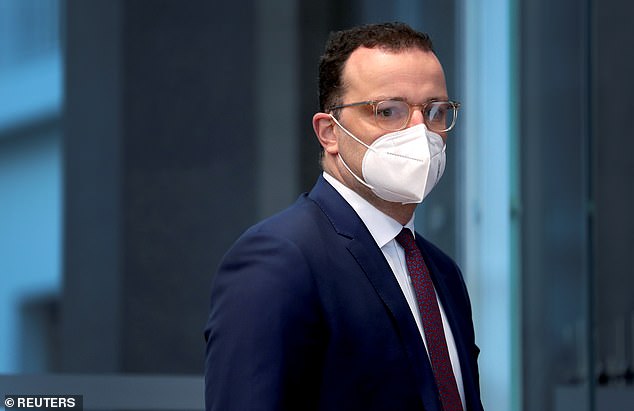 Germany had a relatively low death rate in the first phase of the pandemic but has seen hundreds of deaths per day in recent weeks.

Among major European nations, Italy, the UK, France and Spain still have higher death tolls but Germany’s health minister said on Wednesday it had a long way to go before things could return to normal.

‘The infection and death figures show that we are still very far from normality,’ Jens Spahn told reporters in Berlin.

‘I don’t see how, in this situation, we can return to how things were before the lockdown,’ he added.

A shutdown that was tightened on December 16 with the closure of schools and most shops is scheduled to remain in place until January 10.

It appears almost certain to be extended when Chancellor Angela Merkel and state governors review the situation next week.

The disease control centre said 22,459 new coronavirus cases were reported over the past 24 hours. 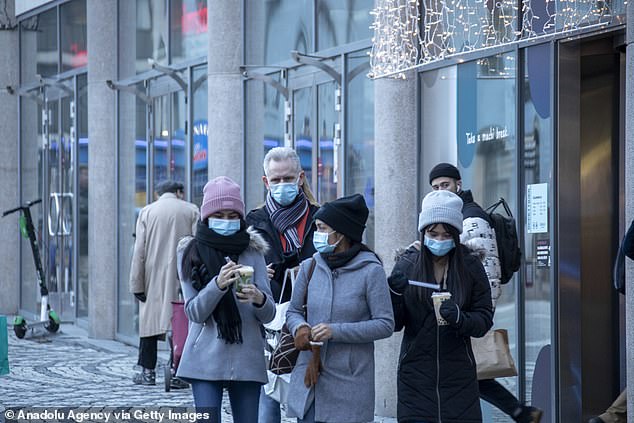 Sweden also set a grim new record with 205 deaths from Covid-19 recorded on Tuesday – a new daily high in the country which has largely relied on voluntary social distancing to control the pandemic. Pictured: People wear masks while out in central Stockholm on December 23 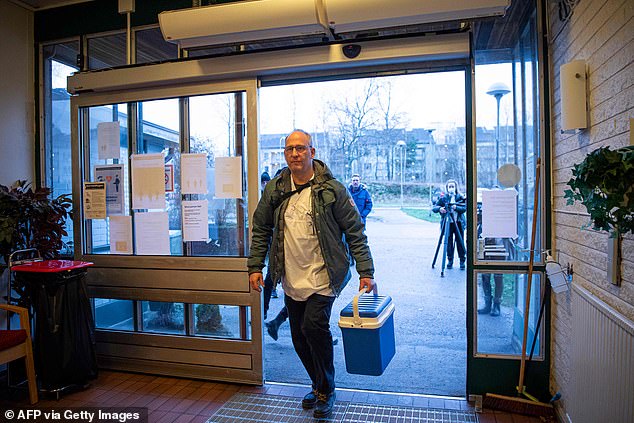 Sweden is considering a new law that would give the government power to close shopping centres and public transport in a bid to curb the spread of the virus Pictured: Dr Michael Craftman arrives to a carehome in Nykoping, Sweden, on December 27 with doses of the Pfizer-BioNTech vaccine

That is slightly lower than a week ago, but lower testing of non-acute cases over Christmas may also play a role.

More than 35,000 infections were also recorded on Tuesday, a day after the Swedish government proposed a new law that would give it the power to close shopping centres and public transport from January 10 in a bid to help halt the spread of the virus.

The new law is in sharp contrast to Sweden’s approach thus far, which has relied mainly on voluntary social distancing measures, setting it apart from most other countries in Europe where enforced lockdowns were imposed.

‘In very serious situations, the government will be able to decide on more extensive measures to prevent crowding,’ Health Minister Lena Hallengren told a news conference.

‘That includes the closure of shops, public transport, shopping centres, or other kinds of businesses that fall under the new law.’

While the government has stressed its faith in Swedes’ individual sense of responsibility, it has also lacked the legal tools to take a tougher stance.

Sweden has now seen 8,484 coronavirus deaths, a rate per capita several times higher than that of its Nordic neighbours, but lower than several European countries that opted for lockdowns.